A coming of age story about a young street rat, named Oops, living in the medieval city of Castlebury. With the help of his friend, a giant rat named Plague, they set off on a quest to find his family and where he belongs. Along the way the encounter angry Knights, Hec Hounds, Gryphons, and Magic.

Oops Comic Adventure is about the quest of a young boy to find his family, in a medieval fantasy. Along the way he makes friends with odd characters & learns the true meaning of family.

The FINAL Week of our Work-cation! This week we’re sending Issue 4 to the printers and will have copies people can purchase in the next few weeks. Yay! And we’re still plugging away on Issue 5. We’ve recently reached 450 total subscribers on Tapastic! We’ll be celebrating with another Art Request Livestream this Saturday around 4 pm EST. Check an eye on our wall post for the link on Saturday.

If you’re already a fan of Tapastic.com, think about following Oops on Tapastic too. Now with Tapastic’s Ad Revenue program, just by checking in and reading Oops for time to time, you’re helping us towards earning a living through comics. Thanks you guys! <3 And thank you, Megan, for helping us fill in the gaps while we work like crazy people to get the next issue ready and then some. <3

This week's special guest comic is by Megan McKay, the creator of the hilarious comic series Doodle For Food. I love her bite size fun humorous gag strips. If you like witty humor, give Doodle For Food a try.

Week five of our Work-cation! This week, with the help of Eddie Jensen or Sketchmazoid of Grapple Seed, we finalized the coloring of issue 4! Be on the look out for an announcement on how you can get your hands on a colored issue in print in the next up coming updates. Thank you guest artist for helping us fill in the gaps while we work like crazy people to get the next issue ready and then some. <3

This week’s special guest comic is by Sugar Fiend or Samantha Chapman! One of my favorite people on Tapastic and creator of the beautiful comic series, Silversong. If you like Oops, you’ll love Silversong. When I go to post my “thank you for subscribing” images on our subscriber’s walls, I always usually see a Silversong thank you post lol

Silversong is an high fantasy adventure comic following the tale of one girl with prophetic abilities as she blindly stumbles into a dangerous plot to tear down The Walled Kingdom.

Week four of our Work-cation! This last week has been a mad dash to prepare for Free Comic Book Day happening TOMORROW! O.O Jeramy and I are planning on divide and conquering the day by tabling at two comic book stores. Jeramy will be at Acme Comic Superstore in Longwood, FL, and I’ll be at Tate’s Free Comic Book Day Fiest in Fort Lauderdale, FL. We’ll have printed issues for sale, offering commission sketches, and as always, giving out Free Mini Comics! Thank you guest artist for helping us fill in the gaps while we work like crazy people to get the next issue ready and then some. <3

This week's special guest comic is by Jax Nguyen! The super nice, amazingly talented, and hilarious sense of humor creator of Not Quite There. I highly recommend following her comic series if ghosts, supernatural, and humor are up your alley.

Not Quite There is a story about a kid named Ant who is unexpectedly thrust into the world of ghosts and the supernatural. With the help of a rather unusual ghost named Chell, Ant attempts to figure out why he can now see ghosts…and various other things.

Available on both Tapastic and on her official site!

Week three of our Work-action! This last week has been crazy busy. Working on layouts for issue 5, mobile optimizing our official webcomic site, and preparing for Free Comic Book Day where we’ll be tabling at two different stores. Thank you guest artist for helping us fill in the gaps while we work like crazy people to get the next issue ready. <3

This week's special guest splash page is by Wendy Martin! She is amazingly talented. Her comic is called Kappa Comic. If you like merfolk and a fan of aquatic worlds/creatures, it's a mandatory MUST that you read Wendy's comic.

Kappa is about kingdoms of Merpeople and their fight for survival against giant sea creatures and religious war. It follows the story of a fish boy named Kappa as he journeys through the Eastern seas looking for a home. Because of his strange, brightly colored tail, Kappa constantly attracts the attention of ocean predators, so no kingdom has ever accepted him into their territory. However, every encounter with a giant beast has taught him each creature’s weakness and unique ways of defending himself.

Week two of our Work-action! I have thumbnailed out the first part of issue 5 and we’ll be working on constructing pages this week. XD Thank you guest artist for helping us fill in the gaps while we work like crazy people to get the next issue ready. <3

This week's strip is brought to you by the letter; M.
M as in MonkeySkull! The creator of the action packed humorous comic series ABZeek. The series follows Zeek, an alien from the planet Knox. Imprisoned for her crimes against the people of Knox, she escapes and finds her way to Earth where she meets a human named Alex. The two find themselves in a constant stream of bad luck, no thanks to Zeek. However, she seems to always have a trick up her sleeve to help SMASH, BASH, PEW PEW, KA-BOOM! their way out of trouble again. 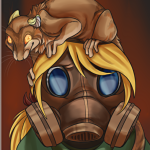 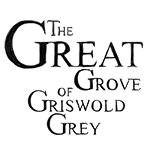 The Great Grove of Griswold Grey

All I Wanted To Do Was Take Over The World 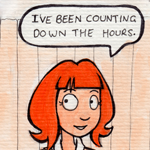