A cliched webcomic about games, life, and the whole world in general.
Last update: 2 days ago, 11:00 PM 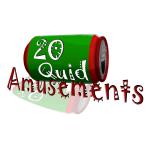 This webcomic dedicates itself to parodying the funny and illogical parts of games. It also sometimes dabbles in the problematic lives of the average (or rather extreme) gamer. You'll probably need an acquired taste, but give it a try, you might just like it.

DanVzare
I'm awesome, let's leave it at that.

I can't be the only one who watched the intro cutscene for the zombie mode in that game, and thought: "Wow... these people are idiots."
This is probably a much more realistic take on how that cutscene would've played out.

Also, today's my birthday. :D
Happy birthday to me.
This is the second time my birthday has landed on a Wednesday since starting this webcomic.

Hey, violence is still violence in my book, regardless of how it's portrayed.
Which is something I'll never understand when it comes to other people.

For example, this is basically all rating systems in a nutshell:
"Oh my god! That's way too violent to show to children... oh hold on a second, that's not blood. Blood is red, and that liquid spurting from all of those injuries is black. That's perfectly fine for children. Sorry for my little outburst, I thought it was blood."

All of the FromSoft games have very slow and clunky controls in my opinion. Although it's obvious why that is. If the game was fast and fluid it would either be too easy, with you dancing around your opponents while button mashing, or it'd be too hard, requiring impossibly fast reflexes to dodge or counter any incoming attack.

So in other words, I can clearly see that the controls are slow and clunky by design. It gives you the time to process a situation and react accordingly, and therefore allowing you to more easily master the gameplay, while simultaneously preventing you from button mashing your way to victory. It's quite commendable game design.

This is pretty much my opinion on Burger King, verbatim.
Although I've only ever been to Burger King once, and it was well over ten years ago. So who knows, maybe it's changed, or maybe the one place I went to was really bad.

Also, does the rest of the world call them bread buns?
If not, what else are they called?

You know a game is good when you can remove one of its main elements and it's still fun. For example, someone made a mod for Doom which removes all of the enemies. They literally removed the "Shooter" from "First Person Shooter", and guess what... it's still fun to play. It's nowhere near AS fun to play of course, but it's still entertaining. That's the hallmark of a great game.
(As another example, Left 4 Dead is a multiplayer-focused game that's fun to play in singleplayer.)

If difficulty is that important to the Souls games that removing it would ruin the game. Then I'm sorry... it's obviously not that great of a game series. But I'm of the opinion that the Souls games would still be quite fun if they were ridiculously easy, and that it's just the elitists being annoying a-holes as usual. Someone who's played the games using hacks will have to tell me if I'm right though.

Now, am I the kind of person who thinks the Souls games should have an easy mode?
Not really. If you don't like the games as is, I highly doubt making it easier is going to get you to like it more. As a matter of fact, it'll probably just highlight the things that made you dislike it in the first place. Besides, if they did add an easy mode, you do realize they'd just call the current difficulty "Easy mode", and then add a new normal mode which is even more difficult.