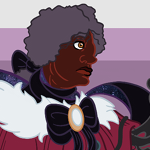 Amira has lived in the Fairy Realm known as the Kingdom of Dolls for many years now. While she does know she was born on Earth she does not remember much of her former life. This isn't much of a problem though since she is content with her job and lot in life. However, this all changes when a Nutcracker is taken to court before the King of Rats, accused of murdering his wife along with the former human prince and princess. To save this strange doll she is stricken with a terrible curse and that is only the beginning of her problems.

firebird963
Hey, I'm just a beginner comic maker who's trying to do a webcomic in order to practice so when I do my own original work it will actually be good.


Most recent comments left on Amira & The Nutcracker: The Cursed Maiden

As of how the script is written now yes there will be nudity though it takes a while to get to that point. I'm hoping by chapter 1 proper I'll have a full list of trigger warnings I can put up on a page so people know what they're getting into lol
Left on Page 5

This looking cool ,
Will this comic have nudity (like uncensored breast or normal/immersive naked scenes but shouldn’t be censored like , not explicit ones )? According to that N symbol in comic fury
I’m fan of it
Left on Page 5


Visit my Patreon to view pages early along with some behind the scenes stuff!

Edit: There's going to be a bit of a hiatus and I'm really sorry about that. My dad is leaving for a job in another city and while we're all very excited about this opportunity it means I'm going to have to do a lot more housework to make up for his absence. I'll still be working on the comic in the meantime. Would like to have more stuff by February. Thank you for your patience
Left on Page 5


Visit my Patreon to view pages early along with some behind the scenes stuff!
Left on Page 4