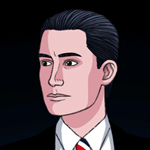 "Checkmate" is a webcomic set in the universe of "Twin Peaks", the famous 1990s TV series created by David Lynch. Set four years prior to the series' events, it serves as an unofficial prequel, exploring the backstory of "Twin Peaks"' main character Dale Cooper.

SYNOPSIS:
Pittsburgh, 1985. FBI Special Agent Dale Cooper and his partner Windom Earle are assigned to protect Earle's wife, Caroline, after an attack was made on her life under mysterious circumstances. As all three of them move to a safe house for Caroline's protection, little do they know that things are about to get much, much worse.

UPDATES EVERY WEDNESDAY!
Other

CherryPie
My name is Lili, and I'm a 26-year-old freelance illustrator and comic artist, also working as a registered nurse in Paris, France.

When I'm not busy drawing things or saving people's lives in the E.R., I sail the Seven Seas on wooden tall ships, write movie reviews, watch TV series and eat a lot of chocolate.


Most recent comments left on Checkmate