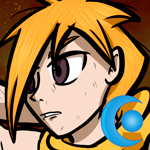 Creda tells the story of three survivors living in the last populated village working to rebuild civilization again following the great Alchemy War of the past.
That battle would pit heroes against a powerful enemy wielding the four Elements of Alchemy and everything on the line.
The battle would be lost however and the world would begin its steady fall to destruction.

Years later, a miracle appears when one of the heroes in that final battle suddenly appears in the present day.
The three survivors band together with their new ally and experience something they’ve never had before: HOPE!

Lady Ani
Ani is a Southern California native who has been drawing ever since she was 8 years old. As a total 90’s kid, she grew up during the prime of Power Rangers, Toonami anime, Beast Wars and other shows.

She currently works as a freelance artist and illustrator having been drawing in various fandoms like Pokemon, MLP, Xenosaga and Golden Sun. Her true passion comes from creating her own stories and keeping busy in other avenues.

Not only is she a digital artist, but also devotes her personal time to photography, cosplaying and working at conventions year round.

Little Brother!
Introducing Garet's little brother Aaron. Garet was one of the eight Adepts in this story who was still missing from the disaster.

A Million Miles Away

Hole in her heart!