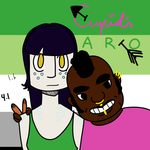 A slice-of-life webcomic about two aromantic individuals, and how they fit into the world.

Baz is an android. She's aromantic-asexual, works in and lives above a plant shop with her two cats, Plof and Hughey Louie and the Sneeze (Lou for short). She likes humans and humanity, but is very comfortably an android.

Djus is her best friend. Ey's a nonbinary human, aromantic-bisexual, and works in a cafe/bar. Ey is extremely friendly and outgoing, and likes talking Baz through the more baffling aspects of humanity.

Pigie
24 years old (b. 1996) Norwegian artist-in-training. I live with my cat Snerk and some perpetually dying plants, I love graphic novels (among a host of other things), and I'm currently writing my own. While working on that, I'm drawing and publishing a slice-of-life comic about two aromantic individuals, Baz and Djus.

This is the first page of several connected ones! Still standalones, but they're actually going somewhere now.

Baz has a couple of Android Powers (TM), one of them being mad hops. She's also surprisingly a daredevil!

Author Note
Pigie, 26th Oct 2020 On Bruise On Bruise
I do this all the time. Same with bad smells!

Baz was inspired by Data off of Star Trek. I love Data, especially his little observances of humanity. His quest to become a human has kind of annoyed me, however. So Baz is an android who finds humans affectionately fascinating, but has no wish to become one.

Plof is an orange tabby. He's been through some shit - he's missing and eye and an ear, and half his tail. He's also the friendliest.

Hughey Louie and the Sneeze (Lou for short) is a lykoi, and very protective of both Baz and Plof. Baz found them on the streets, so they've always been together.

This is Djus' place of work, known only as the Place, or the Squiggle, due to the unreadable sign. I'm not good at backgrounds yet, but ye will see more of it!

I doubt I'll keep up the colouring, but I started and then I couldn't stop haha.