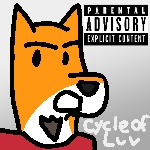 Cycle of Luv is a love story that also is not a love story, just a comedy comic. Join Maxx and his friends as they spend their lives in 2087, which feels more like reality than any cartoon.

The comic update dates can vary!


Most recent comments left on Cycle of Luv

Yes, there's a budget for everything!

So as you guys know, or may not have known, the comic is going through a phase. With it, plots that have happened already change, characters change in design/name, others don't get the cut anymore, and some other huge changes...

These three are the first to see their new changes:

Selena J: Has received a new hairstyle, a new body and design, and is a lot more sassy!


Shawn Acorns: Previously known as Shawn Skunky, he is now a squirrel (Because throughout my whole life I've seen more of them than skunks). He is still the same character though.

Friday Pitiful: Now has light blue hair, has a more bushy tail, received breasts, and is a little lighter so people can see her face better.

Why those three first? Well, I shouldn't say, but the next chapter will involve them mainly.

Also to say, these changes aren't final yet, so keep an eye open.

And lasty, I promise we will get back on a regular schedule soon!

Thanks again for your concerns, Ari-Dynamic (or whoever you are). I don't blame you when say I'm not an artist since I'm more of an asset drawer than an artist (An 'asset drawer' draws assets). With the retcon, I may look into limb drawings and try to work on them better.

Again, thanks!
Ari-Dynamic (Guest), 16th Sep 2021 On Possible Retcon?!
Reply
Its just you could probably be an OK artist if you just tweaked a couple things. Like the anatomy on the characters are sort of awkward especially the way you attempt to draw limbs (mostly the arms and fingers) and the way you draw females is pretty off putting too. Like you try to make the women look attractive but they end up looking cringy the way you draw breasts or hips. Like if you are aiming for this flat and "simple" art style, that's fine, but don't try to sexualize the character designs, maybe practice on the limbs a bit more on some throw away paper, also try and make everything look a little more smooth so it doesn't come off looking like an armature MS paint thing done by a kindergartner. Not to sound disrespectful but I'm just trying to give you some advice. Especially since art kind of isn't really your strong point.
Thisa Lucas, 10th Sep 2021 On Possible Retcon?!
Reply

Thing is, I already rebooted my comic (twice) and I don't feel a third reboot is necessary. And I do understand your issues with a retcon and I can promise you it won't be like that.

Also, the artwork will stay the same-ish. But instead of it being all basic, I will try to make things look more dynamic (focus on improving hair styles, change up how the characters look, and maybe consider addressing shadows).

I don't know if it's the real Ari-Dynamic speaking, but if it is, thank you for your comment. If it's not, then thank you anyways.