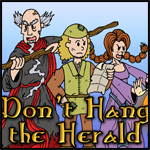 In a fantasy world where the names of people and places are either flowery sounding nonsense, unimaginatively literal, or just really bad puns, the king has just died horrifically.

Much to the kingdom's dismay, the burden of the throne falls to the king's brother, Kral, a man who is easily annoyed, completely dismissive of any advice, belligerent, erratic, and now wielding complete power.

Gods help them all...

Alexander Halstead
I spent most of my high school career drawing Dragonball Z characters instead of listening in class, and even now I cannot tell you how to solve an inequality to save my life. During this time, I also started to develop my own characters, stories, and generally became a full time daydreamer/airhead.

To this day, I don't know how to turn my brain off. The constant stream of random ideas and stupidity needed somewhere to go... so I figured, hey, webcomics.


Most recent comments left on Don't Hang the Herald

Ahh... so a late comic, and filler no less. I almost had this up on time, however a bout of procrastination on coloring hit me rather hard this time around. In fact, coloring is the most time consuming part of the process for me.

The line art is hand drawn, which depending on the complexity of the drawing, can come together rather quickly. Inking takes a bit more time, as I'm incredibly careful not to screw it up (which I usually do in one small way or another). But the comics are in fact colored on photoshop... and I do not have a drawing tablet. I literally color using the touchpad on my laptop. I am aware I am using the worst possible method of coloring apart from maybe whipping out a box of crayons, which would look bad, but would indeed be much faster.

But anyways, this comic was inspired by my wonderful girlfriend, who gave me the initial idea for something involving Ava's little fire breathing bat-cat. When coming up with ideas for these characters, unfortunately it has been Ava, Egma, and the cat that have gotten the short stick so far in the series (when compared to King Kral, Draz, and Willem, who get far more "screen time"). I have a few plans for them in the future, but for now we'll make do with this funny little "aside" comic.

Yes, King Kral would certainly benefit from having a voice of reason to help keep him in check!
Haegan2005, 1st Apr 2018 On Comic 23 - Terrible News
Reply

Well, it looks like the readers and the Prince agree. It is a DISASTER!
Alexander Halstead, 1st Apr 2018 On Comic 23 - Terrible News

New Character! Behold, the crowned prince and new heir to the throne of Alandir!

Many, many months ago, I drew up a few designs for King Kral's extended family, only one of which (the Late King Kull) has been featured so far. So I thought it would be fun to go ahead and introduce King Kral's son and eldest child.

I almost forgot to upload this strip in fact. The last 3 have been posted around 5 am Eastern Time in the US, but this one was uploaded at 2pm because I was out the night before and totally forgot! You are truly dealing with a professional here.

I might also take a moment to talk about the other character in this strip... The messenger with the curly hair and the skull-cap. He is not related to Willem.... He has no name, and may or may not ever be featured again. I can only think of so many different people with this simplistic art style, so after I drew it, my GF asked me why Willem had gotten so fat... so I made sure I colored his hair differently because yeah.... he's not Willem. Curly hair just seems to be an on-going trait in this series...

IDK, maybe he could be a distant cousin of Willem's? 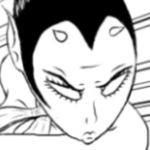 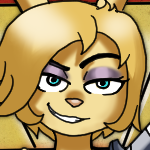