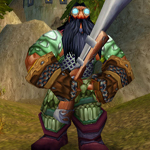 This is nothing more than a Resurrection of Dave "Fargo" Kosak's hilarious comic series he did at Gamespy before he left to go work for Blizzard Entertainment as content developer on World of Warcraft. Gamespy has since ceased web publication & removed this comic.

Far as I know, it is not posted anywhere else on the Internet in a simple, clean and sorted in its original chronological order. You can usually find it in some sort of web archive where its still combined with Gamespy junk. I sincerely hope that Mr. Kosak doesn't mind me resurrecting his old comic series for Old and New Wow Players to enjoy.

This series and the one after this, "Flintlocke VS. The Horde" contain many panels that I will rebuild and post as often as I can until the entire archive is rebuilt. The only thing I could not archive and re-post were Mr. Kosak's commentary on each comic panel.

So here it is, in its original unmodified glory - Enjoy!


Most recent comments left on Flintlocke's Guide to Azeroth

Glad to see it still to be found mon.
Left on Episode 1: Guide to Maiming Meat that Walks - Part 1

Asghard (Guest)
11th Dec 2018
"I love you."
Thank you so much for this. This is the reason I started playing WoW, almost 11 years ago (after having read this comic back in GameSpy). I hope we can continue to enjoy this masterpiece ofr along, long time.
Left on Episode 1: Guide to Maiming Meat that Walks - Part 1