Fuzzball and Scuzzball are brothers who live in the gritty urban hell that is Happy City, New Jersey. In theory, they are private investigators. They have wacky misadventures.

L8on
I live in Cincinnati, Ohio, with my wife and children.

L8on, 11th Aug 2016 On Leaving Happy City
And this is the end. Will Fuzzball and Scuzzball find happiness in Hometown, Ohio? I don't know. It's up to you, gentle reader, to decide for yourself.

Dale French co-wrote and penciled the last three pages; thanks for chipping in, old chum. And thanks to Dale, of course, for creating or co-creating most of these characters, and helping to bring them to life over the thirty years. Even when he wasn't directly involved in creating the comic, he was an inspiration.

Thanks to Steve Johnson for originally commissioning a Fuzzball & Scuzzball comic strip for The Death Cookie; thanks to Ray Forsythe for countless hours of technical support; thanks to Matt Kish for scanning things for me back when I didn't have a working scanner, and for lobbying tirelessly for the return of Big Chin McIlhenny; thanks to my loving wife Alice for her support, guidance, and coloring assistance; thanks to Josh Burnett and Jeffrey Johnson for contributing pages to the Hell Hath Lots of Fury story; and thank you to everyone who read this comic.

I'm going to miss it.

Don't be a stranger . . . check out more of my artwork at the Seeing Calvino tumblr. For some more Fuzzball & Scuzzball-related fun, you can read a few more Weirdo-Freak stories at the Weirdo-Freak web comic. Another character from Fuzzball & Scuzzball will be showing up one of these days in my web comic Laser Brigade, which I recently resumed updating. And, for a twice-weekly fix of thrilling adventure, be sure to read The Electric Team by me, my daughter Abby, and Samantha Albert.

Thanks again for reading!

Author Note
L8on, 11th Aug 2016 On The Bus Station
And so we reach the end. Like with last week's episode, this page was written and drawn by Dale French and me.

Author Note
L8on, 4th Aug 2016 On Last Night in Happy City
For the last two installments of Fuzzball & Scuzzball, it seemed appropriate that Dale French and I, the two guys who created the characters, should both pitch in. So I drove down to Kentucky and we spent an enjoyable afternoon working on these.

This page was a total collaboration. Based on the strip Dale had written a few weeks ago, that brought up Fuzzball's sexual orientation, I thought we should do a comic about Fuzzball finally coming out to Scuzzball. We talked it over and shared ideas, came up with a plan, and then I made a rough sketch of how we could break it down into panels. Dale penciled the panels and wrote the dialogue. Later, I inked his pencils and colored the page.

So what you see here is a combination of both our efforts, blended together into something neither of us could have done on our own. It's been a long time since we collaborated that closely, but it all went smoothly, and we had a lot of fun doing it.

NEXT WEEK: The final episode.

Author Note
L8on, 28th Jul 2016 On Tell Me the Future
This is the conclusion to my solo run on Fuzzball & Scuzzball. I've done what I set out to do. I hope you enjoyed it.

NEXT WEEK: I am joined by Dale French, co-creator of Fuzzball & Scuzzball, as we check in on Fuzz & Scuzz the night before they leave town.

Spargo took Ricky off to do a lot of drugs here; Ricky OD'ed and transcended this mortal world here. Check that second one out; it's maaaaaaybe my best looking page of Fuzzball & Scuzzball. 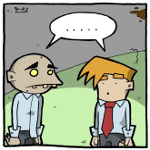 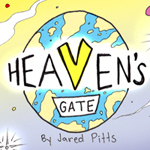