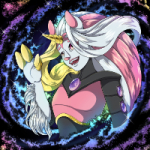 One part happy, one part somber, 10 parts "flavour of the day."

Intergalactic Ishkabibble is an anthology series dedicated to a little bit of everything: one-shots, short stories, single-page comics, jokes, strips, and fledgling ideas.

As it is dependent on spontaneous inspiration, there will be no set update schedule. Currently updating daily as I transition from Smack Jeeves.

It just occurred to me that this might be the first comic I ever made in clip studio paint. If you haven't tried CSP, get the trial, get hooked, and buy it on its next sale. It's a one-time purchase and so damn versatile - it's an immediate game changer.

Yes, Stella and Luna's names are an homage to the bat book. =P

See you tomorrow for the start of another 8-pager!

The jewel planets in the third panel are a callback to the cover of issue 1. I thought I was being clever.

I never really created backstories or anything for the friend group, but I kinda really want to?? Gotta swat my muse with a newspaper for tempting me like that... too much other stuff to work on.

This story was inspired by two things: the random prompt phrase "irregular orbit" and Undertale.
I didn't mean to crib directly from the game, but I had just finished it when I was throwing character designs together for this (none of which took longer than like 10 minutes because I was so fired up, although some are actually friends' characters!) and before I knew it I'd created like... Underground High or something. This was way before Deltarune, of course, but Deltarune still did it better. :P

I've been uploading these pages in advance so I don't miss one, which also gave me some time to throw together a new title page!
Originally there was no distinction between the old printed material and the stuff I started producing after I graduated, so I'm happy to finally have this as a marker. Hope the switch back to 2015 art tomorrow isn't too jarring! =P
For someone who hates drawing title pages, I think I did pretty well here. <3

Author Note
TrinitySilph, 5 days ago On Under a Violet Moon 8 [FINALE]

And that's the end of Issue 1 and the last of the printed material!
See you tomorrow for the start of Issue 2!