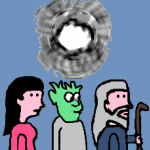 Jenni is a comic about the author that sometimes chronicles real life experiences and sometimes veers far from reality.


Most recent comments left on Jenni

We're finally reaching the end of the first story arc. Hopefully I'll have it out by the end of the year. It would be a nice way to celebrate the comic's fifth anniversary (in year, not month, as I completely missed that).

Author Note
Jenni, 4th Jul 2015 On Returning With A Bang

Wow. I can't believe it's been over a year since I updated. Sorry about that. Since it's independence day in the United States, I decided to celebrate by releasing a new strip. I'll try to make the next one before 2016. o_o

Ever since I first created Doug the Ogre he has been one of my favorite characters. He is also mostly a clean slate. The only thing ever said in the Jenni comic is that he’s not necessarily good or evil, just “mostly good” (and that he’s the size of an average human, whereas the other ogres are much bigger). Other than that, he’s completely free to mold as anyone sees fit. So, feel free to do so. Doug the Ogre is now released for all under the Creative Commons Attribution 4.0 license. And , since I used her in the first Doug the Ogre comic, I’m also releasing Doug’s mother for all under the Creative Commons Attribution 4.0 license as well.

There is now a new collaborative comic called Doug The Ogre. I'm licensing this under the Creative Commons Attribution-Sharealike 4.0 license, so you can do whatever you want with it, commercial or non-commercial, but everything you create based on it must be licensed under the Creative Commons Attribution-Sharealike 4.0 license too (that way all pages of the comic that are made are covered under the same license).

So, with all that said and done, here’s the strip that leads to the Doug The Ogre collaborative comic. Feel free to contribute to that comic as you see fit in your own style. :)

Major Bueno is having a party, and everyone's invited! We're going to be there! Join us by submitting your character to the Major Bueno Party!

Amazing!! I remember you telling me about this way back when! Love it!