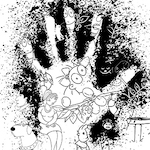 
Most recent comments left on lefthanded

I knew the song wasn't really about salt, but this is the chain of thoughts that went through my head anyway.
Here’s the song…
https://www.youtube.com/watch?v=4IfvBmLyhkw

A Dr. Strangelove scenario was more likely back in the 60's, I think-there are too many safeguards now, but still, hacking is not out of the question. Assuming someone would be both capable and mad enough to do that. (Actually it's not so bad at the epicenter ...instant end, not having to deal with post apocalyptic humans and being in basic survival mode all the time).
area5.1, 2 days ago On Uncensored
Reply

The idea was huge late 60s and into the 70's. It brought about Planet of the Apes films, Dr Strangelove,The Time Machine. Obviously we knew about what happened at Hirishima, but those were small proof-of-concept devices. The scary thing for me was learning about the Cuban Missile crisis and how close we came to it actually happening with really powerful weapons.

The idea of mutual assured destruction was a powerful Idea though, and (Dr Strangelove aside) it seemed unlikely to ever happen. Besides it was outside my control, so little point in worrying about it.

We had the Greenham Common women protesters camping out at a US Airbase trying to get nukes out of the country which was regularly on the news, and that went on for years.
dirtyrobot, 2 days ago On Uncensored
Reply

It seems like the situation is repeating itself now. There are definitely many similarities.
area5.1, 2 days ago On Uncensored
Reply

Yeah - my father was in and out of work, the news was filled with violence and as Thatcherism took hold the divide between the rich and poor increased. Strikes were a regular thing and all the underfunded public owned services were sold off one by one. Old industry was dying, unable to compete with overseas prices and anything valueable was sold off.

Of course, the Yuppies and hedgefund bankers did very well out of it.

Dictators absolutely fear the media because their grip on power relies on controlling absolutely everything, including what people think. There is no such thing as a benevolent dictator.