Finding happiness in this world.
Last update: 2 days ago, 7:42 PM 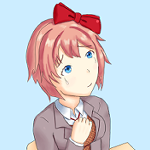 A group of ordinary high school students try to continue their lives in the aftermath of a shattering revelation and its traumatic consequences.

This is a fan webcomic taking place after one of the possible endings of the parody/horror/deconstructive visual novel "Doki Doki Literature Club!" The comic itself is drama/comedy/speculative fiction; not as dark as the original, but not consistently cheerful either.

Ville V. Kokko, 2 days ago On Just as planned On Just as planned
I remember imagining this string of expressions way back, probably last year, when I was coming up with ideas for the comic. And now it exists outside my head.

I kind of expected some reader might have wondered about this same thing. Of course, they might have just done that but not commented on it anywhere.

Now that Sayori isn't in such a tragic state that she's about to kill herself, I find she's great for combining humour with darkness. She's really not in a good place in that last panel.

The fact that you can see the far edge of Sayori's desk in the first panel reveals that the "camera angle" is impossible in that the desk is actually right up against the wall, so it's like you're looking through the wall. I don't know if that kind of thing is frowned upon, but it seems like I might as well do it if that's the perspective I need.

Author Note
Ville V. Kokko, 8 days ago On Hopefully secret On Hopefully secret
Ive has given up on questioning the weird stuff Sayori says, at least while he's in such a good mood. And she doesn't worry about mentioning such things to him, since he won't understand anyway. Even if she actually said she's communing with the ghost of the club's original and now counterfactual president, he'd just think she's being weird.

Author Note
Ville V. Kokko, 11 days ago On Not literature On Not literature
I pointed out in the comment for comic 13 in chapter 1 that there's a suggestion there that some version of the side stories has happened in this timeline, and there have been other hints since then. Notice how this is implying even more: if Sayori has done that reading with the others, that suggests that a great deal of the side stories happened, although without Monika since Sayori is remembering the right timeline this time. Even though the side stories were supposed to be in their own timeline...

And yes, you could meaningfully say video games can be literature.

Author Note
Ville V. Kokko, Two weeks ago On Like you On Like you
I'm lagging behind, but two per week would let me finish this chapter on the week before Christmas week, and I want that, so here we are, after some intense work and creative copy-pasting. I'll try to make and post the next comic tomorrow. Or if not then, on Friday.

Compared to what happened when these two were last walking home, it's ironic Sayori is currently oblivious to some subtext that really should be obvious all things considered.