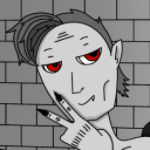 Doctor Michael Morbius is one of the most genius minds in the world. He’s made so many advancements in medicine that the world at large has become a better one thanks to him. However, he’s a total recluse, so nobody has ever been able to come in contact with him since he started being a scientist. Could it have to do with a mysterious experiment he’s been working on ever since he entered the field? Could it have to do with a long lost love? Or could it be that he’s simply going mad? Whatever the case, things are about to get completely and utterly Morbed.
———
A rewrite of the 2022 trashfire that was Morbius. The movie was a trainwreck BUT some ideas in there were so interesting that I just had to rewrite the whole thing so that those ideas could stand out more. You’re welcome.
Horror Action Supernatural LGBTQ+ Vampires Morbius Rewrite Fix Fic Disabilities

Happy Turkey Day, guys! I decided to draw Martine and Michael as MST3K-style robots because the MST3K marathon is objectively the best part of Turkey Day (to me, at least). Oh, yeah, and I did kind of spoil that my version of Martine is a lesbian, but who cares, she’s already got more personality than the original.

Dear god, does drawing backgrounds make me want to tear my hair out. My comic page drawing experience be so fine, then boom, background layer.

Each chapter/act of this comic is going to have a cover with an image related to the events of that chapter/act on it. Can you guess what this one represents? It’ll come easier to those who have seen the movie.