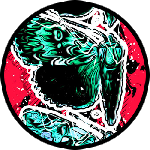 This is one of those strange web comics that takes a base concept and expands on it. Specifically, this comic addresses the patterns of never, of being told one can never be something, never be not something, and the adaptations thereof.

Butterflies, as symbols of change, and change often misrepresented as coming from a far-off, unnoticed source, seemed an appropriate base imagery for the work. The specific butterflies referenced here are from the Catalogue of the Lepidoptera Phalænæ in the British museum by George Francis Hampson, produced between 1898 and 1901.

They have been heavily modified, colored to suit, fiddled with, and adapted to purposes.

Change from a change. While tongue in cheek, the serious undertone here is that one need never… anything other than not breach consent, and those attempting to enforce otherwise are themselves breaching consent.

As I take this to press, Russia has invaded the Ukraine, and I’ve no idea what result will be. Breach of consent writ large already, layer upon layer. The best I can offer is that it’s generally a better plan to be kind to each other, and respect consent in all regards.

I hope you enjoy.

I'm glad this updated, I needed this today.