My Life Without A Jetpack is a biographical webcomic about MaGnUs' life, written by him, with art by Taibox (and sometimes colored by Mindy Lopkin). Published weekly in English and Spanish.

MaGnUs
Martín A. Pérez (AKA MaGnUs) writes short stories, articles, comics and radio plays. One of his short stories has been published in the book Contagion: War Stories, and an essay of his apears in "Teenagers from the Future: Essays on the Legion of Super-Heroes.". His articles have appeared online or in print magazines like Inforol, Ururol, Kryptonian Cybernet, and Strange Days, while he's currently writing for GeekGirls Online, G.A.S. Comics, and other sites. He co-produces and co-hosts a radio show about comics and related subjects, Perdidos en el Eter. An active part of Uruguay's fan scene, he's one of the creators of Montevideo Comics, the first local convention (since 2002), and one of the founders of Caballeros de Montevideo, which promotes RPGs through charity events. MaGnUs works in tech support, and is happily married to his wife Cindy, with whom he has a son, Gabriel, who ever since his birth has been marked to become yet another nerd... just like daddy!


Most recent comments left on My Life Without A Jetpack

What else can I say other that this was my first anniversary with my girlfriend, now my wife, and that it's been almost 24 years since we got together. She got me good with this present, and Maul is still on one of my shelves, now facing a same-sized KENOOOBIII. And no, she's not a sith, nor a jedi, luckily. Oh, and sorry for the two month plus hiatus, again, it wasn't Lisandro's fault, it was all me.

Music this time is, obviously, Duel of the Fates, by John Williams, conducting the London Symphony Orchestra and the London Voices choir. Of course, from the Star Wars - Episode I - The Phantom Menace's soundtrack (1999):

... and I'm over a week late. Sorry, guys. I like to show off my tattoo, and not everybody appreciates its beauty, I guess. Tomás is a grown up now, and I wonder if he has any tatoos himself, and if he scares any children with them. Tomás, I now have three tattoos in total, and more upcoming.

Music for this strip is "Fee Fi Fo", from The Cranberries' 1999 album "Bury the Hatchet". The Cranberries is one of my sister's favorite bands, so I'm sure Tomás heard their music while playing with my nephew:

Well, look at this, I'm only two days late! Lisandro keeps drawing strips, and I keep lettering and posting them late, but here we ware.

Yes, I had my wedding ring stolen on my honeymoon. Yes, it was because I left it with my flip-flops, like an idiot. Yes, it was because I went to the beach on my own after a whole week of cloudy / rainy weather in a supposed beach paradise. But, in my defense, I didn't have a say in choosing the honeymoon destination. My wife had chosen it even before meeting me.

I did get another ring made, and we used my wife's ring as part of the gold to be melted to create two new rings. That way, both our rings were present at our wedding. And I hope my ring (and my silver chain and cross) helped some Brazillian put food on the table that day. Or something...

And yes, I bleached my hair during my honeymoon trip.

This strip's music is "Loco Gringos Like a Party", from The Reverend Horton Heat's 2002 album "Lucky 7", because I looked and behaved like a stupid gringo:

Sorry we're late, once again, it's not Lisandro's fault, but mine. He's working at an incredible pace, and I just lag behind. Not much to say about this strip, it's just a sweet story from my kid's childhood.

Music for this strip is the aptly titled Wrong, from Depeche Mode's 2009 album Sounds of the Universe:

A little explanation about how I could be so cheap as to steal some mustard dispensers... here in Uruguay there exists a chain of restaurants (originally beer halls) called La Pasiva, famous for their hot dogs and hungarian-style sausages. But, above all, their famous for their signature mustard. Among other things, it contains beer, and the recipee canbe found on the internet nowdays, but who knows if you'll end up with a similar product.

But that is *one* type of mustard... then, why am I stealing *four* different types? Well, in 1992, a new restaurant called La Mostaza opened, serving hot dogs and providing FOUR different mustard types. This restaurant was (not sure if it still is) property of Uruguayan businessman Edgardo Novick, who would later try to get elected president of the country and failed miserably.

According to urban legend, when Novick was opening his restaurant, he poached one of La Pasiva's cooks who knew the secret mustard's recipe. Probably wanting to be more than just a copy of the original place, he ordered him to create four variants. I recall they were called stuff like "American mustard", "German mustard", "French mustard", etc. It is entirely posible that, beyond the probable German origin of the original sauce, none of these mustards had much to do with the actual types named like that. Back in 1992, Uruguay was pretty much isolated from the international community, barely touched by globalization... McDonald's had just opened here two years prior.

La Mostaza is still there, in long-distance bus terminal and shopping mall Tres Cruces, but it never became a chain, and I don't know if they still use the four mustard variants, or their "original" clone.

Oh, yeah, I swiped that sauce-holder with the four mustards just because, because I thought it would be funny. I wasn't drunk or anything, I hadn't even had a single drop of booze... nowadays, I'm not proud of what I did, but it's funny that I did the deed while wearing a tuxedo. In any case, the sauces were put to good use, particularly in hot dog nights with my buddies (that came out wrong). My parents never questioned where the mustards had come from.

This time, music is from Daft Punk's (I almost wrote Kraftwerk) 1997 album Homework, the hit single Around The World. Not only that song played everywhere back then, it's also a fitting song for a high-flying sophisticated spy: 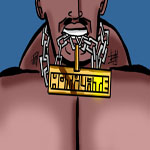 The Legend of Hotplate 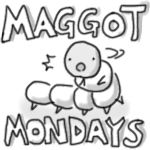