Cute Monsters and Food Puns with a side of Good Story
Last update: 2 days ago, 8:00 PM 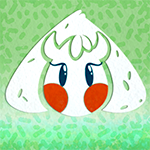 This story follows someone who is both! The story of a naive, cheerful monster trying to figure out who they want to be in a world of conflicting communities. Its got Cute Monsters and Food puns.

GameKnights
A Group of Friends challenging each other to make cool interesting comics.


Most recent comments left on Onigiri!

Welcome to Onigiri!
Thanks for reading or if I should be so bold, thanks for laughing. I'm equal parts nervous and excited to get this show on the road, but I hope you'll stick around to see where it goes from here.

Oh and a Happy thanksgiving. Thanks for celebrating with my weird food comic.