Worlds have crossed paths, leading towards potential disaster for both.
Last update: One week ago, 8:00 PM 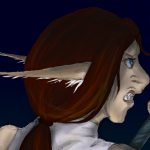 An experimental AU comic featuring characters from another world thrown into the magic-ridden and often-times dangerous world of Gaia. There's the matter of getting everyone back to where they're supposed to be, but that's not a straightforward task when Gaia has troubles of its own to ensnare even foreign inhabitants in.

Sero
Just another hobby writer and comic-maker when my attention span and day job allow me to be!


Most recent comments left on Onward

Sero, One week ago On 20
WHAT'S THIS, A COLOURED PAGE?

So, for more than one reason, this is the last update of Onward for the foreseeable future. I apologize to anyone who may have been looking forward to it continuing, but it is now on indefinite hiatus. I don't like to say 'never', however it's most likely not going to continue. I vowed however I would at least give an end to this chapter before stopping!

I maintain I did learn stuff while doing this, and I am definitely NOT going to stop telling stories. It's just wired into my brain, I like telling stories (be it comic or written)!! I'll probably pick up a new comic project in future -- if you're interested, come follow me on Twitter or devART!
I'm also currently trying - even if unsuccessful - to do NaNoWriMo (National Novel Writing Month) and the writing project could well continue into December depending on how long it is.

I may drop an update here if I do start a new comic project (or in the unlikely case I pick up Onward again).
CHEERS, THANKS FOR READING THIS EXPERIMENTAL COMIC ♥

Author Note
Sero, 8 days ago On 19
Nice to be considered equal with monsters, eh? But that's just the card kitsunes got dealt in Gaia. 8T

END OF CHAPTER, come back tomorrow for a bonus cover page and important news!

Author Note
Sero, 6th Nov 2020 On 18
It was really tempting to break my monochrome scheme and add some red to this page (and the last). I love the black/white/red combo, like the weirdo I am.