Some ordinary people leave the planet on an abandoned alien space ship, to save the ship's creators and, perhaps, Earth.
Last update: Yesterday, 6:00 PM 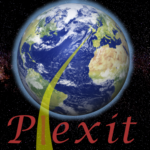 In its simplest form, it's "Planet exit" - it's a comic about a group of people who, saddened by political developments, are motivated to leave the Earth on an alien space ship and fix the legacy of another alien race that had an eerily similar past.

I started this comic messing about with the software on the now-dead Pixton Classic to see what it could do. I created a replica of myself to test the character creation system, then I created a scene entirely at random, which ended up being what's now panel 1 of Plexit. Then I pondered on what I would like to happen next. Panels 2 to 6 were born then, using default objects in the app, though the ship was originally just a re-colour of Pixton's flying saucer object.

I made most of episode 1 over the course of the afternoon and evening, with each panel being driven by what seemed a likely follow-on to the previous. Then I went to bed, intending to sleep... but, instead, I was still pondering on that comic. When I awoke the next morning, I had the whole back story that was told through volume 1, right up to when the three ships got together again.

I sketched out rough elevations of the ship on paper and went back to change panel 3, discovering that I needed premium membership to put in my own images, so I set about building the low-quality frontal shot seen in several early episodes, coming up with a direction for the story as I did.

I had a choice - to leave my character in or make up a fictional one. Laziness won - why make people up when you can use real ones? So almost every human character is based on a real person.

Jalnor
I've been making comics since late 2016 when I discovered the now defunct Pixton Classic (though, really, I was making bad stick-man biro comics on my lunch break as long ago as 2005 if I stop to think about it) and I seem to be quite the approval seeker at heart. I love logging on to a comic site or social media site and finding that my creations have lots of positive ratings or comments... which hasn't happened so much recently, but I'm sure it'll get there again.
Outside of comics, I live just to the east of Glasgow and like to play games on my computer (I sometimes stream with my cousin and a friend on his Twitch channel) and play Munchkin with my partner, hoping to go back to monthly games nights in a Glasgow pub with lots of awesome nerds once the pandemic is over.


Most recent comments left on Plexit

Guest (Guest), Two weeks ago On 2x07: Setting The Bar Low
Reply
Ah, the old "put the dead man's diary in the library" trick. I like how you've subverted the normal sci-fi trope of humanoid aliens by making these guys flat-faced and about half our height but still more like us than the Roswell grey cliché.
Jalnor, 8th Jun 2021 On 1x01: Will Any Escape Do?
Reply

Hi! Yeah, pretty much. More of a "planet exit," as in exiting the planet, but close enough :-) The story was partially spawned by my depression over the recent electoral victories of Trump and brexit at the time LOL
RJDG14, 8th Jun 2021 On 1x01: Will Any Escape Do?
Reply

Based on the comic name, and the avatar (as there is a path coming from where the UK is on Earth), is your comic's name a pun on Brexit? Brexit meant British-exit, whereas Plexit I suspect could mean PeopLe-exit (as in the Earth).
Jalnor, 19th Apr 2021 On Extra: Great again

This was just me being silly... partly poking at Trump fans and partly illustrating the actual size of the Krelax ;-)

A random person on Earth despairs at society's direction, moments before an alien ship recruits him for a mission...