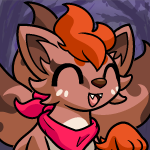 Hi! I'm Rokko and I'm a huge fan of the Pokémon Mystery Dungeon games! This is a compilation of Comics and Art from my PMD sideblog: https://rokkosmysterydungeon.tumblr.com/

Once again we run into a piece of the "monomyth" of PMD, the part where there is a character who tricks and betrays you.

In my headcanon, the events of the games all take place close enough to each other that all of my hero characters (except my ancient past hero) are able to meet, and indeed do as part of my version of Super's postgame. And of course that comes with sharing their experiences, especially the similar ones, including the betrayals.

Today's vignette has the main focus be about Madoka, and her feelings about the pokémon who betrayed her. In PSMD, this is the nuzleaf who takes you in (as part of a ruse). For my canon, I named him Mr. Tachibana. I named him after Kamen Rider's Tobei Tachibana, a genuinely helpful father figure from that series, early on during my playing, because well, I entirely fell for the ruse, ha ha. After his betrayal-reveal, I realized that funnily enough, that makes him more like the character who goes by the codename Tachibana in Kamen Rider Fourze. So yeah, it actually turned out to still be somewhat fitting.

Name tangent aside, so something I notice a lot of in the PMD fandom is that a lot of fans forgive and still like Nuzleaf after all is said and done. This is likely because for most people, the explanation that Dark Matter took root using the darkness in his heart is supposed to imply he was totally mind-controlled, and thus absolves him entirely. But I never entirely bought it, since he guy says himself Dark Matter needed /something/ to start with in order to even get a hold on him. (IIRC, the game keeps the details on how his connection to Dark Matter worked, my internet is being shitty and I'm not in the mood to wrestle with it & combing through a YouTube longplay to find the quotes to make sure).

Anyway, point of the matter is, I personally do not forgive or like him (yes, I know this is silly regarding fictional characters, but again, I really imagine my PMD-selves are literally me there). His storyline hit a particularly poignant spot for me (adults, especially parents/parental figures, telling me they were looking out for me but they really, really weren't). Over the years, when thinking about PMD, Super in particular, I go back to "what does it mean that I still don't forgive this guy? assuming everyone is correct that he was 110% mind-controlled and apparently not culpable whatsoever?"

And that's what I intended to explore using this vignette. I've learned from my IRL partner & other friends about the subject of forgiveness, which was key in the conclusions made in the writing. My main takeaway is that that forgiveness is not something you owe to people. The circumstances/state of mind someone hurt you in do not change the fact you were hurt. And forgiveness can only help you if you have reasons other than feeling obligated, to give it. It's supposed to be a tool to help you, as a victim, and not something the harmer 'earns' through explanation or even the attempts to make good afterwards. (Granted, the harmer IMO /should/ try to make good without the expectation of earning forgiveness, unless told to just stay away altogether, than they should do that instead.)

An interesting thing, at least, I think so anyway, about this vignette is how Cia and Daniel have different choices on forgiving Nada (who became the evil Dusknoir from the Explorers game in an erased future timeline). While I haven't gone much into their respective partners yet in this series, this does have to do with the personality differences I headcanoned the two's partners. So there's an element of "even if you're starting with the same person, me, the friends you have can greatly affect your approach to forgiveness."

Going back to Mr. Tachibana, the fact he retains the "wanting to make things right" from the official canon does mean, at least or my, and thus, my self-inserts' decisions behind forgive-or-not, that I am inclined to at least try to find a conclusion other than just "fuck him". (In my post-game rewrite, I removed the convoluted plan he did as part of it AND HONESTLY that canon plan was all sorts of "NO" imo, like, this plan to make amends relies on lying and tricking you AGAIN which is ??????? ... part of why I rewrote the postgame entirely for my canon.) Even with removing that asinine plan for the purposes of my canon, it still felt like at the end of the day, as far as myself personally goes, yeah, I still cannot.

Granted, I didn't show Madoka committing to that in this vignette (mainly because was running out of space in my 3-page limit, and decided as a publically-shared vignette, it would be better writing to not specify in order to strengthen the takeaway of "it's up to you, no one can impose a right answer on whether you forgive someone or not".

Thank you! I am happy to hear that the connection made sense to more than just me!
Mrjacob77, 2 days ago On Day 13: Villain
Reply
I never got to play Rescue Team, on account of no money then and still not enough money now, and as such my knowledge of the first game is almost entirely secondhand. Despite that, I still know enough to say that you nailed the characterization here, and the connection between Gengar and Munna is absolutely genius!!! I swear, as soon as I finish Origami King I'm getting Rescue DX!
kitsune-rokko, 2 days ago On Day 13: Villain

Somewhat fortunately for me, when I was planning out the basic premise of each vignette, I followed up a story that had too much of me to one without any version of me at all.

It was a welcome relief.

So I saw the opportunity with this vignette to finally explain a headcanon I had about Rescue Team's Gengar & Gates to Infinity's Munna I'd thought of while playing Super back in 2015.

(Spoilers talk ahoy after the cut)

In several ways, the 3DS Mystery Dungeon games echo & play on the DS ones. One of these ways is that Gengar of Rescue Team (first of the DS games, also on GBA) and Munna of Gates to Infinity (first of the 3DS games) have similar goals. They want you, the player, the hero, basically killed. And they'll resort to lies and trickery to make it happen.

I'd first thought about their similarity when, in both of their Connection Orb missions in Super, you have to deliver a letter from them to another pokémon. In both cases, it's evident both are working on being better people (even if Munna is more upfront about this while Gengar's more he found a friend who likes mutual ribbing on each other).

This got me thinking about a headcanon in which both of them knew each other before the events of each's respective game. Gengar always gave me the impression that he wasn't in the Pokémon Square area for very long, which my headcanon thought up as a "free space" gap for wherever he must've "spawned in" before winding up in the area. And for Munna, she doesn't go into detail about why she thought the world was a lost cause or how she joined Kyurem's 'pummeling the shit out of humans until they're literally ejected from the world' gang. You better believe this too, was "free space".

With both of these characters having Free Space in their backstories as far as I was concerned, and now with the idea of connection between the two in mind, 2015 me had thought of that Gengar and Munna knew each other when Gengar, who I've named Truman in my universe, was a gastly. Truman eventually betrays Dal (the name I decided on for Munna) & leaves her, crushing Dal's hope and thus starting her motivation and career as a human destroyer.

I felt it fit well because this headcanon is in keeping with Truman's "was a selfish Pokémon Trainer who sold his pokémon partner down the river", and so during the betrayal, he talks in a way that rubs in the "I never cared about you, you were just useful to me but no longer are."

As for why Truman's the main character of this vignette... it's basically because Gengar wears the "I'm bad!" on his sleeve since the beginning of Rescue Team while Munna being malicious is a mid-game twist in Gates. Gengar, and thus, Truman, is the more obvious villain.

Also, because Truman is the instigator, he is thus the one who during this vignette is /already/ a villain, which is the prompt word. Dal is interesting to me here because she's not a villain for the majority of the vignette. It's only in her very last paragaph that she starts making the decisions that will lead her to her later, villainous, actions.

Writing this one was certainly an... interesting experience.

So something that can happen when it comes to self-insert characters is the very real possibility you think of what feels like an incredibly clever way to connect the dots between real memories and experiences of yours to circumstances the character faces.

In this case, it was the fact that Dork is a tepig, connecting to a memory and formed connotation I have with the animals, wild boars.

And when writing the first draft of this vignette, I triggered myself, hard.

The original draft of the story actually depicted the overheard conversation, and it took me a bit to realize the emotion welling up was indeed a horrible emotion, and not the "wow I must be writing really good today if it's making me feel sad!" I had been mistaking it for.

But yeah, it is ultimately a symptom of the fact that for PMD, I am kind of incredibly literal about considering the player character "me". (I suppose a quirk of tending to be literal-minded in general?) And for my own canon does entail that the trauma that's part of me sticks onto them too. Even with the amnesia, but because Dork doesn't have amnesia (a trait directly from the fact that the Gates to Infinity hero does not have it), she can actually remember the root causes when something prompts the memory.

And that's kind of how this happened, that the Winds of Despair the Bittercold can make striking me as something that would prompt it.

In any case, I have revised this vignette considerably to where it doesn't feel as bad as it did for me. And I also have learned a considerable lesson about the difference between "it's canon that these characters, being literally me, had that stuff happen" and "actually writing about what happened, digging up a traumatic memory to do so, and the emotional/mental consequence thereof. There's a reason that's usually kept buried."

I am happy that doing the Illustration for this one was a much happier experience. It went a lot faster and smoother than I was honestly expecting. 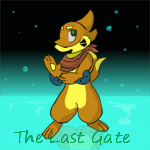 i wake up in the cosmos: Pokémon Cosmic Mystery Dungeon 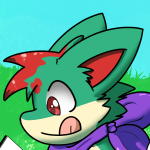 The Power of Pouvoir 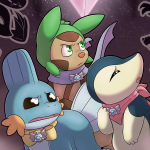 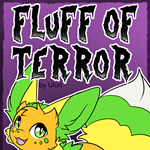 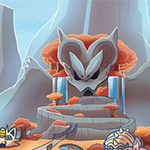 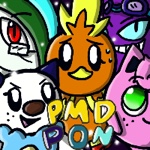 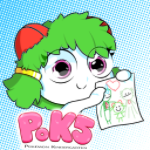 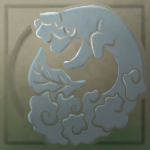