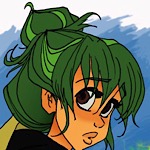 Just a place to cram the pieces of art I’ve received from my friends, family, readers, and from art trades and commissions.

ShaRose49
Sharon Kadach is a digital artist and webcomic creator who is heavily influenced by animation and comics. Her use of bright colours and clean cel-shading reflect her fun and straightforward art style.
Sharon grew up in a large family and has lived most of her life in the countryside, which was pretty quiet and gave her lots of room to think. Shortly after she turned 16, She drew a picture of a ninja girl named Katana Markus who had a yellowish complexion and a blue uniform. The rest is I guess, history.


Most recent comments left on Sunstrike and Bluemist Art

Heyyy! I’m so sorry I left these waiting to be posted for so long. Now, without further adieu...

The badass Dragon-Ball-esque fanart is from Kevtrev! he makes the awesome webcomic Sean and Bailey, which also features a best-friend super-powered duo <3 He drew the lineart, and I couldn’t resist colouring it (not because I don’t like B/W art..but because I LOVE colouring)!!

There’s a bit of a story behind the adorable drawing of Evan and Keiyo from Road to Kerridon drinking tea! This was drawn for me by the Accidental Ninja, the creator of RtK, who was helping me with some errors in the occasional Japanese dialogue in the comic’s early pages. Eventually, I coloured the fanart on a whim and sent it back to Ninja as a thank you, which really is not much compared to all her help and support, but I hope she knows how grateful I am nonetheless!

The News-Watching Party group fanart was drawn by KatsuTG, and I am honoured that Kat got to be a part of it, plus everything here looks so adorable and I love the effect of fully rendered drawings hanging out on a flat sketch backdrop. <3

This terrifying and yet gorgeous piece based on the new character Xan, was drawn by none other than Sovember! I’m really excited to see what people think as this new character makes his first impression.

The painting-esque drawing of Kat was beautifully rendered and completely drawn by The Doodler! Your username is pretty misleading, dang that’s some powerful lighting!

The other painting of Kat in a stealth suit with short hair, was done by my now 16-year-old sister <333

Last but not least! A sweet sketch of Kat in her usual clothes by Zero Hour!

Jeremy7 does it again, only this time he shows us what Kairo and Evan would look like! Here’s the fascinating context he gave me:

Kairo is one of the officials of New France's police force, who doesn't see as much action as he used to - hence the outfit. That said, he's taken Kat and Evan under his wing, so that one day, they will aide in keeping New France safe from the supernatural.

Evan, ashamed of his "freaky" nature (the 1800's were a rough time), wears a robe and blindfold to keep to himself. Personally, he hates fighting, and usually just puts the bodies of slain monsters to rest. But don't let his quiet nature fool you, if you get on his bad side, he will use that shovel to teach you five new meanings of pain, regardless of whether you're a human or a monster. Also, his blindfold suppresses his powers - with it off, he can see ALL.

Man, I gotta try drawing this AU myself sometime!
Profile

Zero Hour made the colours really pop here!! I love how his hair has purple in it <3 Profile