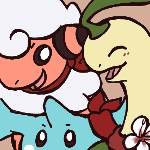 When Chloe the Chikorita and Myra the Mareep join the rescuers guild, they don't yet know what adventures, challenges and new friends await them! Originally started for a DeviantArt roleplay group called PMD-Explorers (Pokemon Mystery Dungeon). The story follows mission prompts from that group, starting from Mission 3. Events take place between missions and are usually illustrated written stories. After Mission 8, the comic continues as an independent storyline.

ShrubSparrow
Long-time Pokemon fan, making comics inspired by both shonen (for cool battles) and shojo (for emotional drama) manga. You can also find me on Twitter, Tumblr and DeviantArt with the same name!

If you're thinking "but Bayleef can't learn Camouflage", this is where I used the Magic Paint I earned in the group! It allowed me to teach whatever move to one of my Pokemon.
Left on Mission 9: Page 7

We're finally getting to some more recent stuff in the story! The comic is currently on hiatus until March, so I'll schedule a steady pace of updates (about two pages per day) until then.
Left on Mission 9

Summary: The team visit the Rogues' headquarters to ask Gunpowder for help. They want to know if he has any treasure maps, since finding one could solve the guild's money problems. Gunpowder has one map to a place where he apparently couldn't visit before, since he's a Dragon type. Myra and Chloe apologize for the whole mess of Mission 3, but Gunpowder says they're even.

I have to admit, most of this part is not essential for the story, I just liked Gunpowder and Devonshire a lot and since this was likely the last time they appear in the story, I wanted to dwell on them a little more. Devonshire being a Marowak in his previous life (and turning into one for Event 8) was part of the group's story, and I just really wanted to draw him once like that.
Left on Event 8 Part 2: I really owe you one

Summary: Everyone has managed to return from the past safely with Jasmine. However, it seems that they went through very hard times while in the past, and some Pokemon changed a lot. Mike has evolved, but also has become very aggressive and treats Chill very badly. Chill has no choice but to take the responsibilities of running the Rescuers all alone. To make things harder, the group has been managed badly since they were gone and they are deep in debt. Myra vows to help Chill out with his problems.

Mike's dialogue here isn't written by me, it's based on a script that Glitchedpuppet released when the group closed.
Left on Event 8 Part 1: GET OUT