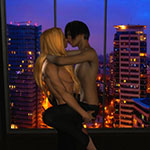 A fan fiction Yaoi <boy love> Manga based on Bronze by Minami Ozaki. It has been a year since Shibuya Katsumi found the bodies of his best friend Nanjo Koji and his lover Izumi Takuto dead in a Hotel bed from suicide. He has grieved over them only to find out everything he
thought he saw wasn't true. Koji and Izumi lives. With plastic surgery and new identities. Koji now Ren Abunai is not only the number 1 Rock Star in the world but, he has even surpassed himself <koji> and is called "The Prince Of Japan". Izumi was once headed towards stardom as a Soccer player until, Koji's brother ran over him crushing his dreams of ever playing again. Even though Izumi now known as Sai Yoshito can walk and, play again as he once could, he has no desire to ever play Soccer again. Instead he is a Bar Owner and has trained to be able to protect himself and, his very important person. Join me for there new world!! Mature Content and Fantasy!!! Hope you enjoy it :-) Updates every Saturday!!There are also several video's I have made I will post those as well.
Fantasy Erotica Fan Fiction BL