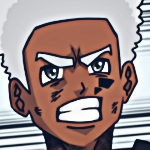 To some he's a murderer, others think he's the Saviour.
Some people think he should be put to death. But there are stilt those who would protect him with their lives.
Warrior's Wings is the tale of Dike Sinora, a young outcast who became the most wanted man in the Raz Empire after murdering the Royal Prince of Obodo. It presents a whole new picture of ancient African warfare, the scheming, the fighting and the conquest.
If you're a fan of epic war stories, look no further. It is a juicy pack of action, adventure, gore and romance.

Now that word's out about the Sinoras, it seems everyone wants a piece of the pie!
Left on Chapter 4 prologue III

Oohh it's getting intense! I can feel all these entities coming to instigate a giant event soon D=

Great page man! Great design and details with all the people and scenery
Left on Chapter 4 prologue III

Thanks! It promises to be epic!!
Left on Chapter 4 Cover