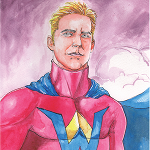 He has the power and he feels the responsibility. He also knows you're reading his adventures. But there's just one question: will he ever get the cute guys?

That's interesting, for certain. Nifty synchronicity that this page makes him look like an actor who would actually play a superhero character (I'm hesitant to say just a superhero--what I know of the Boys is that the superheroes kind of aren't that "hero" part).
apool, 29th Jan 2020 On Issue 1: The Debut - Cover
Reply

I haven't watched the Boys, and have no desire to read the comic, so I don't have any knowledge of that character. Wonder Super looks like that character, then?
apool, 28th Jan 2020 On Issue 1: The Debut - Cover
Reply

This is the last page of the issue. What did you think of it? Let me know in the comments below.

Who are these two? If you've read Karabear Comics Presents, you would know, but I shouldn't leave it at that, as I shouldn't expect everyone to have done so. These are Alpin Aneat (the guy with the beard) and Agent Z946 (the woman in blue with the red highlights on the costume). Alpin is the xenophobic, paranoid leader of his own cult, while Z946 is his second-in-command. Consider them essentially my Lex Luthor and Mercy Graves of this universe: powerful, influential villains whose mission it is to undermine and destroy superheroes. Just throw in a whole heaping of racism, homophobia, and the like, too. They're not good people.

But Wonder Super will pop up again--in Defenders of America #2, and there's also a certain team of protectors the Defenders are going to cross over with in a few months...