halibabica:It does a good job of combining its genres, and I don’t have too many gripes. Let’s go over what I picked up on...


halibabica:However, I need to mention that the hands could use some work. They tend to look wide and stiff, more like flippers than anything else. I can’t say it’s a style choice when everything else is close enough to realism, so I couldn’t let it slide. Character expressions are also occasionally bland. Some of the dialogue comes across as being stated neutrally, which might be intentional, but having a lack of emotion behind it makes it less engaging. I mean, there are plenty of times when emotions are shown, but they don’t feel quite as impactful. I can appreciate the subtlety, but a little facial exaggeration might be helpful.

Yeah, those areas have long been a thorn in my side. It is helpful, however to get an outside perspective on that.


halibabica:Anyway, the comic is fully colored. There are no B&W pages to be found anywhere within, which is definitely a plus. Special effects are made good use of, and are typically easy to understand. There weren’t any moments where I was too confused about what I was looking at. The story is even somewhat courteous about it. For example, at one point an agent is pursuing a man who creates a magic barrier around himself. The reader would have no frame of reference for what this means, but the agent contacts his colleagues to tell them the barrier is up and not to use ballistics. Now, I obviously wouldn’t know the specifics about it, but from a storytelling standpoint, I have all I need to know: he has a barrier and they can’t just shoot him. Lighting and shading are put to solid use. The pages flow well, and the comic has no presentation issues I could detect. Well done.

I'm glad those things come across. I'm always worried about the fx, even if I do consider them one of my strong points artistically speaking.


halibabica:The story, I had a slightly difficult time following. It’s readable and understandable, but it jumps around a lot and there are many characters involved at any given time. It starts out following a trio of high school students who go into an old subway looking for secrets, where they meet a hobo who’s a lot more significant than he seems, and they get abducted by someone else down there. It turned out the three of them were side characters and it was up to our real protagonists to get to the bottom of it. The tale mostly focuses on the efforts of Mercy Black, a no-nonsense hardboiled woman who takes her work seriously (as she should). She’s a fairly typical snarky detective type and we don’t get to know much about her personally, but she’s effective for the kind of story this is. The rest of the cast mostly consists of her various contacts that range from government agents to gang members with unique connections. I’ve admitted before that I’m terrible with names, and hers is the only one I can remember. I won’t say that’s the author’s fault; it’s a known issue for me, but the cast is fairly large and can be tough to keep track of.

This is partially due to the story’s progression. As before, it moves around a lot. I feel as though this kind of story direction is more suited to movies where scenes can be established quickly and the dialogue can just carry right along. In a strictly visual medium like this, it makes it hard to pick up on what exactly is going on when the transitions occur. Knowing where you are, how you got there, and who’s talking can be very confusing on an initial pass. There’s virtually no fluff to be had, but the pace feels dogged as the story marches forward and expects you to keep up. It could really afford to slow down sometimes. While it’s good to keep things moving and interesting, more of a balance would be welcome.

Interesting. I had always thought we were perhaps moving too slowly. And yeah, we could probably use a bit more focus at any given time on the characters present. Food for thought...


halibabica:It can also be difficult to tell who exactly is meant to be the focus of the story. Since it follows multiple perspectives, you’d think the biggest chunk of it would belong to the main character (Mercy, usually). However, the duration of each arc can make this complicated, like with the teenagers I mentioned earlier. The 2nd act starts in a similar way, this time with a news reporter who’s looking into the case being investigated, and whose perspective I’m pretty sure we haven’t revisited since. If we did, I’d already forgotten who she was by the time she showed up again.

The use of characters other than the focus characters for the Season for the prologues is kind of an experiment. Maybe we need to keep this in mind going forward...


halibabica:While these issues are irksome to me, I’d say they’re relatively minor. I was still able to, read, enjoy, and understand the series and its events. You don’t need to keep track of every little thing for it to be entertaining. Autumn Bay is a comic that knows what it wants to be, and it does exactly that. This leaves some things to be desired, but it’s effective at its purpose and shouldn’t disappoint.

Will Mercy’s investigation lead her into my sig?

I'm glad that, despite its faults, our little comic still entertains. Hopefully (once we get back to production, we can iron out some things.

Commissions | Twitter | Tumblr
Result in thread: Post the image of your newest page!
24th May 2019, 6:19 AM #2
ProfEtheric
Dry Concrete 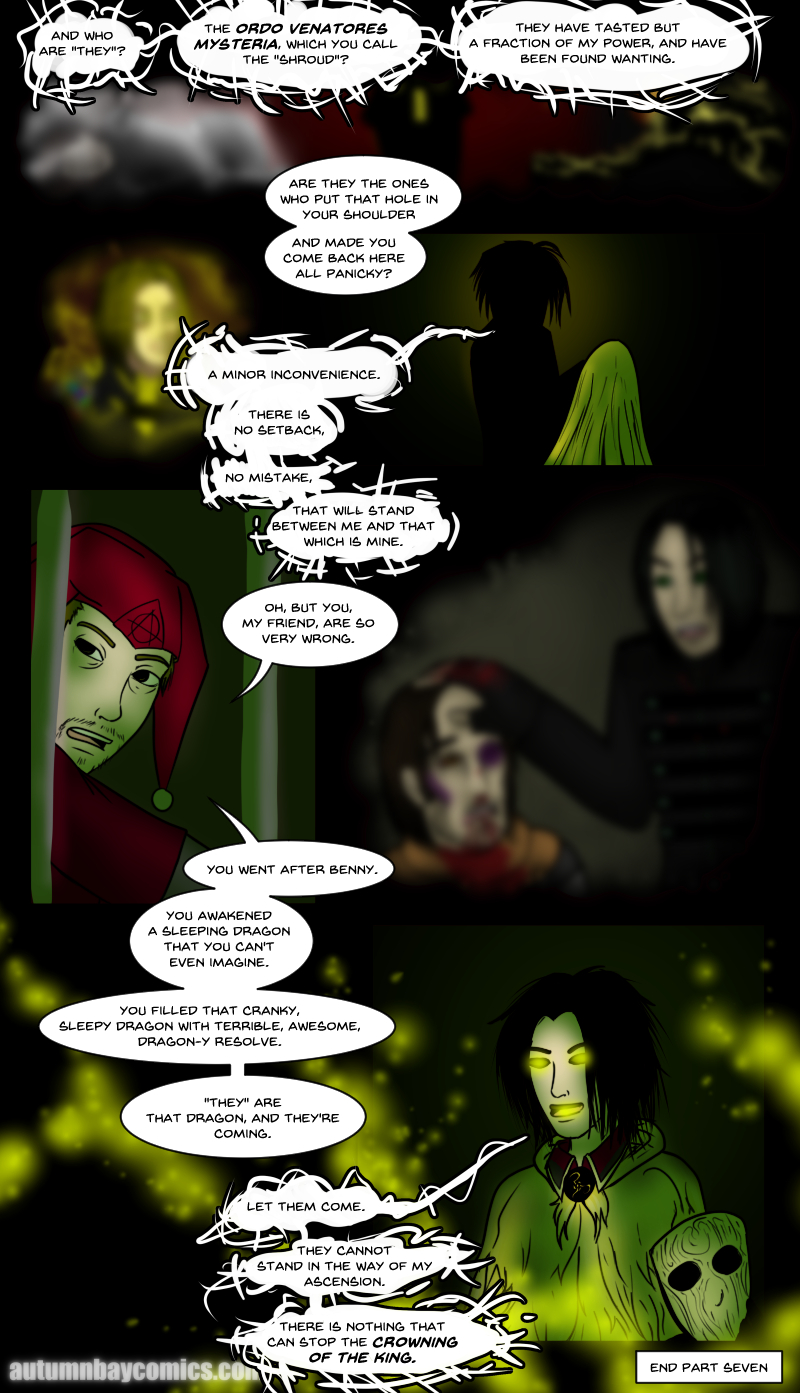 Commissions | Twitter | Tumblr
Result in thread: Tell us about your newest page! Comment on the one above first!
22nd May 2019, 3:30 AM #4
ProfEtheric
Dry Concrete

Commissions | Twitter | Tumblr
Result in thread: 30 Days of Questions About Your Comic's Setting
21st May 2019, 6:47 AM #6
ProfEtheric
Dry Concrete

Posts: 3450
Registration date: 17th Aug 2014
29) Does your setting have any visual symbols or emblems associated with it (for instance, something that would be printed on a flag)? Post pictures if you've got any!

Well, we haven't shown any official symbols, but there is one fairly universal indicator that one is in Autumn Bay: Chapel Tower (shown in the very first panel of the comic).

There are other recurring symbols.

Commissions | Twitter | Tumblr
Result in thread: Post the image of your newest page!
20th May 2019, 6:55 AM #7
ProfEtheric
Dry Concrete 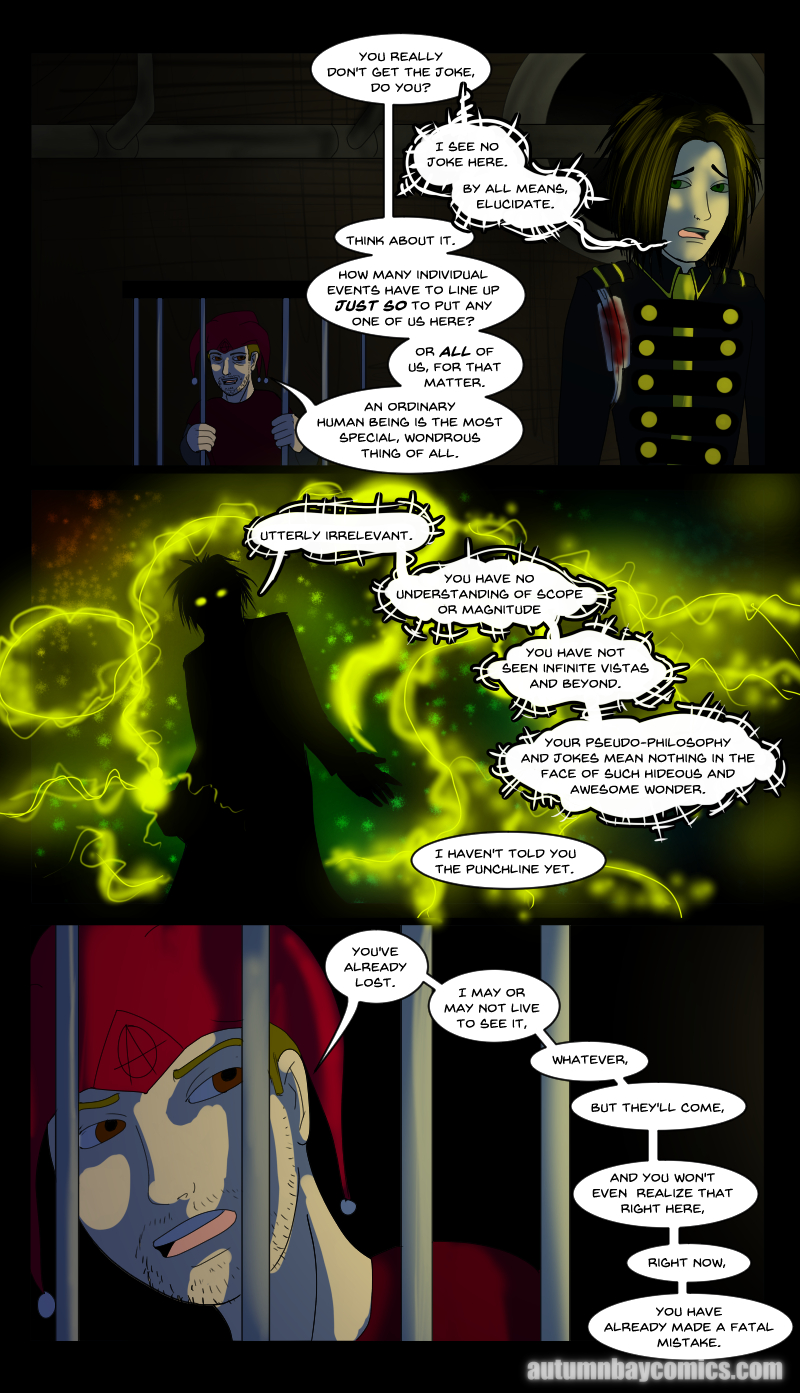 Commissions | Twitter | Tumblr
Result in thread: 30 Days of Questions About Your Comic's Setting
20th May 2019, 6:53 AM #8
ProfEtheric
Dry Concrete

Posts: 3450
Registration date: 17th Aug 2014
28) How well-maintained and stable is the infrastructure (buildings, roads, power supplies, etc.) of your setting?


For as many abandoned warehouses and forgotten constructions as there are in Autumn Bay, the infrastructure is well taken care of, for the most part. A couple of neighborhoods have fallen into a bit of disrepair (namely Mason Hills and Farrell's Row).
_______________________

Commissions | Twitter | Tumblr
Result in thread: 30 Days of Questions About Your Comic's Setting
19th May 2019, 6:49 AM #9
ProfEtheric
Dry Concrete

Posts: 3450
Registration date: 17th Aug 2014
27) How much is hospitality valued in your setting? Are people welcoming to strangers?

People in Autumn Bay tend to be very welcoming, sometimes to a fault. The going sentiment seems to be that everyone has a story, and save for a twist of fate, anyone could be in anyone else's situation.
_______________________

Autumn Bay is a typical American city. Many people are fond of their car. There is also a large number of people taking the subway and the bus.

Commissions | Twitter | Tumblr
Result in thread: Tell us about your newest page! Comment on the one above first!
17th May 2019, 8:28 PM #12
ProfEtheric
Dry Concrete

Yeah, that could get awkward. Nicely done! :D

Commissions | Twitter | Tumblr
Result in thread: 30 Days of Questions About Your Comic's Setting
17th May 2019, 7:10 AM #13
ProfEtheric
Dry Concrete

Autumn Bay is a typical American city in this regard. Highly desirable jobs involve doing what you love, high pay, and/or low stress, and if at all possible, being your own boss. The local business owners (whether those businesses are the local bookstore or a multinational corporation) seem to enjoy their work. 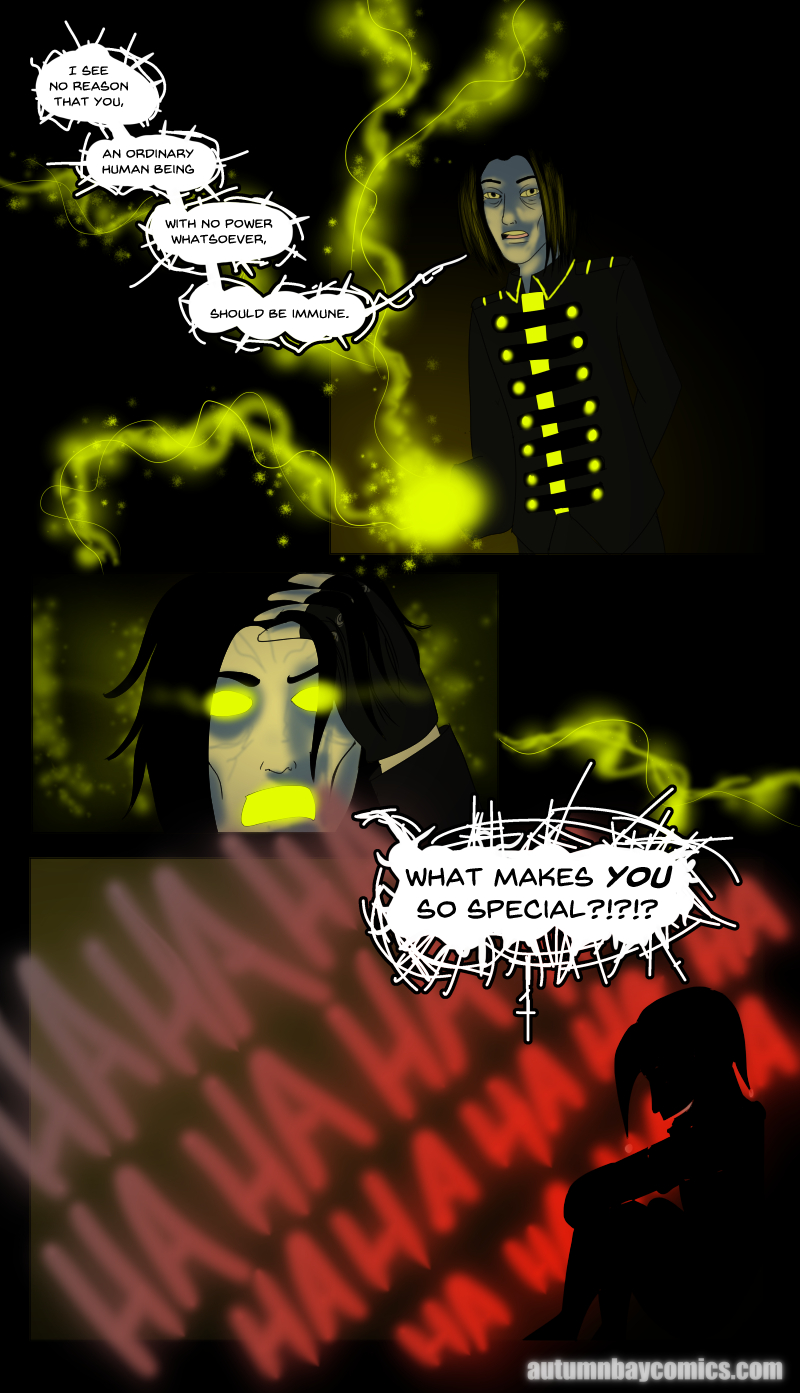 Commissions | Twitter | Tumblr
Result in thread: 30 Days of Questions About Your Comic's Setting
16th May 2019, 6:35 AM #15
ProfEtheric
Dry Concrete

Posts: 3450
Registration date: 17th Aug 2014
24) Does your setting have a reputation (for better or for worse)? How well-known is it outside of its borders?


Most people have never even heard of Autumn Bay. It's not that you can't find it on a map. You can, very easily. It even has an international airport.

That being said, the city does have a reputation in certain circles. Namely, circles concerned with the occult, the esoteric, and conspiracies. Whether the reputation (as being the most magical, or weirdest, or most dangerous, or all three, city in the world) is good or bad really depends on your stance on such things.
_______________________

Posts: 3450
Registration date: 17th Aug 2014
23) How is death treated in your setting? Are there any unique traditions or customs surrounding death?

Death is treated much the same in Autumn Bay as in the rest of the world.

Commissions | Twitter | Tumblr
Result in thread: Tell us about your newest page! Comment on the one above first!
14th May 2019, 7:40 PM #18
ProfEtheric
Dry Concrete

I mean, she really doesn't want to go, so they shouldn't force her...

Posts: 3450
Registration date: 17th Aug 2014
22) Is the life expectancy in your setting different from the real-world average (currently 71.5 years globally)? What is the likeliest cause of death? What do people perceive as the biggest threat to their existence?

Well, Autumn Bay is, at its heart, an average American city, so life expectancy is around 78.6 years, with heart disease being the biggest killer.

People, in general, think that terrorism and/or climate change are the biggest threats to their existence. 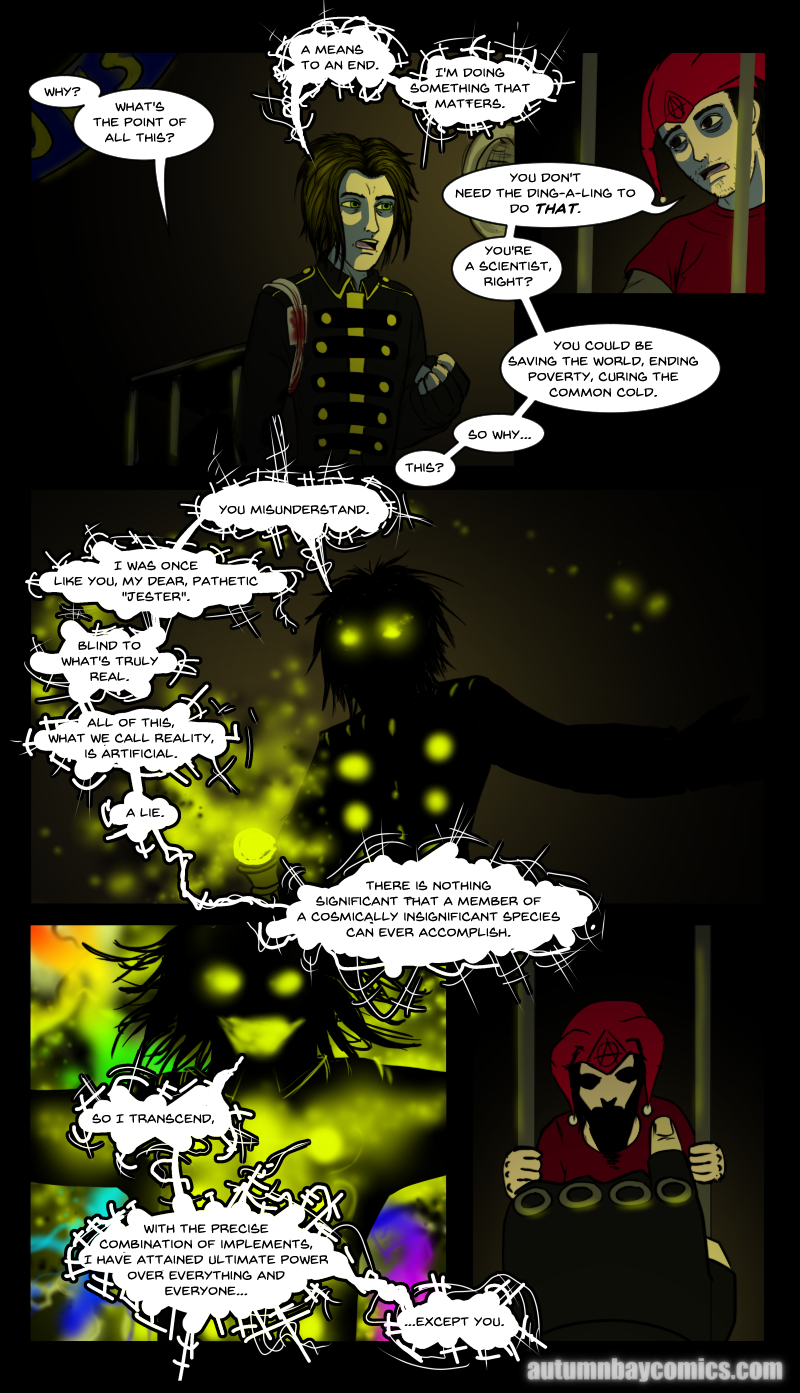