Posts: 76
Registration date: 28th Dec 2019
Location: lost in the sauce
Today I finished the art for a page! Still gotta finalize the text and put that in, but glad to be done with painting backgrounds for a bit lol.

Posts: 76
Registration date: 28th Dec 2019
Location: lost in the sauce
Bwahahaha, don’t underestimate the power of a well thought out review, I suppose! It is, perhaps, addictive... xD

But thank you! This is a very helpful direction, I’m glad to hear the later chapters are fitting together a bit better! My earlier bits are definitely... a beginners attempt, I guess? I fight with myself sometimes about restructuring the whole first chapter but I don’t want to fall into the trap of constantly redoing old pages lol. So yes! I’m glad I’m getting a better hang of the learning curve of all this :)

I will look into the website formatting as well! The contrast could definitely be bumped a bit, you’re right on that haha

Result in thread: Post your works in progress
6 days ago, 7:28 AM #3
ithidunes

But omg MediBang twins! Yessss! :D I recently switched over from firealpaca now that I’ve got a better tablet, and I love it soooo much. The little reference window is a lifesaver lol
_______________________

Result in thread: Post your works in progress
One week ago, 8:05 PM #4
ithidunes

Posts: 76
Registration date: 28th Dec 2019
Location: lost in the sauce
Backgrounds.... backgrounds...... each day I curse myself for deciding to just straight up paint everything lol 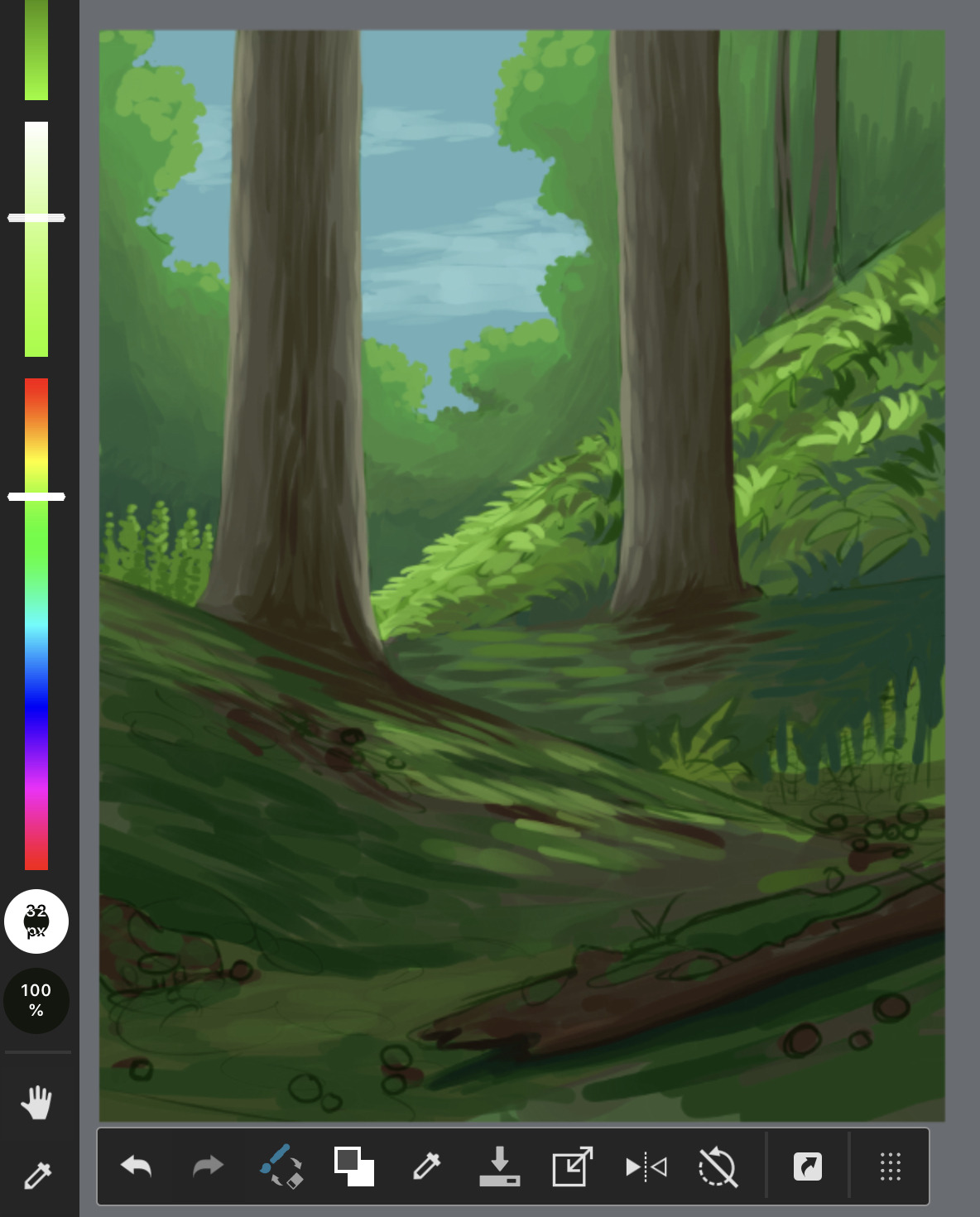 Posts: 76
Registration date: 28th Dec 2019
Location: lost in the sauce
If you are not too busy, I would love to hear what could be improved on for my pet project <3

Result in thread: Key moments in your growth as an artist/writer
9 days ago, 7:56 PM #6
ithidunes

Posts: 76
Registration date: 28th Dec 2019
Location: lost in the sauce
I think one of my more memorable breakthroughs came about a year after I started working digitally? I was in high school and had been working a lot with charcoal in class, really trying to grasp the “there’s no such thing as lines” concept. This sounded awesome, because I really struggled with line art in general, but I didn’t really grasp it, until one day I realized that if I painted things in “enough” I could just ditch the lines all together lmao. 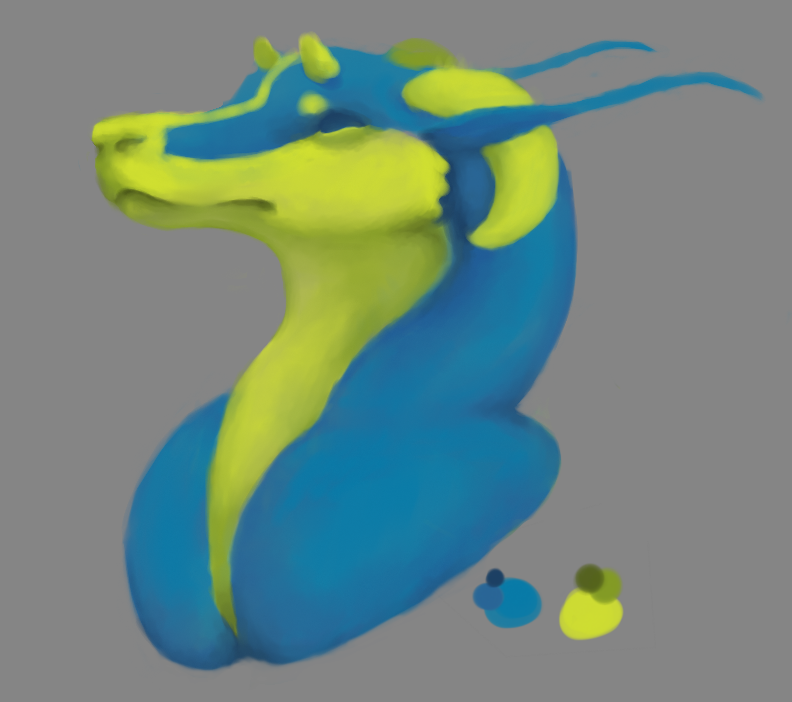 Posts: 76
Registration date: 28th Dec 2019
Location: lost in the sauce
(Technically yesterday but-) I started working on the first page of my next chapter~!

I’m pretty excited & proud of myself; I sat down to get through the sketch/lines and maybe block out colors? Because usually that’s about all I can get done in the 2~ish hours before work..... but I did all that and got through a good portion of the painting too!

Posts: 76
Registration date: 28th Dec 2019
Location: lost in the sauce
My day was so miserable, it’s almost hilarious in hindsight... like some kind of nightmare made for television montage ;~;

Working at a grocery store deli for the foobaw holiday weekend is hell.

Understaffed and closing with a bunch of under-trained new people- not their fault, but still terrible. Corporate trying to change our cooking schedule to disastrous effects... followed by store management trying to doctor the numbers for us, even though they know nothing about what kind of numbers we’d go through on a regular day. As a result I throw away an extra 400$ of perfectly good food for no reason, because full shelves look good I guess? (Mmm yeah, wastefulness! Nice!) Plus my manager had me do all this extra cooking for prep tomorrow and made me get sooo far behind all day... even though they have plenty of well trained, senior employees on hand to handle it in the morning :’(

Posts: 76
Registration date: 28th Dec 2019
Location: lost in the sauce
Got my chapter all drafted! *o*<3 It’s gonna be a short one, and I’d had a rough idea for the first 5 pages already done, but earlier I managed to get the rest figured out :) Just had to organize a page-by-page breakdown in writing and getting the panels was a lot easier.

I've got some beetles at the moment! It's not the best quality photo, but here's three of them enjoying some banana:

The species is Pachnoda marginata, for anyone wondering. They lovely little beetles, very gentle and have pretty markings on their elytra as well. I've got about six of these adult beetles at the moment, with some larvae as well, so hopefully I'll have many more adult beetles soon!

I also have some Triops, but they're too small (and fast) for me to be able to get a decent picture of.

Ohhhhhh they're so beautiful! <3 I've never heard of them before, but I love the markings ;w; I bet the larvae are pretty cute too, beetle babies have the sweetest little faces & legs hahah. Triops are really rad too, please post a pic when they get bigger :D I had some growing up and long to get another colony going someday.....

The only pet I have at the moment is a tiger salamander, named 2ude. He is a vicious beast who lets out a mighty roar when jumping at worms lol 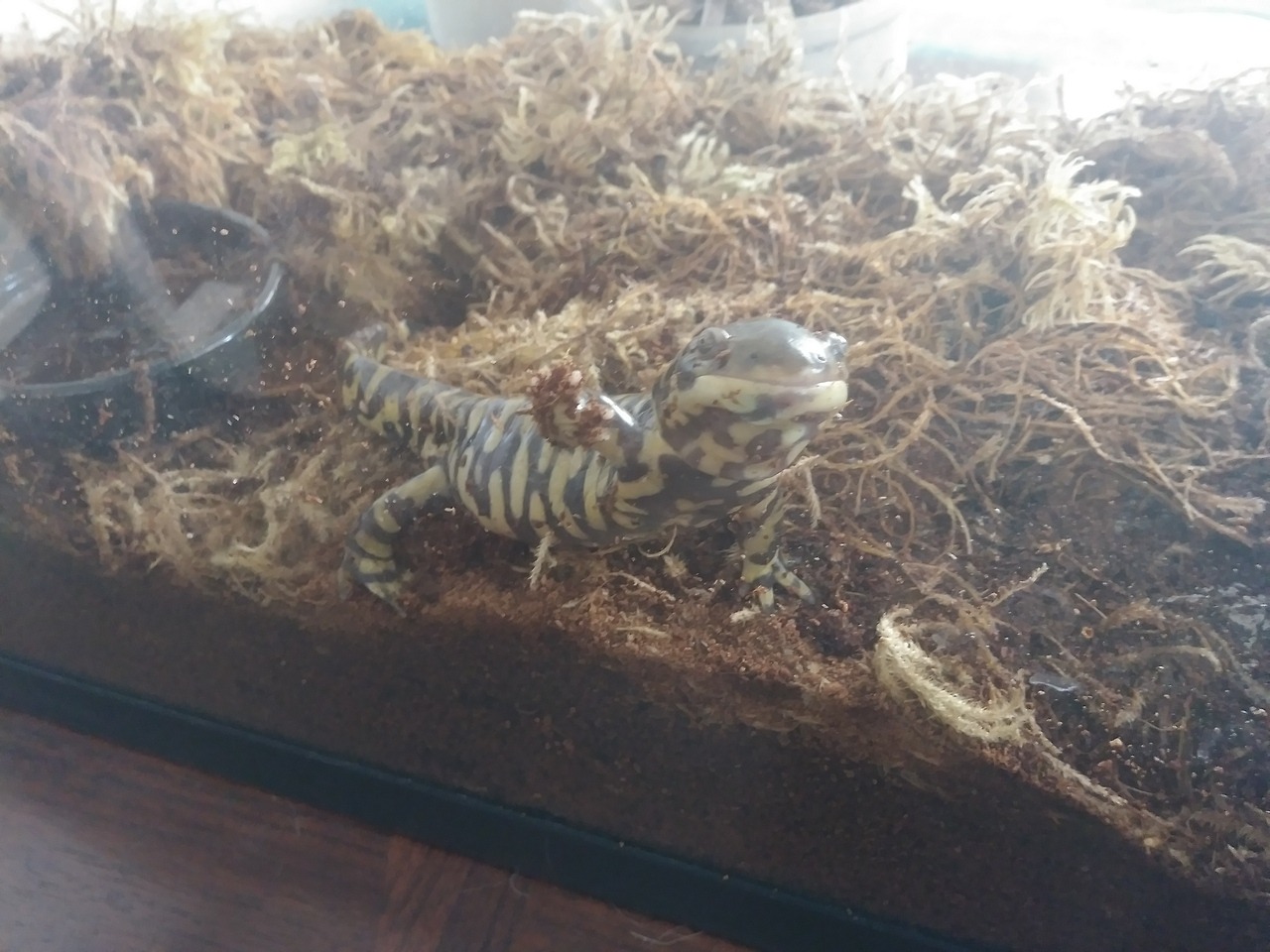 Posts: 76
Registration date: 28th Dec 2019
Location: lost in the sauce
Neat! I dig the vibes, and the translated lyrics (I had to look up...) make me curious about the show :O

Posts: 76
Registration date: 28th Dec 2019
Location: lost in the sauce
It might be a good time to really sit down with yourself and evaluate what you're trying to get out of the comic making process- like, early on, why did you think to yourself "wow, I wanna make a comic!". I have this conversation with myself all the time haha- I like making comics because I have a story I want to tell, and even if I don't get much engagement, I'm making my project for myself first. And comics are a BIG project haha

Can't recall who first penned it here, but I see a lot of discussion about how webcomics have it harder than other mediums, because the creator is doing the work of several different people. Big-name comic publishers have writers and artists and inkers and colorists and marketing teams and more- and we're just throwing it all together alone haha. Its understandable to get overwhelmed sometimes!


I'd definitely go with robotwin's suggestion to cut back on hours-per-page if that's a big pressure point. (20-30 hours per page does sound like A Lot) Maybe even update every other week for a bit, or take a short break if you need. When outside stress really gets me wound up, I notice that I have a harder time focusing on my art. (And lbr, these are very stressful times just in general lol.) Taking time to decompress and handle what we can for those issues can help the comic process more than we realize.

Posts: 76
Registration date: 28th Dec 2019
Location: lost in the sauce
Started doing some drafting today- I’ve been on break from comic work for the past week or two, and it’s been nice! But I am feeling more and more ready to get back in the saddle :)

I have more research to do before I can start actually writing out the “”essay”” for this next chapter, but getting the more obvious visuals figured out feels like a solid milestone. (It’s mostly the detail-type facts I gotta get solidified anyways - lbs per acre, dates & timeframes, etc)

Honestly I’ll probably work on some of the assets for this section out of order wrt the overall chapter. Ive been thinking about the things I know I’ll need this last week and it seems easy enough. Nothing too crazy- Drawing out some maps, maybe a few portraits, reproduce an Audobon plate. At the very least it will make the transition from not working on comic to working on comic a bit easier, I hope xD

Result in thread: How can websites move beyond advertising-based business models?
26th Jan 2021, 12:38 AM #16
ithidunes

Posts: 76
Registration date: 28th Dec 2019
Location: lost in the sauce
tbh I get the feeling that the money war between internet users and internet companies is gonna be the death of the web as we know it, lol, but I'm not blaming the average online person for escalating things by installing ad blockers.

Subscription-type service models could pretty easily cover the running costs of most sites- sort of a reddit pay-per-upvote model, for bonus content or whatever- if it weren't for the companies in charge shooting themselves in the foot. Don't get me wrong, I definitely agree that there's a subset of people who don't understand or care to cover the costs of producing the (artistic) content they consume... but if there's any greed running rampant a majority of it lies in the shareholders.

Spotify got mentioned as one of the increasingly ad-dominated domains, for example- but is notorious for underpaying the artists who's content they host. Youtube, too, has been going down the drain- there was even a thread on here talking about it a while back. Deviantart used to be a cool hub for artists, but wanted a cut of commission transactions and made that stupid points system- the beginning of the end for them. Netflix had a cool business model of streaming shows, until everyone and their mom wanted to start their own streaming company to make that bank. (Which kills why netflix beat out cable in the first place- every show for $10.99/mo- now if you want to see it all, you gotta subscribe to a billion services, paying just as much for cable TV if not more!) The news websites being behind paywalls, too- Etc, etc.


I think people, if given the chance, would do plenty of cool stuff for free (like wikipedia!)- and plenty of people (if not struggling with paying for necessities like housing or food) would help sustain each other, too. But until the dominant culture moves away from the "profit before all" model, I get the sense its gonna be a vicious cycle forever. Cause the internet won't change until the rest of the world does :P
_______________________

Posts: 76
Registration date: 28th Dec 2019
Location: lost in the sauce
I’m not so sure I’d call myself a fan of Audubon himself, but the ‘naturalist’ sort of art style he’s particularly noted for is really cool to look at. I love the lush backgrounds and attention to detail in a lot of the plates, even just aside from the birds themselves- it ends up reminding me of the sort of art that decorates the back walls of museum dioramas. A modern artist who I would be a fan of, Walton Ford, really takes the style and runs with it tho. He has a more surreal approach, and his paintings are really loaded with a lot of interesting symbolism (often referring to the destructive & colonial tendencies of his stylistic predecessor, which I think is interesting- nsfw warning for looking up his stuff tho lol) 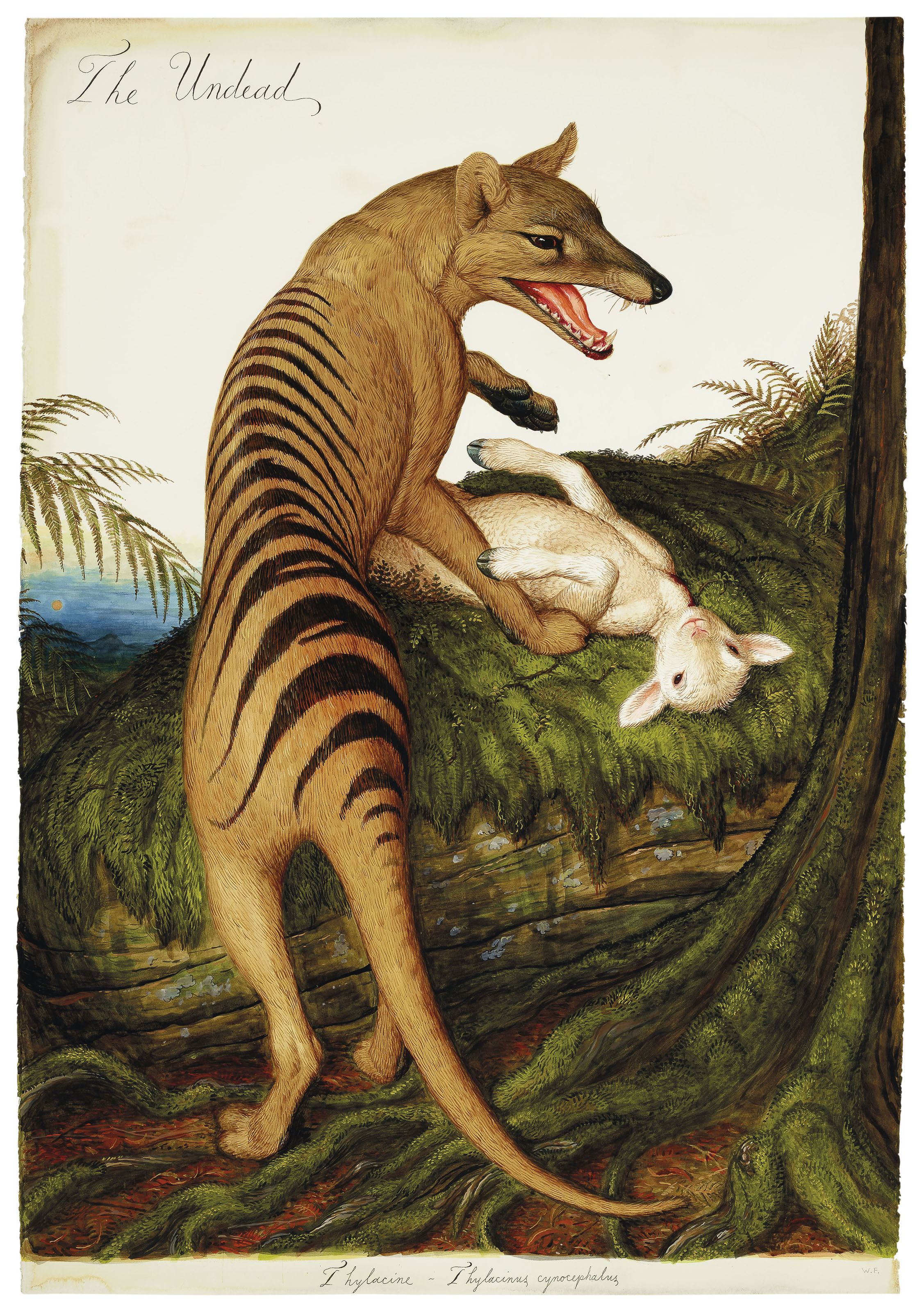 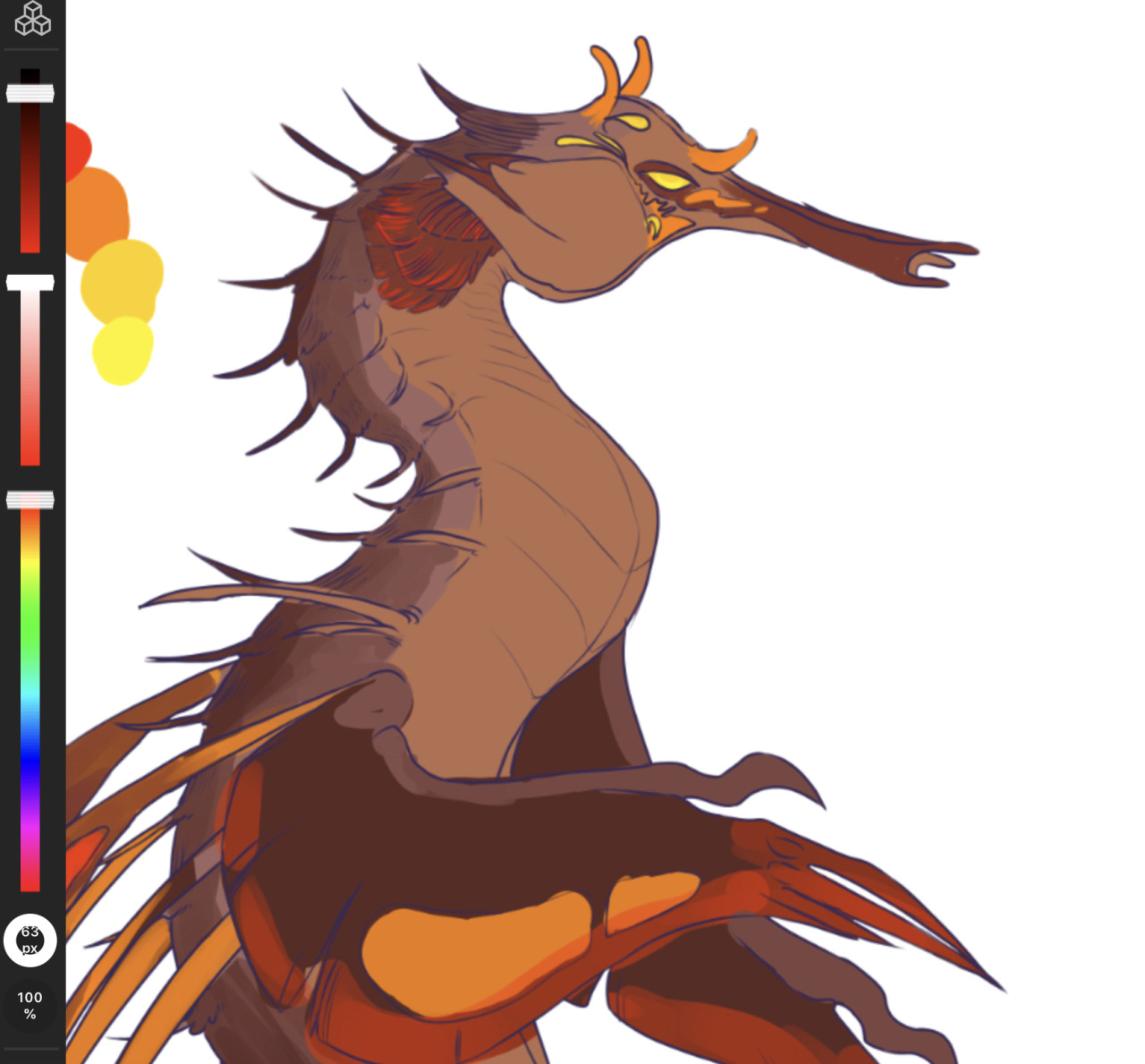 Posts: 76
Registration date: 28th Dec 2019
Location: lost in the sauce
More progress...! Got all the actual lines done for my page, and laid out all the proper coloring layers- I think it’s coming along really well!

Posts: 76
Registration date: 28th Dec 2019
Location: lost in the sauce
I got more solid sketch lines in! And started getting my character pose down! Both from the really rough color-sketch I made a while back..... deadline for the end of the chapter is creeping up like a week away, but making even a little progress is good, right...? ^^;