Posts: 1349
Registration date: 29th Apr 2015
There's Idol Paradise World, which is this light novel thingy I had on here. It was all right, I came up with some interesting characters and plot points, but the issue is... I had no idea what I wanted the tone to be. Is it a straight action-oriented parody of these idol harem tropes? Do the characters have to deal with heavy real-world issues due to being disabled and LGBTQ+? What's the game here?

Maybe someday I'll figure out what I want the story to be and rewrite it, but until then, it's shelved.

Interesting to learn this because as a reader I assumed you had it all figured out in some 4d chess scheme. Part of what I liked about it was the unpredictable tone. I hope you figure it out eventually even if that means picking one aspect and going 100% with it.
_______________________

Posts: 1349
Registration date: 29th Apr 2015
an old idea of mine: guy goes to harmons to buy bread. as he traverses the store, it becomes more and more labyrinthine. employees and other customers appear lost in thought, but the longer he's there, the more malicious their absentmindedness becomes. he doesn't care though he just wants the bread. once he gets to the bread aisle, harmons is actively trying to kill him.

i imagine the story taking itself seriously despite the grocery-themed puzzles and combat. we'd grow attached to this person who's willing to risk it all for a simple errand, something something society. but i don't think i'd be able to pull it off it'd get too goofy
_______________________

Posts: 1349
Registration date: 29th Apr 2015
you ever see some fresh lookin comp shingle and have to fight the urge to take a big bite out of the roof

Posts: 1349
Registration date: 29th Apr 2015
those dices are so colorful. it's like they were designed to be eaten

Posts: 1349
Registration date: 29th Apr 2015
I want to say that posting consistently will guarantee recognition over time, but that's not always true. It was true for me but not every comic is the same. Sometimes it never happens and that's fine, as others have said it's more about your motivations than anything else.
_______________________

Posts: 1349
Registration date: 29th Apr 2015
I've finished two comics, both were short and not in color. The first one I did traditionally, and most of the work was binding the pages together into a book. At the time I was really unhappy but I put as much effort as I could into that comic, it gave me something to do. The second one was done digitally so it took less time, but was much shorter than the first one (12 pages I think)

Finishing that first comic felt great because I could hold the end result. The second one was also cathartic, but I don't think anything is going to beat creating a physical book for me.

I have an ending in mind for the comic I'm currently working on, but it's very far off. I wrote it out a couple years ago and it hasn't changed much since then. Rather not work on Helsirvente until I'm 90... that's something I was concerned about when I started the comic, and now about 5? years have passed and I'm still quite far from any major plot points :')
_______________________ 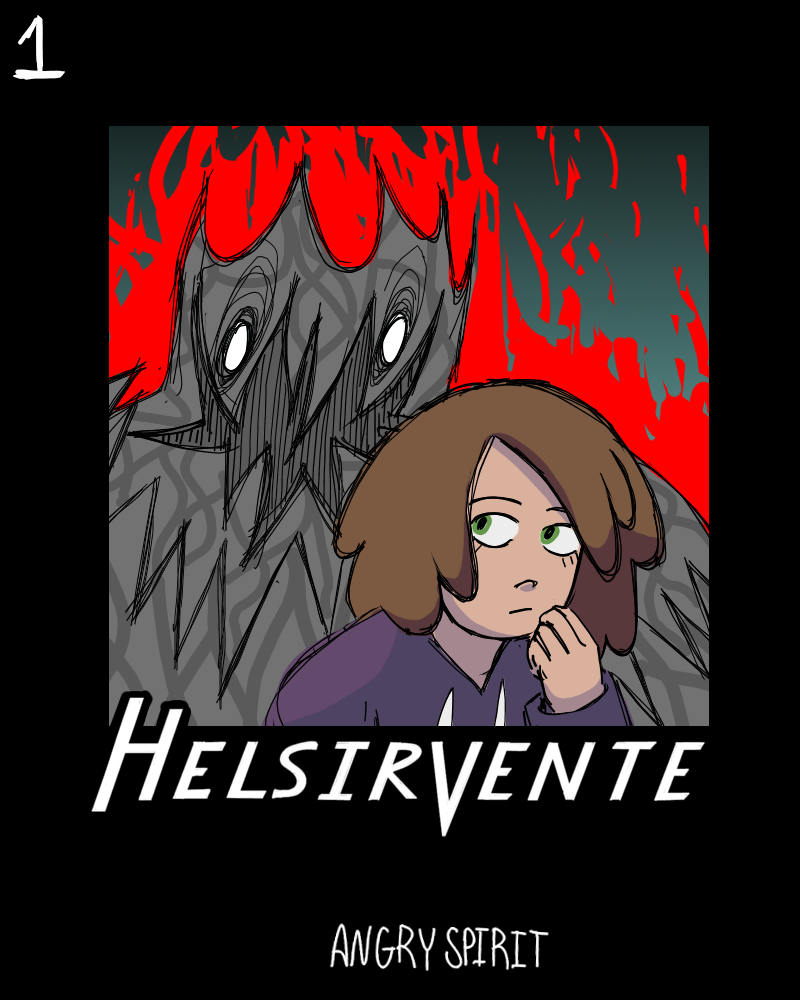 Girl and ghost. I drew this cover using two characters that don't show up in the story at all, to mislead readers. These two characters have no significance whatsoever to the plot, and they have no connection to each other. They don't even have names. It gives the reader a preview to what kind of nonsense to expect later on. 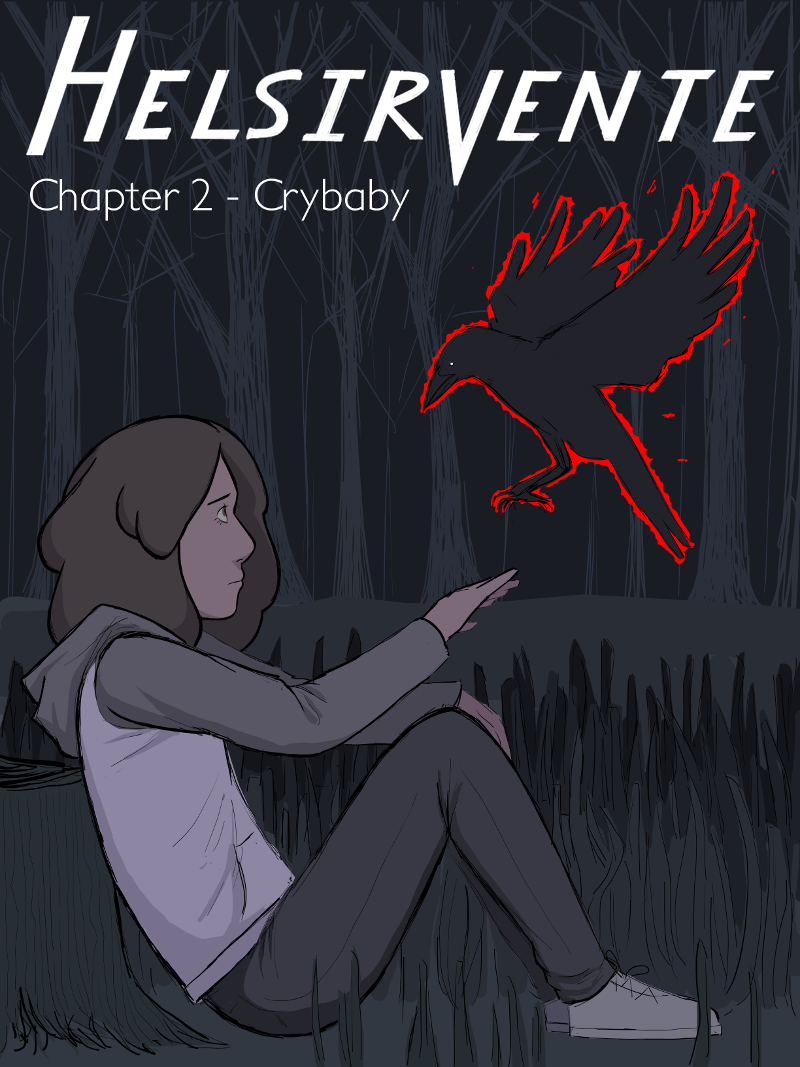 Girl and bird ghost. The bird symbolizes death, and the girl symbolizes fear of birds. This is another trick because the bird isn't actually a ghost, it's a bird. This cover has personal meaning to me because shortly before I drew it, I broke up a big flock of birds outside my apartment and they pecked me to death. I got better, but I'll never forget. 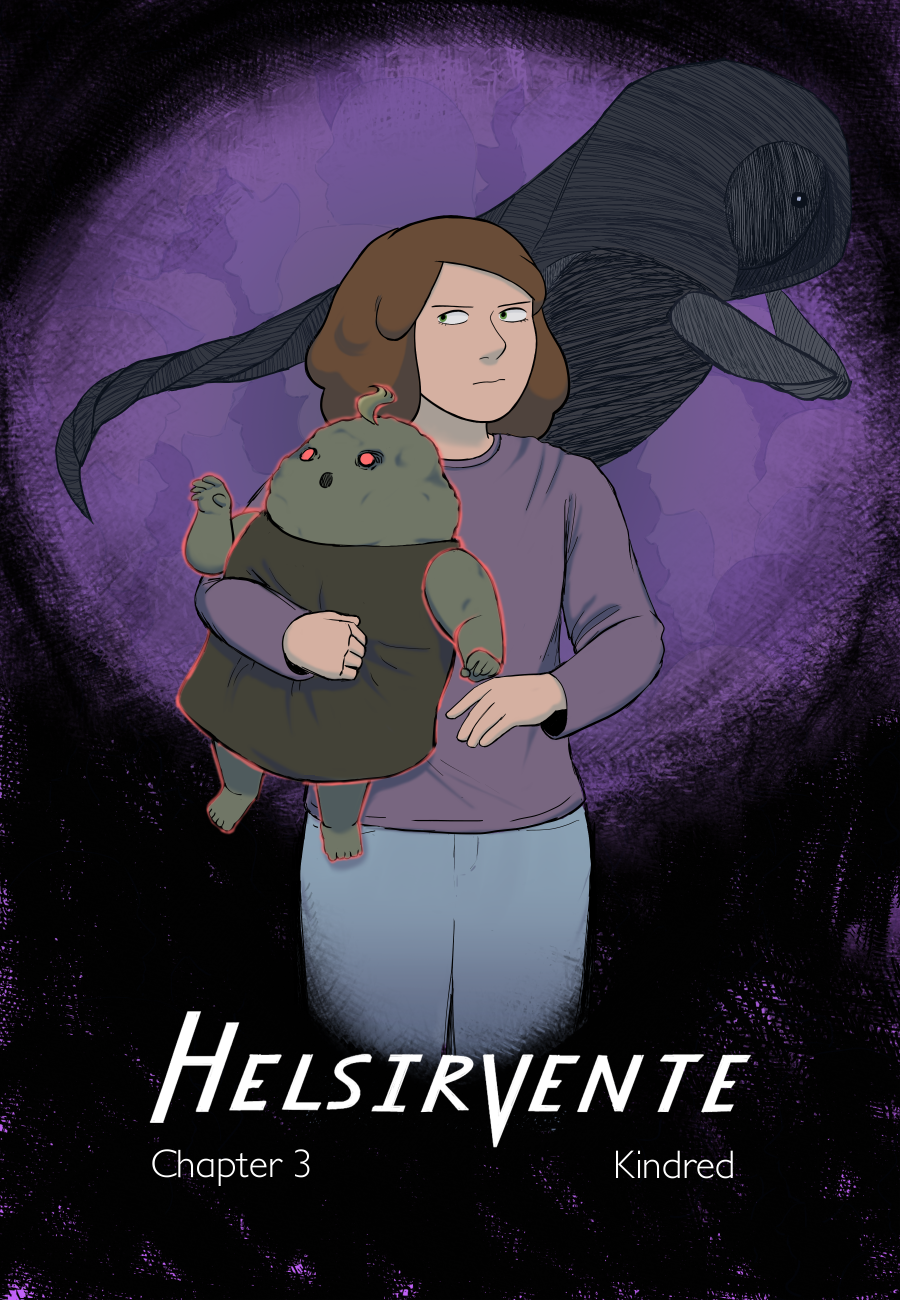 This one has two ghosts, getting fancy. In the background are faces, which reference a new character in that chapter who is very good at shape shifting. The faces combined with the title chapter symbolize how Mariel is kin with everyone, including you. Especially you. The girl looks angry in this one because this is the chapter we find out that she's a jerk. 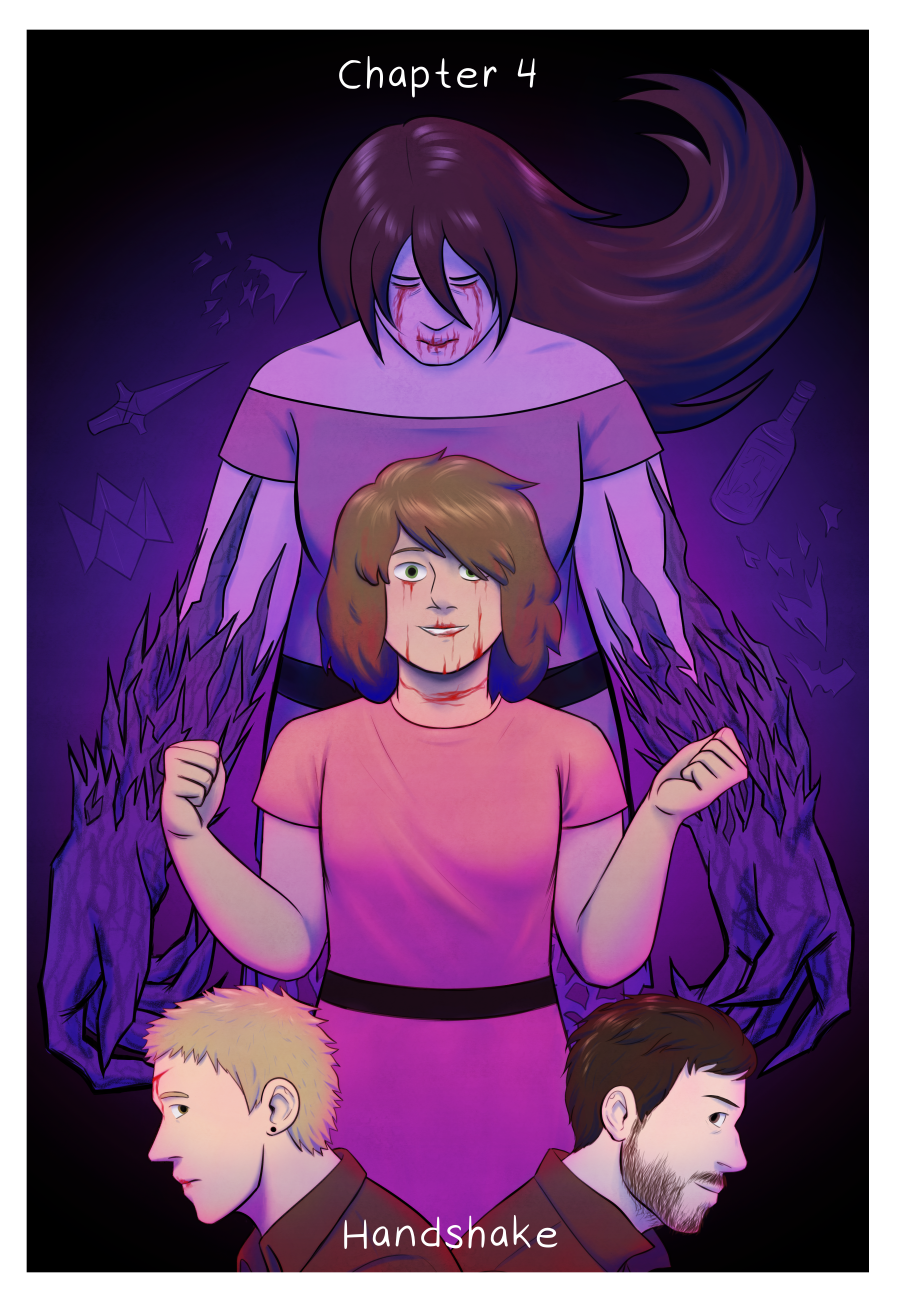 I love this cover. It's the girl again but she's dressed for a party. Her mom's behind her, they decided to wear matching outfits I guess. There's the girl's two boyfriends below her. They're wearing the same thing too, kinda awkward. This chapter is sort of like an intermission with light-hearted fluffy romance stuff, hence all the pink.