Hands down, it's Rick O'Shea. He's a bit of a Luddite. He also has expressed interest in making his own pixel-based games.

Posts: 946
Registration date: 11th Oct 2017
Location: Under a cat
KidCthulhu:Which of your characters is the your readers' favorite?
I wouldn't know for sure, but from what some people have said... Sikue? (which was surprising, she's got the least charisma!)

If each of your characters met a counterpart who looked and behaved very similarly to themselves...

Posts: 653
Registration date: 27th Mar 2015
Location: my minecraft dirt house
the answer to this is Angel and i can prove it with an upcoming chapter plot

while reading a manga, angel grows a burning hate for one of the main characters: takamoto-kun. everything about takamoto-kun makes him feel anger, disgust, fear, sadness etc

then by a twist of fate, angel realizes he's actually takamoto kin

Posts: 828
Registration date: 12th Sep 2017
Location: Ottawa, Ontario, Canada
fedoramoron:Which of your characters probably sells organs on the black market?
Golconda Imports, the company Dahlia Salvador founded before she became President of the largest shipping company on the Atlantic, has a thriving side business in smuggling the discreet importation of magic-working tools, enchanted items, and alchemical reagents. So if you really need a nuckelavee liver or a human skull that whispers visions of the future, she has you covered.

Just don't bother asking for a unicorn horn. There's only one of those left, and it's still firmly attached to the unicorn.

Posts: 2379
Registration date: 19th Apr 2014
Location: Country of Beer and Sausages
My first reaction was: Babette, due to her steampunk preferences - but I think the seldom seen Prof. Lidenbrock would be even more likely to have one...

Posts: 165
Registration date: 20th Nov 2019
Location: The Internet, duh!
Peri. She spent her whole life being too poor to buy any gadgets.

Posts: 1094
Registration date: 7th Mar 2018
Location: Small SC Town
Neypalm Veyper is good with animals, so in a Pokemon world he'd be good with his mons. He would also keep from focusing entirely on fire types, so beating him won't be as easy as "Counter his obvious element".

Posts: 1705
Registration date: 17th Aug 2017
Location: Somewhere between dimensions ⚙️
probably every villain or mischievous person ever, but special mention goes to Alice, who had a habit of putting elaborate traps here and there every Christmas Eve in the hope of catching a glimpse of Santa. this habit slowly faded away over the years, but not completely.

Posts: 458
Registration date: 5th Feb 2019
Location: Canada
Hmmm... I think Jessi would. Mostly because she doesn't drink tea and would totally dick around with putting stuff in it for kicks and giggles.

Posts: 1215
Registration date: 15th Oct 2015
Location: The Emerald Graves
Jacoby or Nathan. I'm leaning more towards Nathan since his parents weren't accepting, so he probably tried to convince himself otherwise.

Which of your characters have the most intimidating presence? Just their presence, without saying a word.
_______________________
Ko-fi DeviantArt Twitter Patreon
---
Reader/Viewer discretion is advised.

Posts: 2379
Registration date: 19th Apr 2014
Location: Country of Beer and Sausages
Sören is tall, broad-shouldered, and usually rather serious, so that would be him.

Which of your characters is the most likely to get into an angry rant when a movie or TV show gets something wrong concerning their field of expertise?
_______________________

Which of your characters is the most likely to get into an angry rant when a movie or TV show gets something wrong concerning their field of expertise?

Clara definitely. Seeing as how she wants to be a reporter, she's all about getting the facts right. Tyler would gently correct them. Jamie would too, although it depends on the situation. When watching sci-fi movies, their alien and space facts are constantly wrong, which makes her laugh more than anything else. But if a movie gets something wrong in the case of a serious situation, Jamie would be sure to tell her friends what the correct answer is. And Bolt could care less.

Posts: 35
Registration date: 14th Nov 2019
Location: New Hampshire
Though none of them would know who Dave Matthews Band is, Pike would probably secretly like them. Kveikur would like them but he wouldn't be secretive about it lol

Posts: 219
Registration date: 26th Sep 2019
Location: Rising from my own ashes
Mister-Saturn:
Which of your characters could win in a hotdog eating contest?


...provided that his self-replicants count as ONE person in the contest. 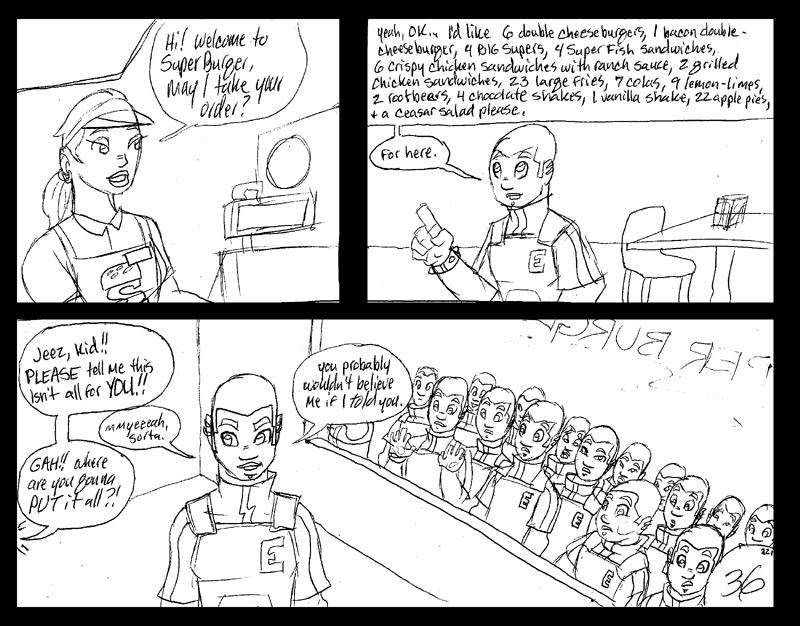 Of course, Eddie has a pretty healthy appetite even when he's just ONE guy.

Posts: 458
Registration date: 5th Feb 2019
Location: Canada
Oooh that's a tough one. I'd say Alex. He has an eye for detail (developed through his interest in history and fine arts) and a strong investigative streak. He likes to really check things out when something's up... part of what made him qualify as a special forces caprain at a young age.

Hayat and Jack both adore spicy food. Hayat's mom apparently makes the best spicy fish seyal you've ever tasted. Hayat herself isn't much of a cook, though. Fortunately, making pizza doesn't require much culinary skill unless you're the doughmaster.

The power couple in my comic are Sarah and Olivia. They've been the adorkable couple my readers loved since their first appearance. That's them in the middle of my avatar, BTW.

Which of your characters is the least like you (the comic artist/writer)?

Posts: 11
Registration date: 5th Dec 2019
Location: my secret hideout
Victor? I mean he's a bully and a jerk. I'm a jerk sometimes but not that sort of jerk... He's sort of based more on other people than myself (though really quite loosely). And he's pretty strong and a guy so that's another couple points against him being like me...