Posts: 165
Registration date: 20th Nov 2019
Location: The Internet, duh!
Ashter. He's a creepy dude in his 30s who is sort of sexist AND is in an evil organization.

Posts: 270
Registration date: 19th Nov 2018
Location: United States
Reggie, probably, since he spends the most time with electronics. His main? Link because they look similar and both use swords or whatever the top tier characters are.

Posts: 219
Registration date: 26th Sep 2019
Location: Rising from my own ashes
BustyLaroo:
Which of your characters would secretly want to be a cat because they know where it's at?

Posts: 231
Registration date: 3rd Jan 2016
Phoenix In Crisis:
Which of your characters would REFUSE the gift of a special superpowered doohickey?
(Like a Green Lantern Ring, or Bill & Ted's phone booth)

I would guess Nate. He'd probably be too afraid of potential unintended consequences.

Posts: 2379
Registration date: 19th Apr 2014
Location: Country of Beer and Sausages
Camilla did in fact live through WWII, fought against a flotilla from Nazi Germany's navy - and went out of this engagement victorious!

Posts: 1550
Registration date: 15th Mar 2012
Location: Redding, CA
My artistic one is a character I don't use much, called Canvas. People can see him in the American Cowboy stories in Karabear Comics Presents. I mean, his power is that whatever he draws becomes real, so you'd at least hope he's a good artist.

Posts: 828
Registration date: 12th Sep 2017
Location: Ottawa, Ontario, Canada
Most of my protagonists work at a delivery pizza restaurant and most of my antagonists work for a shipping company, so you aren't going to find people getting lost frequently. The one I see as most likely to get lost is Derain the black bull, leader of the Beasts and enforcer for the Empire of Light. He hews very strongly to a very specific image of masculinity that just happens to include never, ever asking for directions. Fortunately, the other two Beasts are avians (Metzinger the painted crane and Delaunay the regent bowerbird) who generally have excellent senses of directions due both to keen magnetoception and experience seeing the world from above. They do their best to keep their friend on track, but he doesn't always listen … Okay. He never listens.

Yes, they are all named after Fauvists. I would have made Derain after Matisse instead, but I felt it more appropriate to name him after the founder who collaborated with the occupying Germans instead of the one who fought them in secret.

Joseph had a really bad trauma right after he turned 7, crushing his legs pretty badly so they never properly healed and weren't able to grow right even with various treatments that ensued. I'll show the accident itself in a flashback probably after the next chapter.

Some people emotionally move past their trauma, but Joseph never did. He is really defensive against people seeing his legs, is sensitive when people stare for the way he moves, hates needing to walk with a cane, and hates how it holds him back from getting jobs he wants. Additionally, because his legs grew unevenly, he has hip and spine problems and deals with chronic pain issues, so he's physically sensitive in addition to emotionally/psychologically.

Posts: 2379
Registration date: 19th Apr 2014
Location: Country of Beer and Sausages
Oh, that's definitely Babette! Her father is an extreme technophobe living on an isolated farm - and she had the sheer audacity to become an... an engineer! (Gasp!) Scandal! A shame for the whole family!

Posts: 11
Registration date: 5th Dec 2019
Location: my secret hideout
It depends what the drawbacks/necessities are of being a vampire/werewolf. If it was the urban fantasy/sometimes supernatural romance kind with basically just getting to be cool (i.e. werewolves that can change whenever they want with no mental issues, and vampires that just need blood every so often or not at all and don't burn in the sun), then I'd say Roxanne might be keen on being a werewolf just because it's cool and she's not very strong so she'd like the extra strength most werewolves get.
Victor and maybe Lucio (magic guy with reddish hair, shows up in page 9) would want to be vampires (even if there were some drawbacks) because they both like having power and are... not exactly paragons of morality. And the whole "literally the only non-evil power you have is immortality" thing wouldn't bother them that much. Victor would be a bit more prone to it because Lucio is already pretty powerful and would know the risks better.
If it was "mostly a curse really" werewolves, then nobody I can think of would want that. Probably same for the really gross looking vampires.

Which of your characters could cause the most damage without using magic or special powers? (or whatever other weird stuff your universe may have)
_______________________

Posts: 219
Registration date: 26th Sep 2019
Location: Rising from my own ashes
Team Stormbow:
In a similar vein, which of your characters is a crack shot? (Or otherwise would be given the right circumstances).

Rex Riley has been taught to use firearms and hand weapons by his grandfathers since he was 9 years old in anticipation of dealing with the dangerous weirdness that would later befall his city and possibly the world.
His mates, Felix & Camilla are no slouches when it comes to gunplay, either. 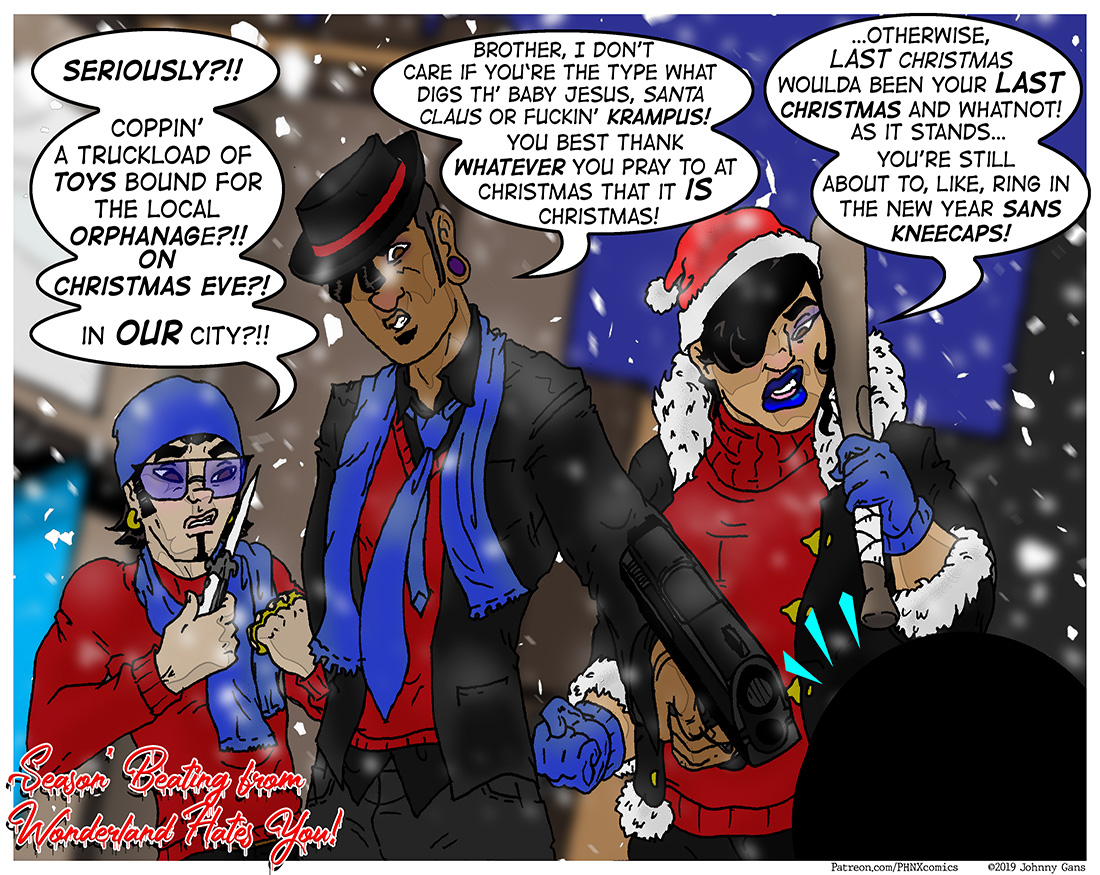 Posts: 458
Registration date: 5th Feb 2019
Location: Canada
Ooh would definitely be Alex. His ability to stay calm and focused has long been an asset and he's worked hard to develop it. Plus he knows how to egg people on when needed. :D

Posts: 919
Registration date: 2nd Oct 2017
Location: the local dump
BustyLaroo:
Which of your characters is most likely to pack up and move to the mountains to become a hermit?

GIDEON. One hundred percent. He’s so likely to do it that he already did it. He is extremely lonely and secretly regrets his decision, even though he’s afraid of everyone.

Posts: 231
Registration date: 3rd Jan 2016
Lutzbug:Which of your characters is the worst driver?
Due to the fact that she's so short, Irene faces the most challenges with driving.