Posts: 828
Registration date: 12th Sep 2017
Location: Ottawa, Ontario, Canada
mitchellbravo:Which of your characters is most vocal, paranoid, and polar about their alignment on the Kinsey Scale? Although outside of her design, it doesn't actually come up that much. Her arc is primarily about coming to understand that her suffering doesn't invalidate the suffering of others, even if she seems to have it worse.

Which of your characters would host the most elaborate birthday party for themselves?

Which of your characters would host the most elaborate birthday party for themselves?


For the record, I didn't pick that question because Fox would do this. It just happens to be my birthday today.

In answer to your question, that would be Ava Lanche. She's a hideously spoiled mean-girl who tries to fill her emptiness questionable boyfriends and partying to excess. She definitely would host a huge birthday party just to be in the center of it.

Which of your characters has an evil twin/clone/counterpart from another dimension?

In an older story arc while visiting a haunted house, she came across a possessed mirror that created a demonic alternate universe version of her that was going to try and replace her.

She was stopped, but this last year, I did another story arc that brought her back, but now in the end, she is stuck in our world as a human.

Which of your characters is the type to enjoy doing intense challenges like eating super hot/spicy foods or eating a giant pizza in one sitting?
_______________________

In an older story arc while visiting a haunted house, she came across a possessed mirror that created a demonic alternate universe version of her that was going to try and replace her.

She was stopped, but this last year, I did another story arc that brought her back, but now in the end, she is stuck in our world as a human.

Which of your characters is the type to enjoy doing intense challenges like eating super hot/spicy foods or eating a giant pizza in one sitting?

Definitely Kat. She might not eat a huge amount since she doesn’t need to eat to survive physically though.

Posts: 219
Registration date: 26th Sep 2019
Location: Rising from my own ashes
Sikyanakotik:
Which of your characters would host the most elaborate birthday party for themselves? 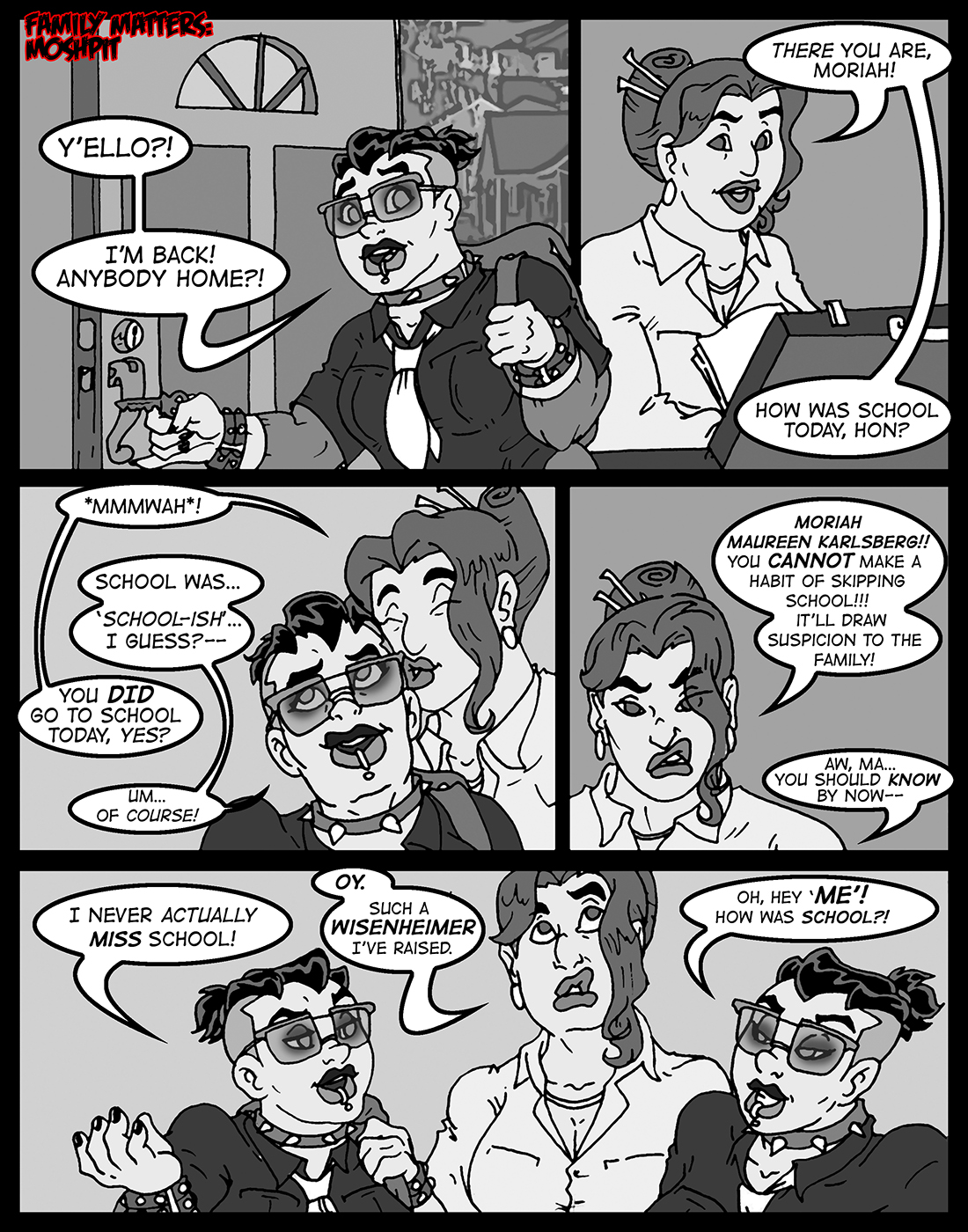 
KidCthulhu:
Which of your characters has an evil twin/clone/counterpart from another dimension?
As parallel reality is one of my very favorite genres, and I use it in way-too-many of my way-too-many comics, the better question at this point would be which of my characters DOESN'T have an evil twin.
At present, the easiest answer to THAT would be The Misfits of Mischief Mind you, they USED to have evil counterparts, but, I've since erased those evil bastards from continuity, leaving the original Monroe, Quinn & Bjorn as the three and only.
(EVIL Misfits of Mischief is just too horrible to contemplate!)

Which of your characters is the type to enjoy doing intense challenges like eating super hot/spicy foods or eating a giant pizza in one sitting?

Minion Beta of S.C.A.R.R.ed For Life fits this bill. 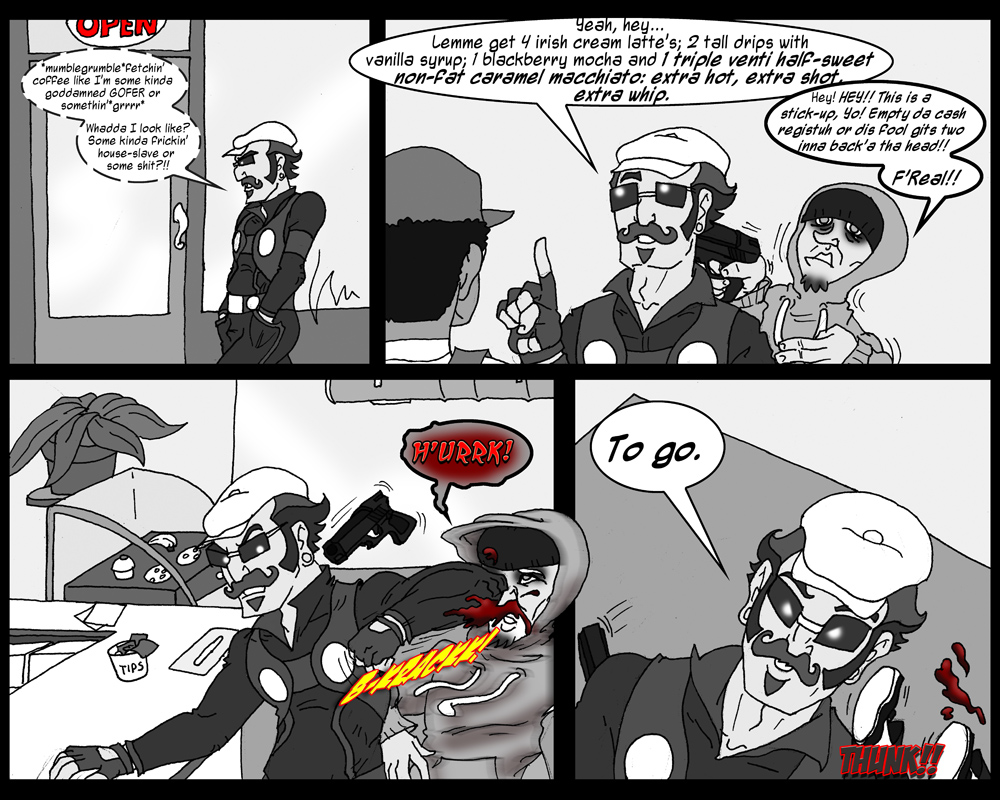 
ShaRose49:
Which one of your characters is the fitness junkie?

is a bit of a gym rat during his off hours from the diner.

Posts: 11
Registration date: 5th Dec 2019
Location: my secret hideout
Which of your characters is likely to NATURALLY be the BEST at gambling, due to either luck OR skill?
(Or both, without the use of magic, tech or superpowers)!

Probably Roxanne (though she isn't legally old enough to gamble), she's technically superpower-level smart but that only applies to mad science stuff. However, even without application of superpowers, she'd do pretty well. Counting cards, checking odds, etc. And hopefully, by the age where she'd legally be able to gamble, savvy enough to not make it obvious and end up banned.
Or ever, ever, ever play the lottery.

Posts: 919
Registration date: 2nd Oct 2017
Location: the local dump
Silver42:
Which of your characters has gotten in trouble for the dumbest thing? (not dumb policies, just stupid acts on their part.)

Absolutely Dempsey. I’d argue that the entirety of KNM is the result of him being impulsive. When he was a kid, he got in trouble for sticking a pencil into the running blades of a fan and breaking both the fan and the pencil. Pencil pieces and sawdust flew everywhere.

Posts: 369
Registration date: 23rd Nov 2019
Location: nj
Cecilia, and, odd as it may seem, Joseph. Both are singers and appreciate the art and the physicality of opera.

Posts: 828
Registration date: 12th Sep 2017
Location: Ottawa, Ontario, Canada
mitchellbravo:Which of your characters participates/d (voluntarily or unvoluntarily) in a sport and is/was given a hard time about it because it doesn't match stereotypes of their gender?

Hayat is an ardent practitioner of Muay Thai on her days off, having begun when she was 15 at her local community centre. Many of her peers believed she would quit soon after realizing the art is much more demanding than a typical "women's self defence" class. Instead, she stuck with it long enough to earn her red armband* and become one of her Kru's star pupils.

* While traditional Muay Thai doesn't have a ranking system, international schools typically use an armband system similar to the belt systems of Shotokan karate. Red is two levels below black and typically takes 600 hours of practice to earn. Since these are a recent addition to the art, Muay Thai generally doesn't treat armbands as status symbols or as a reliable indication of skill, but primarily as an indication of how much time the practitioner has devoted their art. Indeed, Hayat's superior strength and momentum have helped her defeat many brown- and black-armband students in tournament matches.

Posts: 509
Registration date: 6th Jan 2017
I think the Arevodians are religious, they're Christian. Maryam is a Muslim. I haven't declassified the less obvious ones yet.

Chantilly is obsessively organized. A place for everything, everything in its place, and she can put her hands on anything you might need at a moment's notice.

I choose to answer C, because I think my characters are too old to be afraid of the dark, and I've never completely understood the fear of clowns, so I see no reason to endow any of my characters with that trait.

The one who's most afraid of being alone would probably be Bracy, based on what we've seen so far in the comic. He's the kind of guy who has a lot of casual friends, but only a few truly close ones. I haven't shown much of my characters' back stories yet, but let's just say that if it weren't for Rich and Nate, Bracy's life would probably be a total mess today. He knows that if he were left alone, it wouldn't be good.

A.) Clowns
Emma Grey of Meddlesome has a huge fear of clowns, which will be a plot point in the second story!

Danny McLimmon:
Which of your characters is most like you?

Octavius Xailenrath of Shrimp Fried Riot and My Own Personal Apocalypse
is a self insert chibi version of Me! 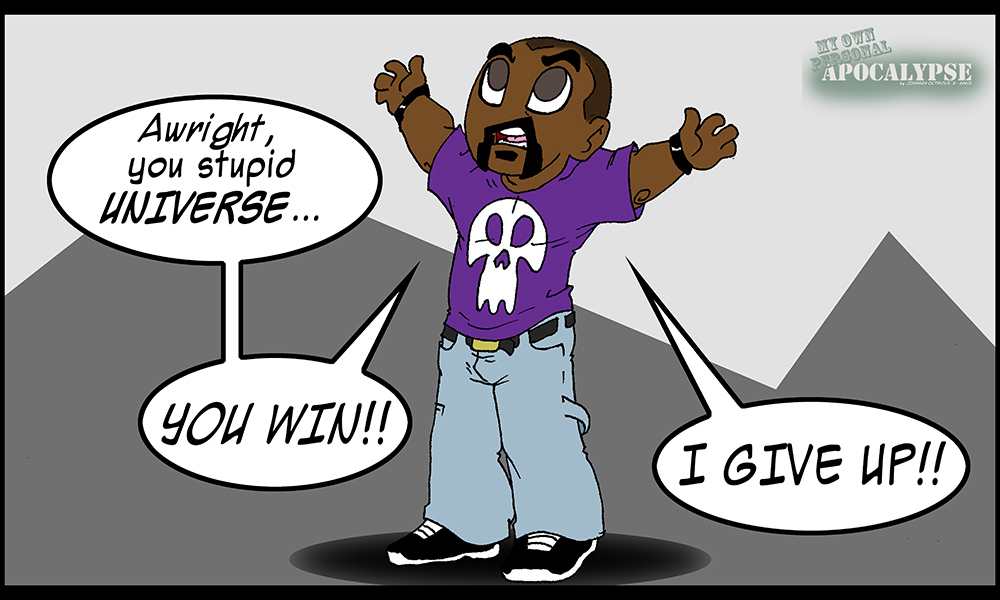 Posts: 2379
Registration date: 19th Apr 2014
Location: Country of Beer and Sausages
Timmy's ToyCo has an own DooTube YouTube channel, and the company's CEO Bettina Timmy is known to appear herself in these videos. Obviously, those are mostly for advertising their products.

Dahlia Salvador is the wealthiest person in Mane, but she's not the wealthiest person with any connection to the story. That distinction goes to River Banks, CEO of Banks Industries. Based in Carson City, Nevada, Banks Industries began as a steel refinery and quickly flourished when it was chosen to produce track for the Pacific Railroad, soon leveraging the power of vertical integration to branch out into related fields. They currently have subsidiaries in transportation, firearms manufacture, robotics, and dozens of other fields.

The headquarters of one of these subsidiaries, Banks/Ayles Construction, plays an important role in Spider Pizza's first chapter. She's also one of Clark's birth aunts, although he has no idea this is the case. It's unlikely at this point that she'll appear physically, as she knows better than to ever be in the same room as Dahlia. But as one of the few Today's Client characters I have full rights to use, it's still possible.

Posts: 219
Registration date: 26th Sep 2019
Location: Rising from my own ashes
Sikyanakotik:
Which of your characters makes the most notable impact on the narrative despite never physically appearing in your comic?

Though he hasn't shown up in-story YET, in Misfits of Mischief, Monroe's Uncle Ray, aka The Raven Spirit, is (secretly) a driving force behind which reality the tricksters land in on any given adventure, and why.
Currently unbeknownst to them, they are usually sent to a parallel reality that Ray has been to and f*cked something up. He wants them to put right what he one did wrong, as penance, at the behest of Ray's lover, Aphrodite.

And, because the question got skipped:


BustyLaroo:
Which of your characters would dream of secretly being in the circus?

Peaches Eisenhart, aka Statuesque from I.W.A.T.S.V. dreamed of being an animal trainer in the circus when she was a little girl. Now, as a very BIG girl, hearing about some of the atrocities that are perpetrated on animals in some circuses, she wants to own her own, humane, circus type show... and systematically destroy the bad circuses. Literally. By force.


Which of your characters has canonically (in your comic or theirs) crossed over with another comic?
(Meaning IN-Continuity, part-Of-The-Story, not just for a jam project or ComicFury Holiday Crossover event)
_______________________


Phoenix In Crisis:
Which of your characters has canonically (in your comic or theirs) crossed over with another comic?
(Meaning IN-Continuity, part-Of-The-Story, not just for a jam project or ComicFury Holiday Crossover event) The Madness popped up in an April Fool's Day for Linn's comic, Latte Bohemia but it ended up being made canon in another page. Considering he unconsciously warps reality without even meaning to, it's hardly surprising.

<edit: Forgot to add a question!>