Posts: 330
Registration date: 19th Nov 2018
Location: United States
Gumdrop so it gives him energy to work out all day and night long.

Posts: 1760
Registration date: 24th Sep 2018
Location: Imagination town
Will from Tsokaka. He's the type of person who would watch Fox News and get absolutely terrified from hearing about the cases no matter how small.

Let's try something different again: If any your characters ever found out they are in a fictional story, which of them would demand changes to their story and be angry at you if you reject the idea?
_______________________

Posts: 216
Registration date: 20th Nov 2019
Location: The Internet, duh!
Jack would probably demand that I revive his pet kitty. Of course I can't, since the death of his kitty at the hands of the Blue Eye Organization is what drives the story forward. If his kitty is revived, he and his friends Ben and Enjo would never end up pursuing the mastermind of the Blue Eye.

Posts: 342
Registration date: 7th Aug 2018
Location: New York
Orange Jewel. I recently pulled a DC Rebirth in my comic and Orange Jewel has become my pretty boy character who thinks the ladies like him more than they do sometimes. I haven't gotten to explore this much yet since but it is cannon in my head still!

Which of your characters never pays attention to the movie they're watching with you because they're on their phone too much then keeps asking what's going on during the movie?
_______________________

Posts: 564
Registration date: 5th Feb 2019
Location: Canada
I can see Kayla doing this if cellphones existed in their universe :P Not because she's not actually interested in the movie, she's just getting very distracted by the phone. lol

Posts: 1242
Registration date: 9th Sep 2010
Location: The real world
Matapang, but it would fail to go anywhere because A. he doesn’t have access to modern birth control and she’s from a state named after an English monarch (“Mary-land? MARY-LAND?!”).
(I assume he’s a highland dude, lowland Scots never sexily pull people through time for some reason.)

Posts: 91
Registration date: 13th Oct 2019
Location: England
Alpha would, she's not the brightest spark around so she wouldn't be aware of how unhealthy large amounts of it would be.

Posts: 1760
Registration date: 24th Sep 2018
Location: Imagination town
Tsokaka for sure. He's over the top with most of the things he does, and if he ever were to make a huge joke, he'd probably drag it out for days before revealing it.

Which of your characters practices nunchucks, yet still hits themselves more than anything? (If nunchucks are unavailable in your setting, then who would be the one who does such activities?)
_______________________

Posts: 780
Registration date: 20th Feb 2015
Location: Sugar Water Beach
Under the right peer pressure, Walter would lead a rebellion. I doubt he'd understand what he was doing tho lol.

Posts: 240
Registration date: 3rd Jan 2016
Dyohna:Which of your characters is the least flexible?
If you mean flexible physically, probably Nate. He's a stockier guy than the rest of them.

If you mean flexible in terms of being willing to go with the flow, probably also Nate. Nate is a very deliberate person, and when he gets it in his mind that something should be a certain way, he has a hard time compromising on it. Bracy is also that way to a lesser extent.

Posts: 1108
Registration date: 27th May 2014
Location: Setting His Controls For The Heart Of The Sun
Danny McLimmon:If you had to marry one of your characters, which one would you choose?

I basically designed all my characters to be the type of women I'd love to marry, so this will be tough. If I had to pick it would probably be Rachel, since she's a musician like I am (she plays keyboard, while I play bass), so we'd have that in common. Plus she's a bit more introverted like I am, so we would respect each others personal space compared to the more extroverted and socially exhausting characters. Plus I would be more than happy to marry a millionaire. Cha-ching!

Posts: 99
Registration date: 6th Dec 2019
Location: New Jersey
SharpyTheYellowKirby:Which of your characters is most likely to murder an entirely innocent person? (for a bonus, tell us their victim!)

That would be Buck Prime. His original goal is killing off his dimwitted but innocent counterpart in our dimension and take his place. But now he just wants to conquer everything.

Which one of your character would you want to see in someone else's comic as canon?

Posts: 873
Registration date: 12th Sep 2017
Location: Ottawa, Ontario, Canada
SharpyTheYellowKirby:Which of your characters is most likely to murder an entirely innocent person? (for a bonus, tell us their victim!)

The Empire of Light has multiple ranks, beginning at Corneal for initiates and working up to Vitreous, Vessel, Retinal, and finally the Oculus and Grand Oculus. The Vessel rank is named after the eye's blood vessels, and promotion to this rank requires "Blood or Blood": candidates must either have a parent at Retinal rank or higher or kill a manablind (a muggle, in other words) using their magic alone. All this is to say that every mid- and high-ranking member save for Rose and Bobby (who are both Vessels due to family) has killed an innocent at some point, and some have killed quite a few.

And yes, that includes "Dada".


KidCthulhu:Which one of your character would you want to see in someone else's comic as canon?

All of them, because that's awesome. If I had to pick one, though? Well, Rose did have an interdimensional portal in her bedroom once which she used to participate in Forged in Fury. She isn't going to use it at all during the actual story, but I still have half a mind to make it canon anyway.

SharpyTheYellowKirby:
Which of your characters is most likely to murder an entirely innocent person? (for a bonus, tell us their victim!)
The version of Milo Mannheim from Malicious Intent

KidCthulhu:
Which one of your character would you want to see in someone else's comic as canon?

I think Rex, Felix & Camilla of Wonderland Hates You would kinda fit in somewhat decently in the world(s) of Autumn Bay and/or The Maximum Speed & Violence saga! 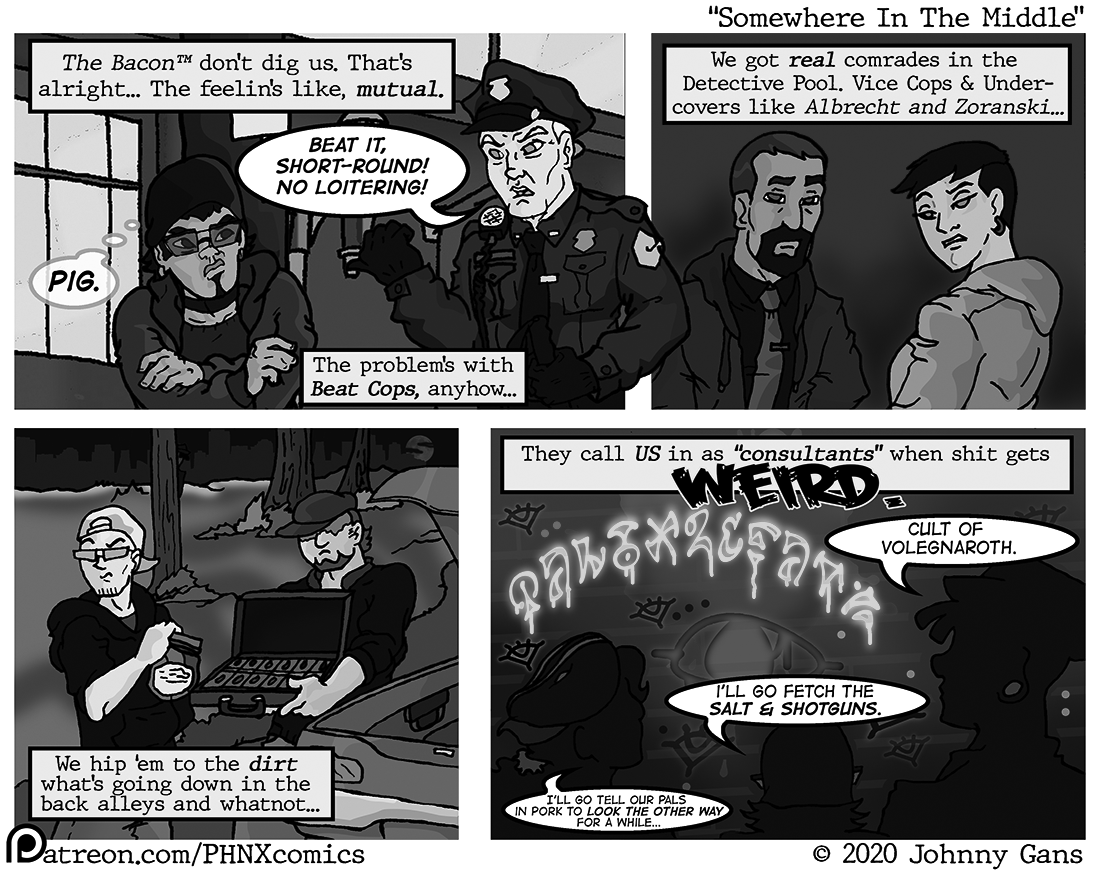 Sikyanakotik:
Which of your characters is most likely to join a cult?

All of them, after their respective, individual alcohol quotas are fulfilled.

Posts: 1760
Registration date: 24th Sep 2018
Location: Imagination town
Definitely Will from Tsokaka. He, of everyone else in the cast, is most prone to scams and over gambling. there is actually going to come a point in time where someone challenges him to a gambling game and he wins it simply because of how often he gambles. he's a lucky guy so of all the characters in my series he's the most likely to win it, but he probably just blow his winnings on more gambling.


I'm going to do something differently this time.

Posts: 1492
Registration date: 12th Mar 2017
Location: Not where I want to be
Umm... Power wanted to be drawn more into manga like style and here I am learning how to do it I guess

If the characters, despite being brought into my reality, are still my creations, I imagine JackO'Lantern would want to acquaint his fist with my face for designing so many monsters.

If the characters are purely real, without my input, probably Tesla and Treefrog. I'm pretty beneath notice.