Posts: 398
Registration date: 8th Dec 2019
Location: Oregon
When you're drawing a comic, you have to really think about what you can draw more easily over and over again, so most people won't have super complex characters like you see in a lot of video games, especially JRPGs, that can get away with it since they're using models.

Do you ever wish you could make your character more complex for the sake of aesthetic, if it wasn't going to be a nightmare to draw?

Posts: 170
Registration date: 9th Dec 2019
Location: Italy
I don't like complex designs per se, I actually prefer simple ones: my ideal character design is that of Myiazaki, and he always worked with simple designs.

Posts: 398
Registration date: 8th Dec 2019
Location: Oregon
marcorossi:I don't like complex designs per se, I actually prefer simple ones: my ideal character design is that of Myiazaki, and he always worked with simple designs.

Edit: and also Rumiko Takahashi, who also has quite simple designs.

Ah both big inspirations for me! I do prefer the simpler designs overall, it's just on occasion I get this curiosity of 'what if I just went wild with this', or there's a character who I feel would over accessorize.


demontales:More of my characters would have visible tattoos.

Tattoos is a good one, yeah! The only way I can see a complex tattoo being made easily repeatable for a comic would be to draw the design once as one big transparent image, and then paste and mess around with it until it looks right.
_______________________

Posts: 2048
Registration date: 17th Aug 2017
Location: somewhere in the mafia dimension
I like simple and minimalistic designs, and I especially want to avoid the cluttered messes you can find in 90s comics, but that doesn't mean I don't have fun. I find a middle ground between tryhard humanoid mass of confusing lines (nope) and simple shapes (acceptable, but the universe can't be all about blobs or blank stickmen).

I think the trick is having an art style that lets you get away with it. my characters are cartoony, so I don't have to worry about realistic stuff like every fold of fabric or every line on the face, and that lets me indulge in my love of retro, colorful, dream-like designs.

I like drawing symbolic patterns again and again as long as they're clear and easily recognizable. I'm also fond of aliens and other very non-human lifeforms, so sometimes it's worth going the extra mile. when I was younger, I mixed preexisting character designs to create whole species, and ended up with things like apes with spider legs, or house spirits with humanoid, avian, and other animal elements. Posts: 1061
Registration date: 5th Feb 2019
Location: Canada
Yeah most definitely. There are some killer character designs out there but the necessity of simplicity is just ... inevitable. I mean, on the upside, there's nothing stopping us from doing some illustrations of the characters in much more complex, detailed outfits/designs :D
_______________________

Posts: 453
Registration date: 4th Nov 2018
Location: Australia
I'm not too fond of complex designs because I have sensory processing disorder (part of being autistic), so I have trouble comprehending a design if it goes too ham on the details. Then there's stuff like tattoos that's just too much effort to be worth it - depending at least. Things like standard sleeve tats I'd never do, but there's a minor character who does have the logo of his gang tatted on his bicep - that's simple enough to do. That being said, going ham is a good way to let off creative steam.
_______________________

Posts: 2956
Registration date: 24th Sep 2018
Location: Imagination town
Nooo noooo. I've learned from many complaints that complex character designs don't necessarily mean good character designs. Then again, a point can be made about how much it depends on what medium your character is being adapted to. If you are creating a character for a JRPG, where how your character dresses and acts will entirely depend on what the player does, it may pay not to give them a unique asthetic. i remember a youtuber saying this is the biggest reason a lot of video game protaganist don't talk, because at the end of the day the goal is for the player to project themeselves onto the character since they will be the one controlling thier actions, how they dress and even their personality.

In that instance, the armor might matter more than the design of the character themselves, as the armor is ultimately what will aide in deciding what identity the character has depending on what the player wants. Personality is projected onto them, so they need to be vessels for what type of equipment will be available to the game.


But for mediums where the character has their own personality or aren't supposed to be projection characters, it may pay to focus more on what look will establish their identity. Complex designs can also be a bit hard to follow. Not that I'm saying people don't have to use complex designs if you want to. But it isn't something I ever thought was that important.
_______________________
Avatar by Linguine

Posts: 538
Registration date: 5th Jun 2012
Location: NJ
I would love to use more complex designs, but my style doesn't particularly allow for it past a point. I feel like I'm already at the limit with it, without my pens smudging things into incomprehensiblilty.
_______________________
Whether you give your two cents or I give mine, it still isn't worth much to anyone.

Check out my written works, 'Peaches and the Pooka' and 'Desperate By Dusk' on Amazon!

Posts: 742
Registration date: 5th Dec 2012
I wondered about using 3d models and adjusting the settings to make it look 2d. Might save a lot of time. Perhaps not so good for conveying character poses and actions in a stylised way. Most comics are made by single authors though, so it might pay to make some concessions. It's a lot of work.

I agree with what other people are saying though. Some comics have absolutely amazing artwork but I just don't have the energy to read them because there's so much visual noise. You have to take into account the context of the artwork and what it's trying to achieve.
22nd Jan 2021, 11:42 PM #16
CrazyTaizy

Posts: 92
Registration date: 13th Jan 2021
Location: In the back of your miiiiind
I suppose it depends on the level of complexity, not so much for how often you draw them but more for making sure it doesn't drown the character in details and they get lost.
That being said, I have an Orc character I want to give a big arm tattoo to, just needing to find the right balance for him.
_______________________

Posts: 2956
Registration date: 24th Sep 2018
Location: Imagination town
jellyfishin:For me, it's not so much wanting complexity as it is wanting more detail. For example, my main character has a vest chain, and as cool as it would be to see tiny individual chain links, drawing individual chain links is too much effort for too little gain comic-wise.

That's an interesting point too. I remember seeing a video by a design student that made a case similar to that. For example if your character is a warrior including scars on their body is a good way to make the implication that they have been in many battles and are an experienced warrior more so than giving them hyper detailed armor. Another interesting thing are knick knacks and small details that includes supplements about the characters personality.

In the game No More heroes there is a character known as shinobi(I think that's her name the black girl with the large afro (˘･_･˘) it's been a while since I've played that game).

one of the most interesting things about her is how she always dresses and accessorizes her gear and clothing to suit her personality and interest. she has a Japanese cell phone and Japanese toys attached to her katana as well as dressing in the Japanese Lolita style (despite the fact she is American). She is the female counterpart of Travis touchdown, an otaku assassin whose techniques and personality are inspired by Japanese and anime culture. and the funny thing is the characters never say this. Their personalities are implied not only in the way they dressbut in the way they act as they also play anime games and have a bunch of anime DVDs laying around their apartments.

It's one of the most appreciated thing about the characters from those games, detail can give your characters so much more impact and believability.


And honestly it can be true that character design probably doesn't even stop at appearance. Hirohiko Araki (famous for JoJo's bizarre adventure I think everyone knows what it is LOL) once stated in his book that when he creates this characters he goes as far as thinking on what their favorite color is what their favorite foods is and even criminal records. I'm notsure it's an okay thing to say people should strive to go that far, but keeping things like that in mind probably adds a lot more depth to the character than just stopping at the way they look. considering your character's history can also contribute to bettering their visual design as well.
_______________________
Avatar by Linguine

Posts: 78
Registration date: 13th Nov 2015
Nah. Ive always believed less is more. When i design my characters i have to keep in mind I want to enjoy drawing them, not dread it. Not only that, when you over clutter your designs it makes their silhouettes harder to read. An example of outfit fatigue is in Naruto, Masashi kishimoto redesigned Sasukes outfit to this mess 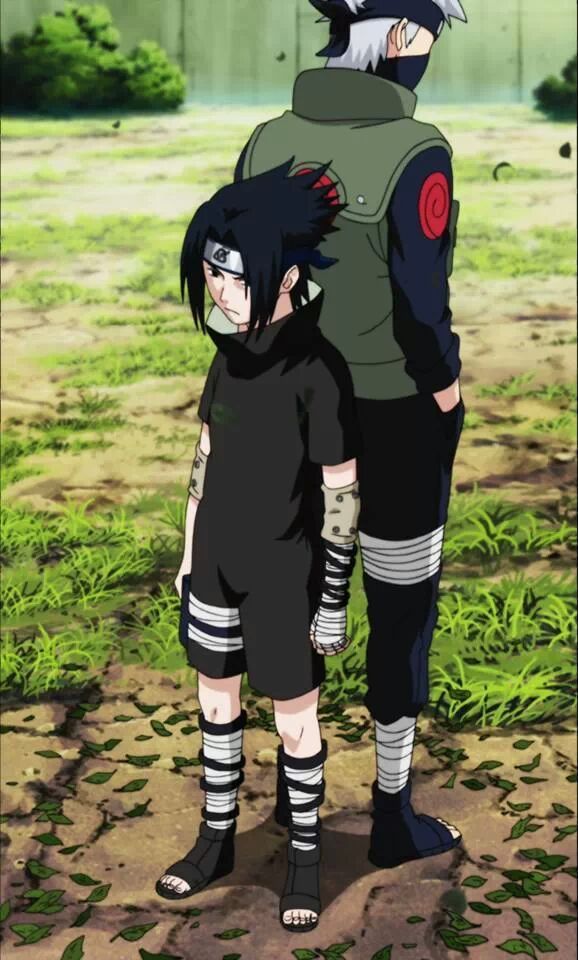 And regretted it and almost immediately changed it back, saying it was a huge pain to draw over and over even though he thought it looked cool. I wanna avoid that at all costs, I already have some characters who are pushing it with that balance between "ease of drawing" vs "complexity of design" for me at least. I've wanted to give characters tattoos before but never have because they're just too hard to draw consistently over and over.
_______________________

Posts: 100
Registration date: 20th Nov 2019
I think it's possible to have interesting and unique character designs without them being overly complex. Adding some creative details can be a great way to add some flair personality to a character, but add too much and you'll end up with something that's both overwhelming for the reader and an annoyance for the artist.

That being said, I do have a character with some very intricate tattoos. I love the way they look, but boy do I hate having to draw them. 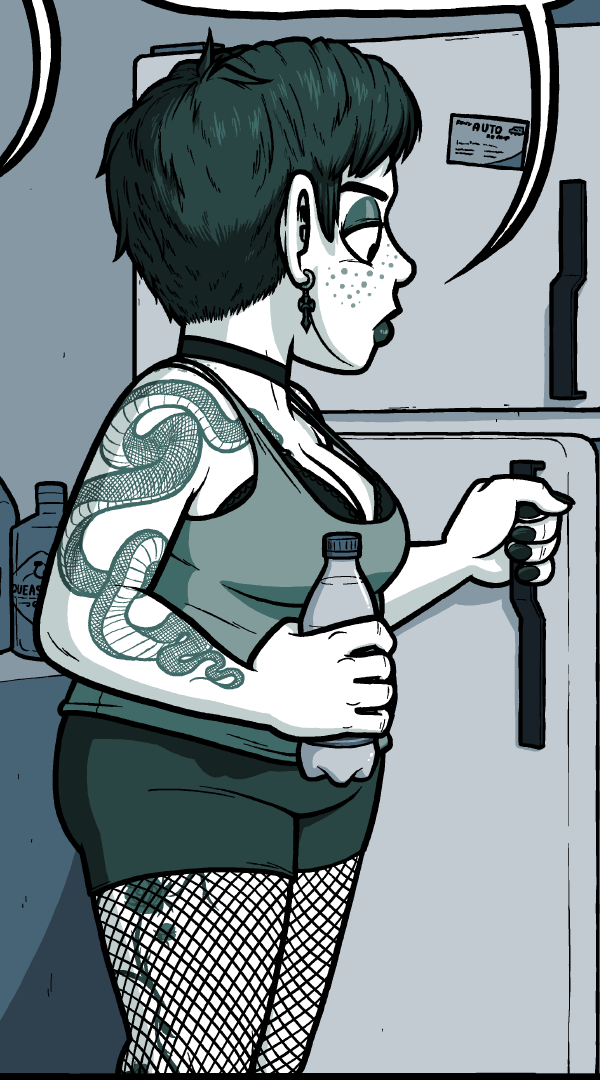 Next Page >
Forum > Webcomic & Art discussion > Ever wish you could complicate your character designs?
Pages: 1 2