I'm making this one mostly for my own enjoyment, but, should I, by some miracle, gain a fan base before this comic is done, I will be posting the updates, extra scribbles, world-building stuff, trivia and backstories and such here.
I am also posting this stuff here, as it seems that overall, readers seem to be way more comfortable posting to forum pages than to the comment sections of the actual comic. I don't know why, but, there you are. (Not that it's ever worked out for me, either way, aside from a couple of diehard fans.
You know who you are, and thank you from the bottom of my heart for engaging.)

Anyway,
I had planned to release this comic in February, when I brought back the other 2 or three comics I am doing.
(Yes, IWATSV and Rose-Tinted World will return! I am even working on the next chapters of Meddlesome and Evil Empire, but, like I said - February. At the EARLIEST!)
I jumped the gun a bit because I was just so excited to have me art mojo back after a VERY long dry spell.
I said to myself that I'd release Kraken either in February, or when I had 10 pages done, whichever came first.
I got 10 pages done!
(I'm putting ink to the 12th page as I type this.)


So, going backward, let's begin from page zero:
This comic will not be PG, PC, or otherwise for family-friendly viewing.
I don't usually do 'trigger warnings' or whatever, but, a lot of characters and story elements will be taken from my own life, despite the fanciful nature. My life and that of others I have known. It ain't all pleasant, and while I generally don't go outta my way to make things too "REAL", it might just GET real before it's over.
Don't come crying to me if I write about things that are all too true, if somewhat unpleasant to your sensibilities.

page 1:
SEX and NUDITY. It'll happen.
This page introduces our two main characters, Polly and Omar.
Don't call him "Omar", though, as he has changed his name and identity.
Polly isn't her real name, either.
Also, as stated in the author note: The entire first chapter is a series of flashbacks to get you up to speed.
I have restrained myself from putting concrete dates down - simply "Month, X-amount of years ago". My own sliding scale of time. I promise I won't be as bad as Marvel.
(I'm looking at YOU, Ben Grimm, Black Widow and Punisher!!)
So, note that NONE of this is in the "here and now" yet!

Page 2:
Orson Scarpacci - the name will have significance.
And, did he say "Super Serum"? He DID.

Page 3:
Former child prodigy, Dr. Miranda Lucas just got fired from her job. Someone is waiting right there to scoop up her talents... almost as though he KNEW it was going to happen!!
Coincidence?! Maybe.
Will we be seeing more of Nachtmuzik Munitions Corp.?
Maybe.
Dr. Lucas graduated high school at age 10. College at age 12. MIT at 15, where she was recruited by Nachtmuzik Munitions R&D. Fired at 17, as seen on the page.
Needless to say, the young closet-goth with the overbearing parents' social skills are a bit "askew". We'll get into that later.
She has an alias, it seems. "Dr. Coolbeans". Now, why would a 17 year old genius need a pseudonym?! Could she possibly have been engaged in illegal activities?!
Maybe. 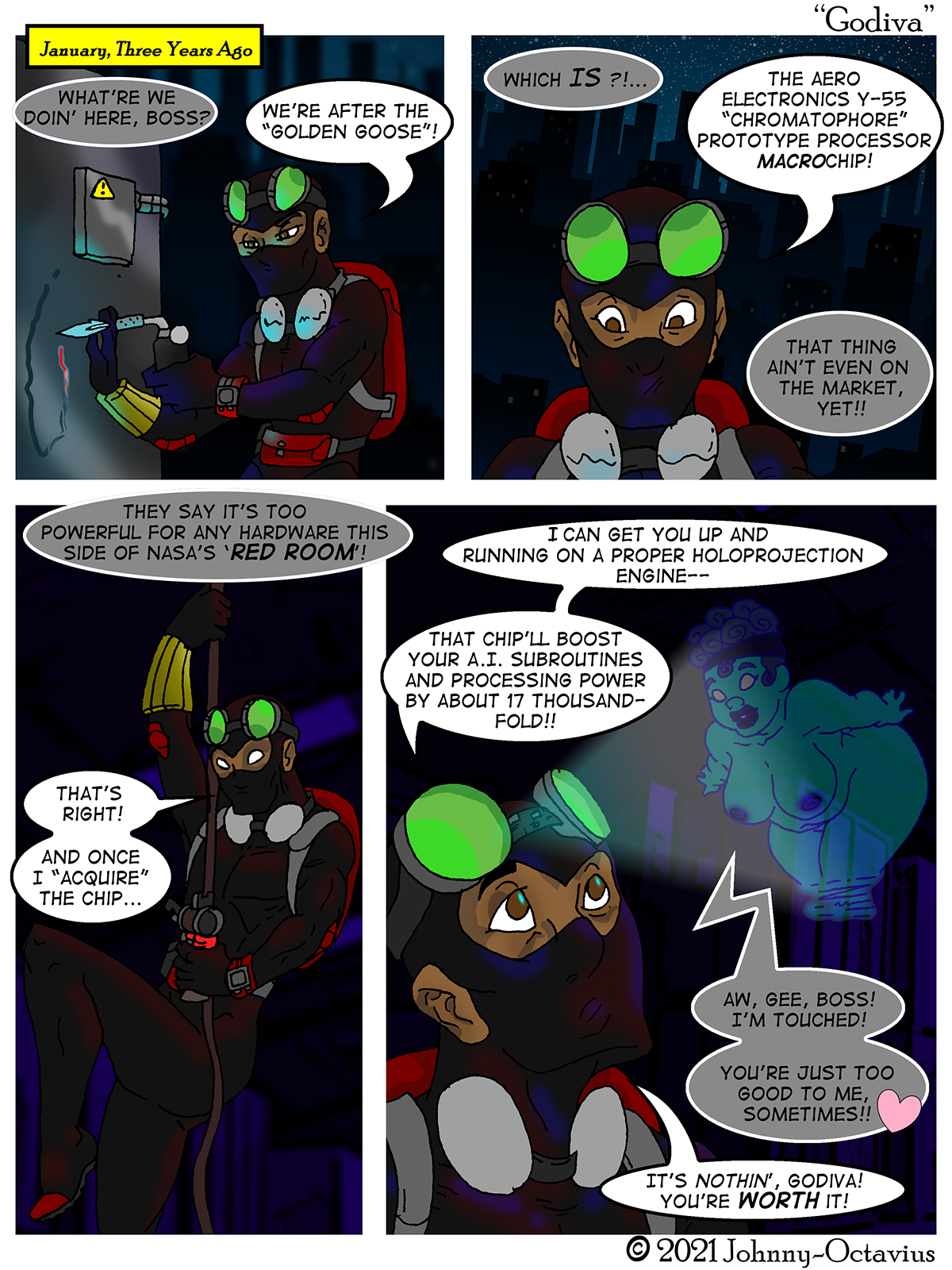 It introduces two recurring characters, one of whom is named "Godiva". Guess why.


PLUS: Even though we just started, Kraken already has it's first piece of gift art:
A head shot of (present day) Dr. Coolbeans from Casscade!! 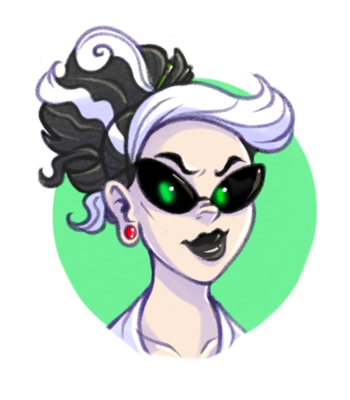 Posts: 240
Registration date: 7th Aug 2020
Location: PNW
Page five sees the aftermath of Redback and Godiva breaking into Aero Electronics.
Orson Scarpacci aka Typhon must hold a lot of weight at the company to utilize an entire squad of Aero Security to catch ONE man!
(Or to even be there at ALL!) 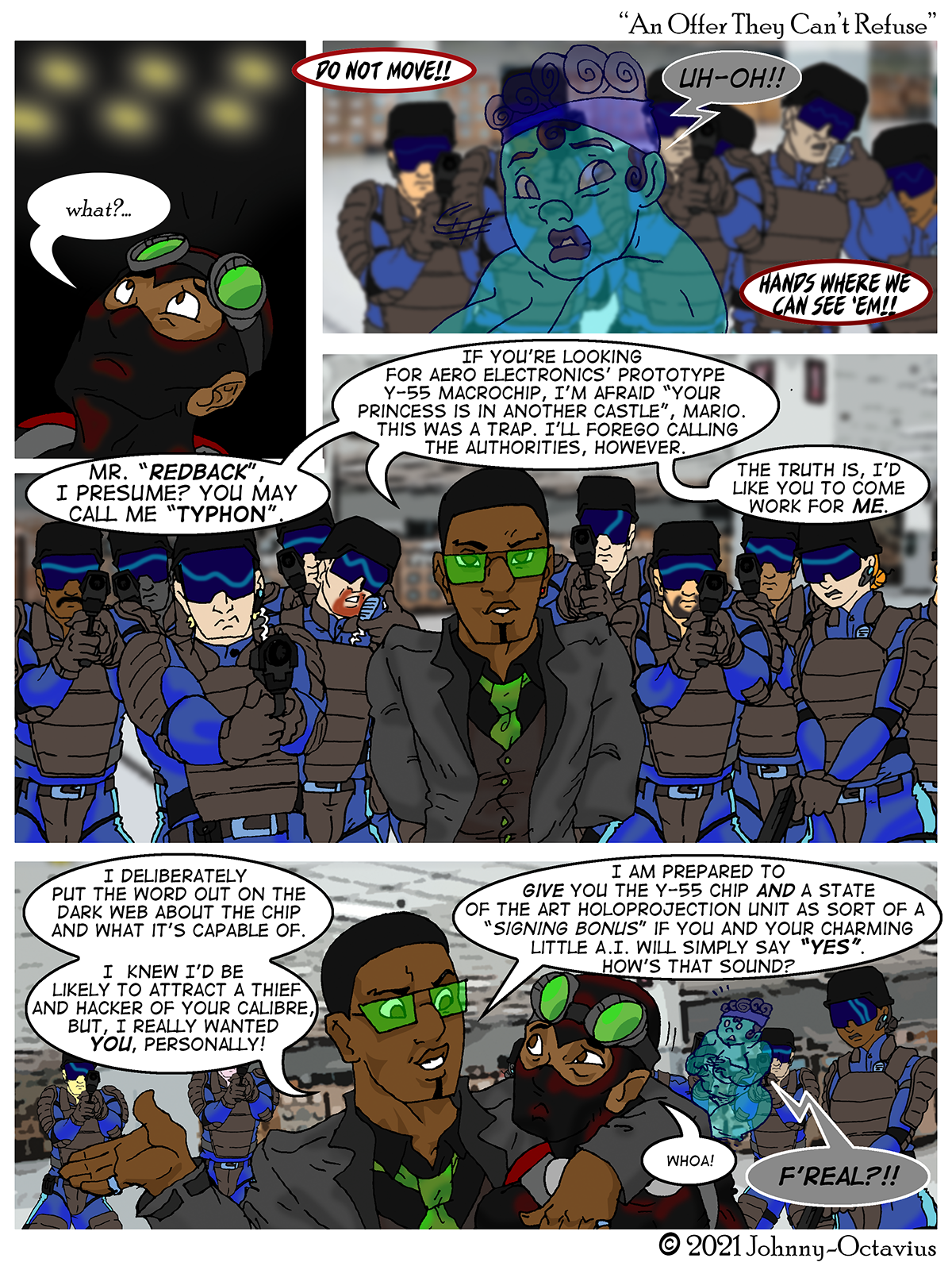 Also, I doodled a little meeting between Mr. Scarpacci (in his current look) and a certain Ms. Timmy of everyone's favorite toy company! 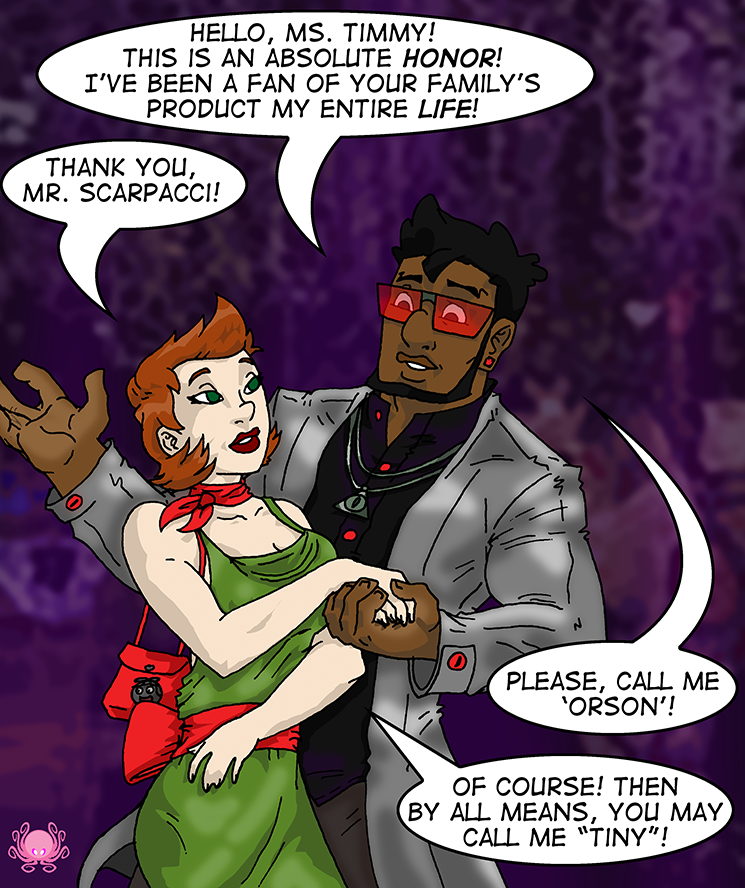 First:
"The Rise of Aero Electronics"
Orson and Polly built their company up rather quickly.
As time goes by you'll find out how.
Hint: Very special people on the payroll.
Yes, more special than the child prodigy and the hacker/thief!

Today's Update:
"The Maverick"
I know it may seem that the timeline is a bit off, but, that's deliberate.
We haven't gotten to the "here and now" of the comic, yet, but, when it happens, "Now" will be late summer 2022.
So, when it says "Three Years Ago", but the cover of New Enterprise Magazine says "August 2019", trust me, it's right.
I want to keep things relatively vague, so as not to date myself.
Let's just hope nothing CATASTROPHIC happens in the real world that throws my shit all outta whack!
It's hard enough not to succumb to the urge to put everyone in COVID masks... but then, this ain't the "real world", so, I don't really HAVE to, if I don't wanna.

I am getting further into building my buffer, so, the strip may just drop Monday through Friday next week!
Fingers crossed!

Today's page introduces telejournalist and interviewer Janet Foster, and her LIVE interview show, "Spotlight".
She is named after a certain someone from my own IRL past. you'll see more of her.
Also, Polly Watkins' personal assistant, Kevin Albrecht!
You'll definitely see more of him!

Below the cut, there's rudimentary scribbles of other cast members that will pop up later in the story. 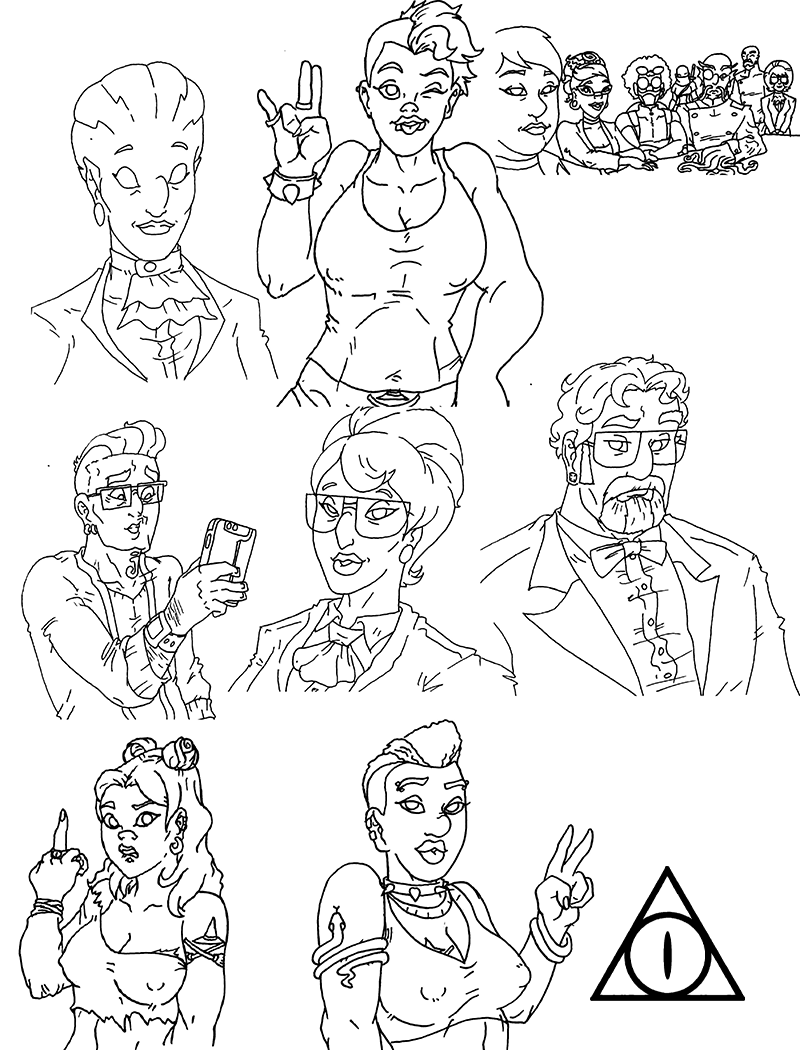 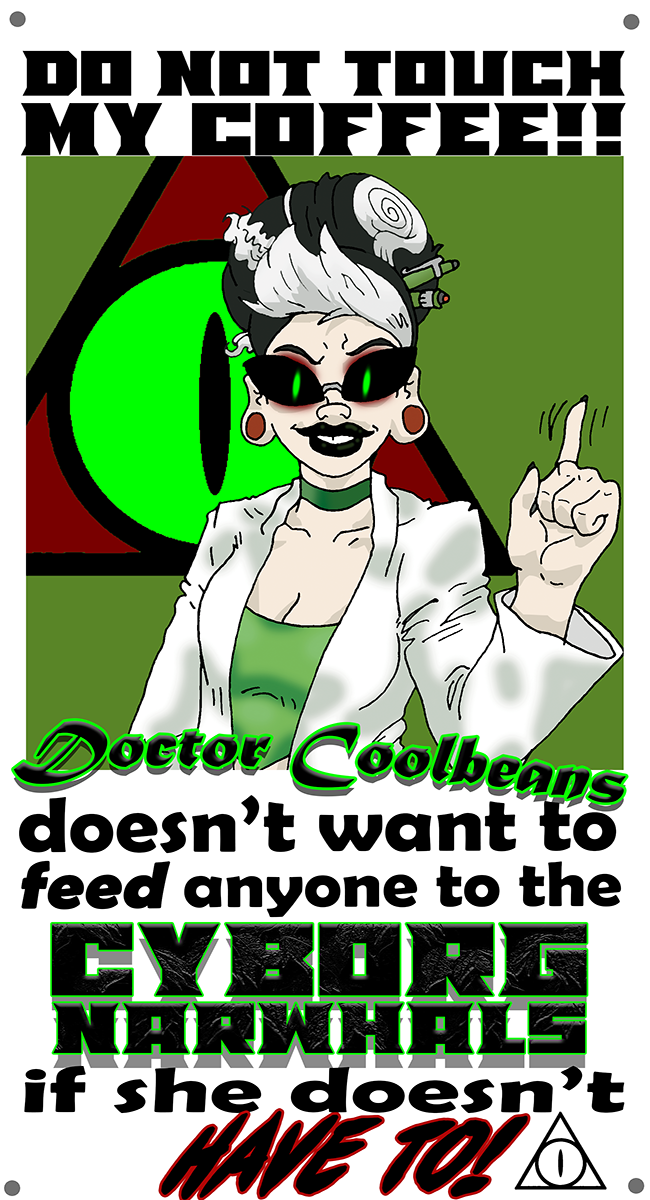 Posts: 240
Registration date: 7th Aug 2020
Location: PNW
Another page up.
Another soon-to-be-recurring character is introduced.
Say hello to Mr. Renfield, everyone!
We also get a glimpse into Orson's "fan club", with Polly's personal assistant, Kevin Albrecht. 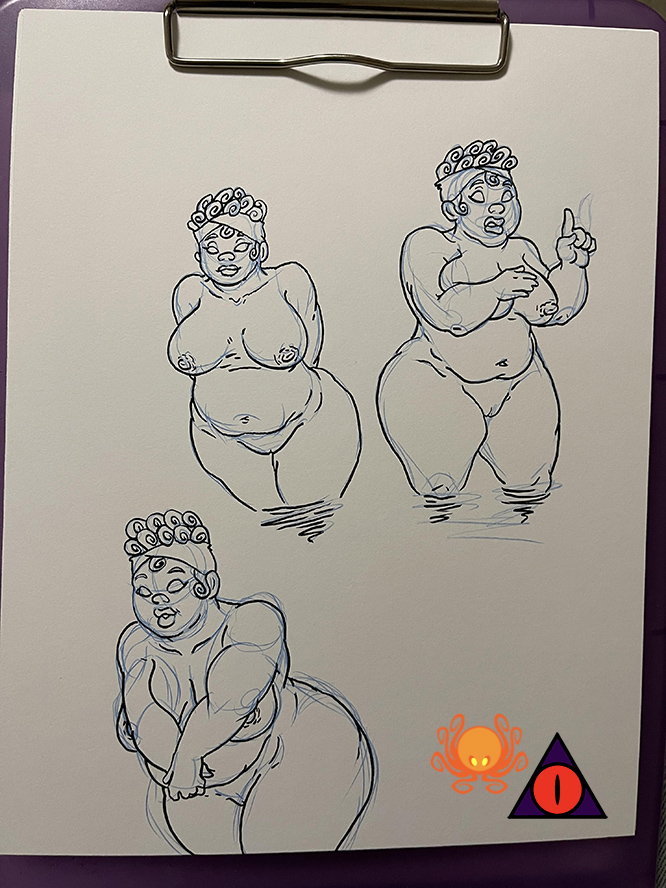 Polly is not loving the way things are going.
Kevin is... loving SOMEthing!
The 'relationship' will be explored in the next chapter or two of the story.

Posts: 240
Registration date: 7th Aug 2020
Location: PNW
Another page up.
Orson meets up with Dr. Ramsid Harlo.
(How good are you at anagrams?)

Tomorrow, another page goes up and I have just pre-loaded Monday's page.
Gotta build that buffer back up, but, this being "Eat Yourself Into a Tryptophan Coma Weekend", that MIGHT not happen.
See ya on Monday, then, hopefully again on Tuesday!

Posts: 240
Registration date: 7th Aug 2020
Location: PNW
The new page is up and we get a good look at DOCTOR CHIMERA - as he looked a few years ago.
Note the skin tone, as opposed to his modern coloring... among other things. 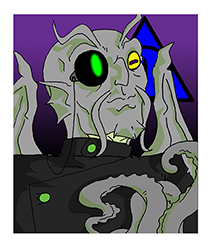 The weekend has come, so, you get 2 days off from my nonsense, and updates will resume on Monday!
I hope everyone had a good Thanksgiving yesterday and isn't subjecting themself to the madness of Black Friday today.

I leave you with a scribble:
The way to Dr. Coolbeans' heart (among other things) is through her caffeine addiction! 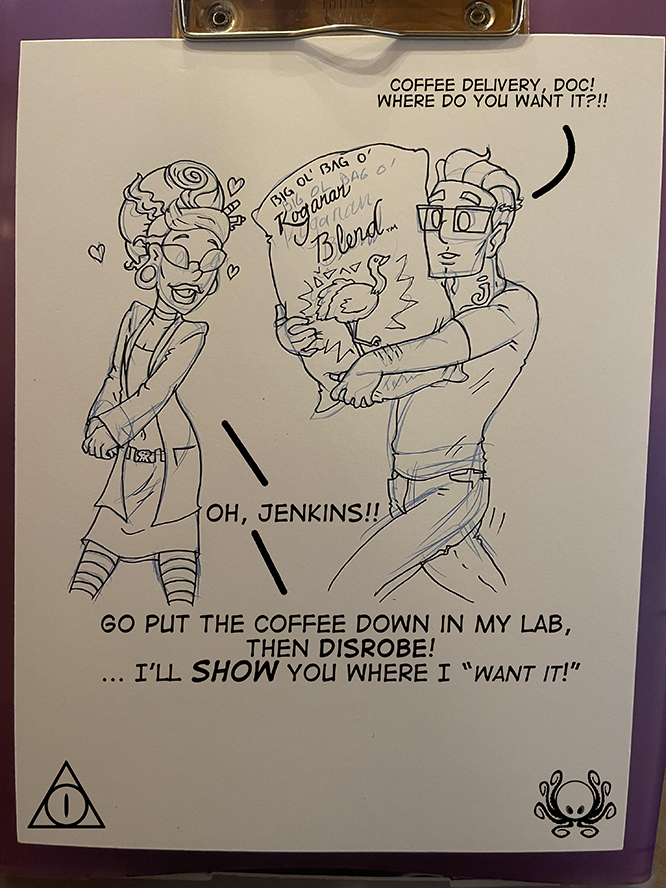 I'm thinking that I might make more little scribbles like this (complete and in color, of course) and just them for between-chapter fillers.
(For ALL my comics)
I wanted to make them more chibi-ish, but, that might attract trolls.