Mysterious Missouri's oldest: Camilla Blackwood.
She's human/jiangshi Dhampir born in late Georgian era Yorkshire England. She doesn't really keep track of her exact age. Camilla looks older than an ageless undead should, because her years of substance abuse in the 1950s hit her human-half pretty hard. She COULD restore her never-age-past-your-30s appearance by draining all of the lifeforce out of a human, but she's not that kind of person.

Mysterious Missouri's youngest: Joy Kinsey.
Born in 1994, she was a housecat who was transformed into a form of a girl on anime poster, when her owner was granted "A woman who will love you just as much as your cat does" by a genie. Unfortunately for said nerd, she really didn't think very highly of him and left. Being a magical creature, Joy doesn't age.
One week ago, 12:48 PM #2
Zero Hour

Posts: 1213
Registration date: 3rd Dec 2019
Location: Helsinki
Wilburg, Judoch's sister, is youngest being five years old at the start of Crimson Knights and eight years oldby the end of it.

The oldest of the primary cast is either Mot, who's about 60 years old, but being a goblin he's only at halfway point of his lifespan.

Alice is about to turn 17 at the start of the zombie apocalypse. She lives with her mother in an apartment in the city and doesnt get infected because she's very socially reclusive. Alice's mother gets infected in the outbreak and takes her own life rather than becoming a zombie or forcing her daughter to kill her. Alice has a few friends who survived the outbreak who turn up later and her estranged father makes an appearance.

Simon is 32 years old and he's a sci-fi author from California who got his big break writing a young adult mystery series. He has dwarfism and he comes to Australia semi regularly to have treatment for some of the associated issues. (He gets free medical treatment here because he's a citizen of both countries.) As a result he ends up far from home during the zombie apocalypse and forced into a group with some random teens to survive.

There are older characters in the restless dead but they aren't innthe main cast and the oldest character in the comic was actually made up by Killer Steak.
_______________________

Posts: 3077
Registration date: 26th Jun 2015
Location: Somewhere In Michigan
Going to stick to main characters / important enough side characters so that it’s easier to think about.

Some of these answers are going to be more complicated because we’re dealing with aliens and years does not equal true maturity level, so yeah.

Technically the oldest is Umella at 719 years old, but she's a Celestial Child and they live quite a long time. She’s technically more like 20 or 21 in physical maturity, so in reality she’s one of the youngest characters.

If we’re going for the truly oldest character in terms of physical maturity, that would be Faris who is 35 in both actual and physical years.

For youngest, technically it would be Beatrice because she’s 0 years old, but she was built to be 25 years old. Next youngest is Ryan Cee at 7, but he’s physically 20 years old. This would mean that the truly youngest is Scott Pumpernickel at 19 years old in both actual and physical.

Just also wanted to point out that while Ellenora may appear a bit older, she’s 24 in both actual and physical, which makes her basically younger than both Beatrice and Taylor.
_______________________

Age is currently unknown, but he is older by far than the main cast. Very little is known about him; no one even knows what species he is. He owns a mansion, inherited from his father, that he's always wanted to turn into a museum/university of sorts.

Vivacious, melodramatic and crazy for boys, Jenny can easily be dismissed as a hyperactive ditz. Those who get to know her, however, find someone who is loving and perceptive, with a lot of depth. She doesn't know much, if anything, about her past. Her earliest memories are of wandering the streets till meeting Kayla, around age 14.

One week ago, 4:06 PM #9
Carrotsandcucumbers

Posts: 349
Registration date: 23rd Jan 2019
Location: My house
The oldest main character in Quantonium with a confirmed age at the moment is Optomecron O (77) who’s an oculothorax (flying eye). In 2022, she’ll turn 80. There may be monsters who’re older than her.

Posts: 355
Registration date: 27th Dec 2018
Shadestalker's youngest character is the protagonist Grenda Schneider, who is 21. The oldest character is Hivelord Slothius, who is 52,731 Earth years old (roughly 93 years for a Pathian). However, there is one character named Agent Horsley, who despite appearing to be a human male in his late 40s, has a completely unknown age.
_______________________
Shadestalker

THE BALL IS VERY SOOTHING.

Posts: 2070
Registration date: 17th Aug 2017
Location: somewhere in chunkystew
that's an interesting thing to think about if you have important non-human characters. I'll only focus on Huckleberry's story because otherwise the post would be too long.

So, counting in human years, and disregarding main/secondary/background character tiers...

The oldest folks in this comic would be the Colors with a capital C because they're magical blobs of light (and capricious goofballs), they've been around since people started fighting over hues, probably before. Btw your shirt's color sucks, mine is better.

The youngest character so far is the Banana Ant because insect lifespans are tiny by humanoid standards. (but fantasy ants in my fantasy universe still live longer than irl ants) She's at most one-ish year old.
_______________________

Posts: 98
Registration date: 18th Nov 2019
Location: Southeast Asia
Fun Thread and a good timing for me XD
My both youngest and oldest character had already appeared in my released pages. 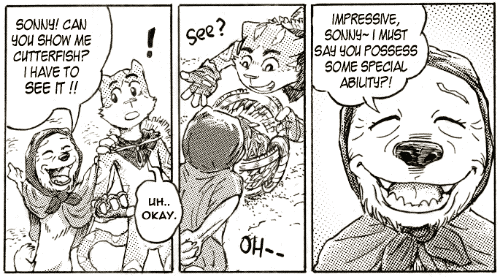 My oldest character (and also just a background one-time character, wolf lady, she's not a villager but a traveller. I've no idea how old she is in the story, but she looks the oldest. 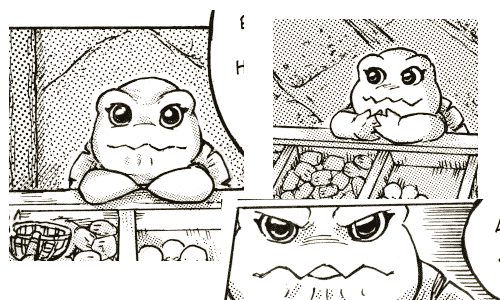 Posts: 1393
Registration date: 14th Jan 2021
Location: Trapped inside a crystal statue of a Victini
Oldest is Triumph, which is understandable since she was part of a very ancient war thousands of years ago and is still around.
Youngest depends on how you're looking at it, as in from which perspective since the story jumps around chronologically a bit, but probably Cloud, who hatched a few minutes after Rain.
_______________________
Potatoes are my favorite candy ;3

Now on Tapas - The Ace of the Spades
**Patreon**

Posts: 1125
Registration date: 24th Apr 2020
Location: Colorado, USA
Youngest creature would have to be Indigo at age 8, but Banikas only live about half the age of humans. If we're counting the actual characters and not mascots, Raylin is the youngest so far, at 16.

Complicated question. The youngest character with a confirmed age is Terrence, at 23. But Cuckoo is younger, some age under 10, but it's unknown. Age is weird for her species, and her appearance and maturity can fluctuate between around 6-12. That these numbers are similar is pure coincidence.

Oldest is Jules, a 200+ year old vampire. Lucas claims to be a similar age and acts like a Victorian gentleman, but he was actually very recently turned. Oldest major mortal is Leafa's character Rikky, 36ish. Fun fact: the original RP was present day and he was still a 70's rockstar, so much much older. The werewolves were actually older than him though, because they used to be really long lived. It made sense to change that.

There were lots of even older characters though too, then.

I have an Etsy store! And open commissions.

Oldest: Zachary & Samantha (they're twins)
They're 22.

Posts: 3924
Registration date: 19th Apr 2014
Location: Country of Beer and Sausages
The youngest would be Tarik's niece Cleo!
(At least amongst the more important characters, there're also a few other kids about the same age.)

The oldest would be the Atlanteans: Queen Yalala, Dolon, and of course Captain Camilla.
No idea about Dolon's exact age, but Yalala ought to be older than her sister Camilla - she inherited Atlantis' crown after all!
_______________________