Stats
Registration date: 25th Jul 2017
Last seen: 31st Oct 2019, 10:40 PM
Posts: 37
Comments left: 5624
Ratings given: 5 / 4308
Profile views: 4184
About Me
Amelia Pessoa signs as Amelia Woo in the U.S. comic book industry, because she had an immense pretentious to create Manga in her earlier career. Happily, she embraces all kinds of comic books, making them her main narrative media object of interest. It’s been more than a decade since she devotes her efforts as a professional in the comic book industry, working actively for U.S. publishers as Marvel, Dynamite, Radical Comics, Kymera Press, Trepidation Comics, Dark Horse, etc. Now, she is launching her own first Graphic Novel and a little short-game-3D-single-player-third-person-adventure-shooter-comicbook pulp noir-game. The game and this comic book are based on Kings Club. Kings Club universe is being developed since 2008. And... she is talking in third person about herself... 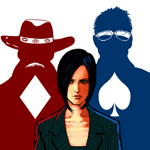 Kings Club Kings Club
Kings Club Graphic Novel Volume 1: digital-first. An Italian mafia boss' daughter has to prove her skills during a clan war, while two hired agents of a multitask worldwide mercenary organization are looking for something called "The Joker" in her family.

Update on Mondays, Wednesdays and Fridays!