Stats
Registration date: 8th Jan 2016
Last seen: 2 days ago, 7:23 PM
Posts: 0
Comments left: 152
Ratings given: 0 / 0
Profile views: 9118
About Me
GriffinJay, AKA Jason de Boer, is a Canadian cartoonist, griffin enthusiast (though it doesn't show in his art because he doesn't feel the need to push the awesomeness of griffins on others,) and reverse vampire. He has always been a fan of Star Wars, Marvel comics and an on/off anime fan.
--
If you would like to see more of my work, including character bios for some of my comics, visit griffinman.deviantart.com 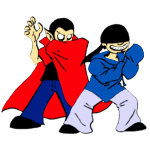 Avatars 2, which starts at at chapter 9, is the revitalizing of the series with the help of a new Co-Writter Jeff Hache. His Avatar, Russ/Sirus, begins a war on the other avatars. It is a battle of characters. Who can create the best one?
Last update: 2 days ago

Meat Head Meat Head
Meat Head and his sidekick Band-Aid Boy battle supervillains along side a city full of superhumans.
There's individuals who are born with the super-gene. When they get into a life-or-death situation, the gene kicks in and saves them by activating a superpower relevant to the situation.
Now, there is a villain without this gene who is gathering the powers of others. Heat Head and his allies must find and stop him.
Last update: 9th Nov 2020

The Tom & Wayne Show The Tom & Wayne Show
The Tom and Wayne Show was first created by Jason de Boer and Mark Mallon, and was written to be an animated talk show with various cartoon guests. Now that I've decided that I'm likely never going to have the free time, motivation, and drive to produce an animated series, I've been rewriting it into strips!
Last update: 5th Nov 2018 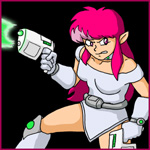 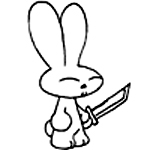 Homicidal Mutant Bunnies Homicidal Mutant Bunnies
The infamous Homicidal Mutant Bunnies are back! I invented these guys in high school with the help of my friend, Jed, and we drew them as a way to entertain ourselves during the boring classes. A few years later I reproduced them and got them published in the student union news paper at my college. Then, they spent a few years posted on my old website. And now they have returned.
This strip is marked as "completed" because most of my existing ideas for the HMBs are already here, However, whenever I have more, they will be posted.
Last update: 16th Dec 2020