My history as a webcomicist started in April 9th 2010 when I started my sprite comic "Paper Cuts" on Drunkduck. After 400 pages of the original PC, I decided to remake the comic on drawn form, as the plot was expanding so much beyond the bondaries of Megaman game plots, it was going to be huge pain in my butt to make all the necessary sprites. That's when I gave rebirth to PC here, in ComicFury. Now Paper Cuts is on hiatus to give more time to my studies and my other, less time-consuming comic project, Pokémon: Our story.

I have some other hobbies, too. Biggest one is airsoft, which I have played for about 3 years now. I started out with a British DPM kit with G36C Rifle, but nowadays I mostly use Finnish WW2 equipment. You can find my airsoft videos on my youtube channel.

The text in my videos is Finnish, but there isn't much of it. It's mainly graphical, as the safe-cased GoPro Hero2 doesn't record much sound.

I'm also addicted to "semi-retro" gaming, meaning NES and Playstation 1. I'm not a serious collector, but I sometimes buy games I happen to find. My favorite games on NES are Megaman games (well duhh), Super Mario Bros.3 and Battletoads. On PS1 my favorites are Hogs of War, Crash Bandicoot games (especially CTR) and Spyro The Dragon trilogy.

My more minor hobbies include reading, PC gaming and walking around. And I looove coffee. 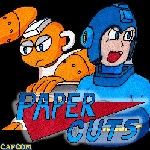 Paper Cuts
IN AN UNDETERMINED HIATUS.

In 2028, the quiet season in the clash between Megaman and the robotic forces of Dr. Wily had lasted for 10 years. Many had thought the evil doctor to be gone for good, but Megaman knew that the real end was yet to be seen...

All Megaman trademarks and characters are property of Capcom.
Last update: 17th Jun 2013

Pokémon: Our Story
A Pokémon Story written by a quartret of weird people. The illustration started as a grayscale comic, then turned into a coloured comic, and now it is an illustrated novel. Updates Mon-Fri.
Last update: 8th Feb 2016