Scott graduated from Marysville High School in 1993 and began screenwriting in 2007, after the publication of several short stories and novels, and has worked on projects for James Tucker Productions and 11th Dimension Films. He is currently involved with several projects, covering literature, film and comic books.

Critically acclaimed, best-selling author Desirée Lee is an amalgam wrapped inside of an enigma: a book junkie, vampire and self-proclaimed geek with a fascination bent toward the dark and macabre. When not writing or reading, she feeds her gaming addiction. Des loves the dark, evil characters. If word ever got out that she was secretly a level 15 paladin, her reputation would be ruined.

Des currently lives in a hole-in-the-wall town in Northern California, further away from civilization than she'd sometimes like to be. 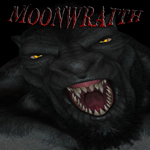 Werewolves, descendants of an original pack created centuries ago by a corrupt sorcerer, have overrun the land. The king ordered the construction of a fortress above an ancient silver mine where scholars and historians believe the talisman used by the sorcerer to create the werewolves is hidden away. This talisman is the MoonWraith.

The king's men strive to find the MoonWraith in the hopes of using the very thing that created the werewolves to destroy them. The werewolves struggle to keep the MoonWraith from being found, suspecting that it is capable of eradicating their species in one fell swoop.