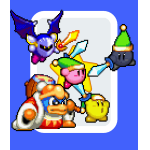 Kirby Card Clash
A Kirby fan comic I started on smackjeeves. Updates every 12 hours until brought up to date. Maybe update every 8 hours later instead.

Join Kirby on his card themed adventure as his powers get stolen by a mysterious black Kirby named Umbra. He teams up with his friends to rebuild the Master Deck and stop Umbra's madness! Contains several OCs and potential spoilers to fan RPGs I have worked on.
Last update: Today
[Comic profile] 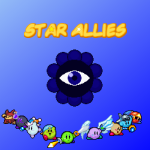 Star Allies
A Kirby fan comic originally started on SJ. I'll start uploading if I jump ship, and update daily until I run out of pages.

Manatari is the green Kirby that dual wields swords. Sol is the lavender Kirby that can conjure stars. Join them and the rest of the Star Allies as they venture across Pop Star.
Last update: 26th Dec 2019
[Comic profile]