I soon found myself writing fiction instead. That's not to say I gave up drawing - far from it. I drew often. I also usually draw my main character[s]. But I didn't quite have my sights on a cartooning career anymore, being too verbose to not write novels.

I've always loved werewolves. I wouldn't just draw them. I made sculptures. I did so throughout high school and college. Yes, a werewolf or two crept into my writing as well. Now a couple of decades since, I have returned to them. This happened after my beloved saw my drawings and insisted on being shown the werewolves eating pizza. (I would always cite this as an example of my spin on the otherwise ferocious beasts.) It rekindled my love of drawing them and with each new picture, I knew what the wolves were talking about. I inexplicably knew about the characters depicted, and they started acquiring names.

It became apparent that I should keep this up; that these characters should be developed. Thus, this webcomic.

I graduated from Knox College with Honors in 1993, majoring in Creative Writing. Without getting into a long drawn out tale that spans nearly a decade: despite an agent’s [at a highly respectable agency] insistence that my college Honors Project Peter Pan's NeverWorld (a sequel derived from J.M. Barrie's ideas & notes for more about Pan) be published, we'd hit brick walls. Many years later circumstances changed and I'd been able to publish it on my own. I also wrote an interquel Peter Pan: Betwixt-and-Between which fills in how Pan went from being an eternal infant in a famous London park (as per Barrie’s origin story Peter Pan in Kensington Gardens) to an eternal boy who fights pirates in the Neverland. I've written a few other novels not related to Pan, but have not published them as yet. 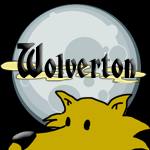 Wolverton Wolverton
Werewolves hang out and have pizza just like everyone else. But modern society tends to frown upon those who remain in werewolf form 24/7. That’s why these friendly werewolves founded their own town called Wolverton. Follow the adventures of Talbot and his friends every Wednesday. PG-13 for suggestive material.
Last update: 2 days ago