Stats
Registration date: 23rd Oct 2014
Last seen: 20th Nov 2021, 5:51 PM
Posts: 713
Comments left: 593
Ratings given: 5 / 336
Profile views: 3498
About Me
Michael Campbell is an educator working with underprivileged children, has an extensive university background in classic literature and philosophy. He has seen print, with the short story King of Rain, and has seen some of his poems published as well before he embarked on IronGate. He hopes to continue working on IronGate for a long time to come, very thoroughly enjoys working on our IronGate Extras, and absolutely loves any and all interaction he gets to enjoy from IronGate's frosty fans!

William Leighton is a classically trained 2D/ 3D animator with a background in comics, comics history and art history. He authored the now defunct Stalkers-Online for a short period of time which garnered him some success, one fan even sent him a plushie! He of course hopes to keep working on IronGate for the foreseeable future as well and genuinely loves how well received it has been, each and every comment from a fan fuels his creative fire.

Christiane HapyCow Rosin loves to draw cute and creepy things, thinks she plays too much Zelda and is the author of the fantastic webcomics Abby Normal and Lunacy Fringe! It's an honor to have her aboard, we think her colors really took our IronGate to the next level and are forever thankful for her continued contribution. Take a moment to check out both of her comics if you can and say hello over on her Tumblr, Facebook and DeviantArt!

Keizaru is an amazing professional artist that worked on IronGate from page 006 of Whiteout to 015 when she unfortunately had to bow out. We are sadly unable to share any of her beautiful works because her DeviantArt, Twitter and Facebook accounts have all been taken down. Should she ever resurface we will be sure to share her work with all of you, it really is quite brilliant and we're all missing out. 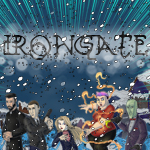 IronGate IronGate
IronGate is a finished webcomic by Michael Campbell and William Leighton with colors by Christiane HapyCow Rosin about a centuries old organization of the same name that stands against the horrifying, supernatural denizens of the dark threatening to devour our world. To gain an edge Director Marcus Thompson has created a special forces team of supernaturally afflicted people and appointed Luke Chase, not the top man in the organization, but one willing to give the idea a try, as their leader. The team has four other members besides, Amber "Embers" Benson, Father Jonathan Wright, Addison Constance Loveworth and Dorian Hallward. 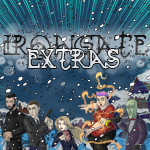 Irongate Extras Irongate Extras
IronGate is a webcomic by Michael Campbell and William Leighton with colors by Keizaru about a centuries old organization of the same name. This site features extra content made by the creators of IronGate for their frosty, awesome fans.
Last update: 14th Feb 2017