My name is Allen Steadham and I've been a comic creator since 1980. I have previously co-written and drawn Due East, the award-winning Best Spiritual Comic (2008) and finalist for Most Profound Comic (2008). I have been happily interracially married since 1995 and we have three kids.

I am a nondenominational Christian, as is my wife. We have been in a Christian band together since 1997. I play electric bass guitar and sing. My wife sings and plays viola and violin.

I also write Christian fiction novels. I released a superhero thriller novel Mindfire on April 19, 2019 through my publisher, Ambassador International. My second novel, a science-fantasy called Jordan's World, was released July 1, 2019. The next book in that series is called Jordan's Arrow and was released February 7, 2020. The final book in the trilogy is Jordan's Deliverance and it was released October 20, 2020. As of August 2021, I have a short story "The Fate of Transport 80-14" published in the Christian science fiction anthology Into The Unknown: Seven Tales of Faith and Bravery.

My next novel, The Former Things, will be published by Ambassador International on July 12, 2022. It is a Christian fiction story told from the perspective of an atheist.

You can access all my books AT THIS LINK. 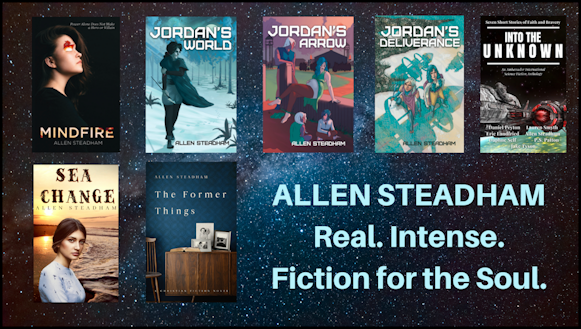 Due East Due East
A multiracial family tries to come back together after a painful divorce and six years of separation. This is a Christian webcomic that doesn't beat you over the head with its message.
Last update: 6th Jan 2014