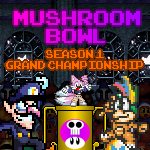 Mushroom Bowl: Season 1
Welcome to the Mushroom Bowl battle tournament, where select Mario characters compete for the title of Mushroom Bowl Grand Champion and a whole lotta money! This archive is of the entire Season 1 run, with text-based battles all the way up to the Grand Championship match presented in Sprite-o-Vision! (That is, as a webcomic.)